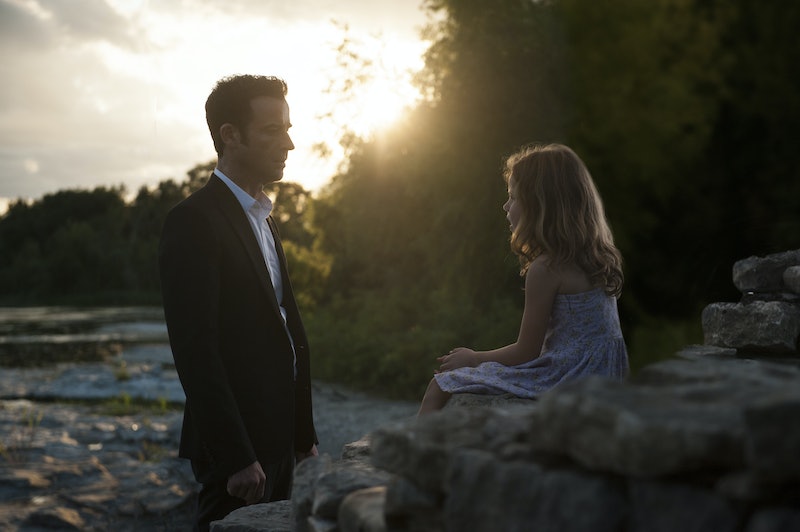 In June of 2014, HBO debuted their new drama created by Lost showrunner Damon Lindelof, based on a novel by Tom Perrotta (Little Children, Election). To say it was divisive in its first season would be an understatement. While many people were sucked into the grief-stricken world of The Leftovers, just as many were turned off by the relentlessly bleak tone. Imagine everyone's surprise, then, when in its second season, The Leftovers transformed seemingly overnight from controversial conversation piece into universally acclaimed must-watch television. As Season 2 draws to its explosive conclusion this Sunday night, its fans are probably wondering... Will there be a Season 3 of The Leftovers ? [UPDATE: An HBO press release confirms the show will return for a third and final season.]

If there is any justice in this world, the answer will be "yes," if only so the terrific cast — including Justin Theroux, Carrie Coon, Regina King, Christopher Eccleston, and Amy Brenneman — can continue to grace our screens on Sunday evenings. But judging solely by the ratings, a renewal sadly seems like a long shot. The first season of The Leftovers did modestly well for a cable network; naturally, its ratings were nowhere near the behemoth that is Game Of Thrones, but it premiered to 1.77 million viewers and showed very little attrition over its 10 divisive episodes, ending with 1.53 million viewers.

Despite Season 2 having received universally rapturous reviews in advance of its premiere, the first episode back in October garnered only 713,000 viewers — that's a precipitous 60% decline from Season 1's premiere. Given that most people agreed Season 1 improved over its run and ended strongly, combined with the new season's glowing reception and intriguing new location, what accounts for such a drastic decrease in viewership?

That would likely be the show's time slot. In Season 1, The Leftovers ran in the summer, from June through September, airing after episodes of the final season of True Blood. In Season 2, The Leftovers is running in the fall, from October through December, with no help from a popular lead-in — and during the busiest time slot of the week, no less: 9 p.m. on Sundays also plays host to Sunday Night Football on NBC, The Good Wife on CBS, Homeland on Showtime, and (most damningly) The Walking Dead on AMC.

Airing against the highest-rated scripted program on television is obviously bad in the sense that it chips away at The Leftovers' ratings; but it might also be a good thing in the end. HBO must have known that airing their modest drama opposite AMC's splashy zombie series would have an adverse affect on The Leftovers. If the show's ratings mattered to them all that much, they probably never would have put it in that time slot to begin with. And in fact, ratings have gone up over the course of the season; the most recent episode, "Ten Thirteen," drew 861,000 viewers — Season 2's biggest audience yet — against The Walking Dead's much-hyped midseason finale.

It's true that ratings don't matter as much to HBO as they do to a traditional network. Like Netflix, HBO makes its money from subscribers, not advertisers — so they can afford to support lower-rated shows as long as they have a few buzzy titles (like Game Of Thrones) drawing subscribers to their service. For example: Hospital dramedy Getting On was renewed for a third and final season despite the fact that its Season 2 ratings ended at 209,000 viewers. Sure, a six-episode half-hour comedy obviously costs less to produce than a 10-episode hour-long drama, but Getting On's renewal proves that HBO cares more about quality and acclaim than Live+Same Day ratings.

While I am trying to be optimistic, I also have to admit that a third season is far from a sure thing. The Season 2 renewal was officially announced on Aug. 13, 2014, when there were still three episodes left to go in Season 1. The fact that we're heading into the Season 2 finale this Sunday with no word from HBO on a possible Season 3 isn't exactly encouraging. But, late renewals aren't unheard of, either: That aforementioned final season renewal for Getting On didn't come until eight weeks after the Season 2 finale had aired. So it's definitely not too late for The Leftovers, either.

Author Tom Perrotta, who serves as co-showrunner with Lindelof, admitted last weekend that talks for Season 3 hadn't even begun yet. "We have some vague ideas, but we don't even know if there will be a Season 3. That's the question we're waiting to get answered," he told Indiewire. "I think one of the things is that post-production for the finale has just been wrapped up and people went on vacation. It will all be discussed, but at the moment there hasn't been a lot of discussion."

But, hey — Season 2 almost didn't happen, either, and look how that turned out: With the show's strongest batch of episodes yet. Season 1 exhausted all of the source material of Perrotta's novel, and Lindelof wasn't sure there was any story left to tell. "When the first season ended, I was certainly of the mind of, 'Well, maybe we’re done. Maybe this is all there is. We just did a season, ten episodes, of this thing. Is there a compelling reason to continue?'" he told The Hollywood Reporter in advance of the Season 2 premiere. Ultimately, he said, "we were really interested in this idea of breaking free of the grief cycle. I wanted to watch a show about people who were trying to feel better, versus people who are stuck in this washer cycle of mystery. So we started getting excited about some of those ideas and went to HBO and said, 'Would you be interested in watching this show?'"

The answer, obviously, was yes; and thank god it was, because Season 2 of The Leftovers was one of the strongest seasons of television in recent memory. Hopefully Lindelof decides he has even more story he wants to tell; and hopefully HBO will decide to let him tell it.

More like this
Ava DuVernay Thought The 'Queen Sugar' Series Finale Felt “Really Satisfying”
By Brad Witter
Will 'The Walking Dead' Return For Season 12?
By Grace Wehniainen
Our First Look At 'Vardy V Rooney: A Courtroom Drama' Doesn’t Disappoint
By Bustle UK
'Bridgerton' S3 Teases Exciting Social Season For Penelope Featherington
By Bustle
Get Even More From Bustle — Sign Up For The Newsletter