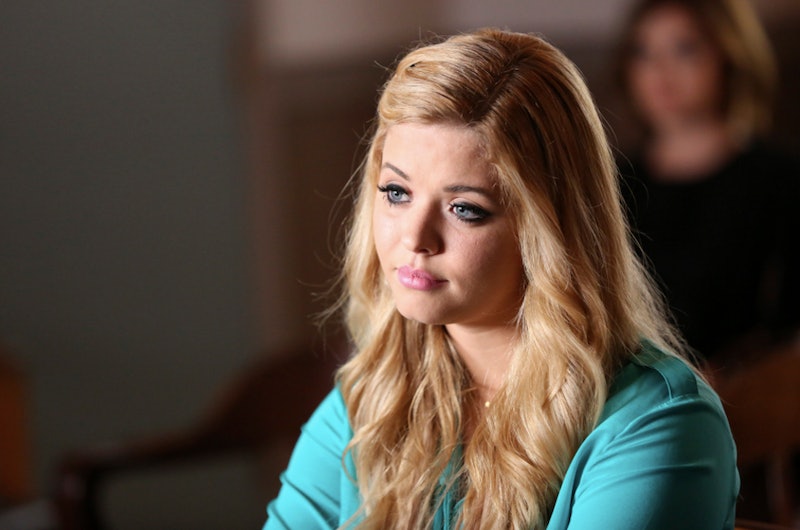 Alison DiLaurentis is a pretty polarizing character on Pretty Little Liars. Her crazy life of lies is what got her friends involved with the A mystery in the first place, so I can see why fans, as well as the characters on the show, would resent her a little. At the same time, there would be no Pretty Little Liars without Ali DiLaurentis. Love her or hate her, she is the one who gives this show life. This girl doesn't bite her tongue and there are plenty of times when Alison DiLaurentis said what we were all thinking.

On some level, everyone who "hates" Ali actually has some love for her. There's just something about her. She is a walking juxtaposition. She is a beautiful girl, who has done some ugly things. She is an admitted liar, who loves to share her honest opinion. She is a bully, who has been victimized. There is just so much contradiction when it comes Alison DiLaurentis and that is why I can't believe that anyone would truly hate her.

My favorite thing about Ali is that she always speaks her mind. If only she could speak her mind on your behalf. Her quotes are applicable to many real life situations.

1. When Your Friend Falls For A Bad Boy

We all have that one friend who thinks that she can charm her way into making a boy treat her right, but bad boys are bad boys. No one can change them.

2. When You Are Half Way Through Getting A Gel Manicure Removed

As the old adage goes, "beauty is pain," and anyone who's ever had a gel manicure removed knows that. From the soaking, to the filing, to the drilling, it really is a painful process.

3. When Your Friend Finally Breaks Up With Her Awful Boyfriend

You know the friend I'm talking about. She say's she's "really done this time" just about every other week, but no changes are ever made. When it finally does happen, you're bound to be pretty shocked.

4. When Your Period Is Late

Every thought possible runs through your mind when your period is late. and Ali was just keeping it real with this sentiment.

5. When A Dude Hits On You At The Club

There's nothing more annoying than when you're trying to have a girls night out and some gross guy that you don't even know thinks he can touch you on the dance floor. Please don't.

6. When Your Friend Gets Screwed Over By A Dude

The only thing worse than getting hurt by a boy is seeing a boy hurt your friend. If your friend has a problem with a guy, then you cannot help being offended on her behalf.

7. When Your Friend Will Not Stop Talking About Her Ex

There's nothing wrong with dwelling over a breakup, but when that's all your friend can talk about, it gets old — real quick. Sometimes your friends just need to hear the truth. Not that you have the guts to say it, but we all know Ali does.

8. When A Friend Is Disappointed That You Want To Get With Your Ex

It's your life. You can do whatever and whoever you want. There's no reason to let anyone judge you.

If only you could play it cool when you get texts like this. Instead you probably explode with rage or get sucked into a conversation with that loser again.

10. When Your Ex Says That He Knows You Better Than Anyone Else

If your ex really knew you that well, wouldn't you two still be together?

11. When Your Friend Gets A Little Too Sassy

There's something to be said for picking your battles, but sometimes you just want to snap back at a friend with an attitude problem. You'd never do it, but it would feel liberating to channel your inner Ali every once in a while.

12. When Your Friends Make Plans Without You

FOMO is very real and as much as you want the best for your friends, you would rather them not have epic times unless you are involved. It's best for everyone that way.

13. When Someone Is Playing Games With Your Heart

Sometimes you just wish you had that Alison level confidence to speak your mind and be straight up.

It's so annoying when people ask this question. It puts on a lot of pressure to make it seem like you have your life together. Instead of coming up with some polite answer to placate someone nosy, it would be great to channel your inner Ali and admit that you wish you were someone else sometimes.

15. When Someone Under Estimates You During Hard Times

Don't let anyone count you out when you're down. You can always rise up if you are determined. You just should probably be less blunt than Ali is.

16. When Someone Calls You Out For Sharing Your Opinion

Ali wouldn't care, and that's the kind of confidence we should all have.

If only we could all pull off these Alison one-liners. The world would definitely be a more honest place, that's for sure.