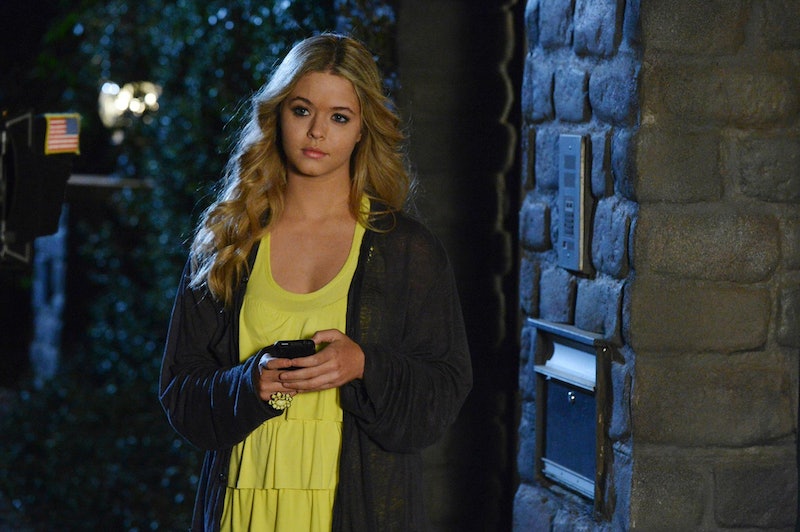 (Warning! Spoilers a-plenty!) Despite the Halloween episode of Pretty Little Liars being downright disappointing, it did tell us something that we only suspected from the Season 3 finale — Alison DiLaurentis, the dead girl whose found body kicked off all the drama on Pretty Little Liars , was never dead at all. Ali D faked her death and fled Rosewood, leaving her four best friends in the dark with an evil stalker on their tail.

If you're a fan of the Pretty Little Liars book series, you've probably suspected this all along. I suspected it and was slightly bummed when it turned out to be true — I wished the show would have taken a sharp turn and made Ali's death the ultimate "gotcha!" twist. After all, the girls had seen Ali for years — in hallucinations, in dreams, in windows — that it seemed obvious that she (or someone who looked an awful lot like her) would return to Rosewood eventually.

But now that Ali is alive — and, once again, on the run — we need to asses exactly what this mean girl has been up to in the past few years. Like Aria observed in the winter premiere, Ali being alive should make the girls unbelievably happy — and it doesn't. Why? Perhaps because they have a sneaking suspicion that Ali might actually be up to no good. Here's why I think that Ali is more than just the liars' bitchiest friend — and that she might actually be out to hurt them.

Ali Shows Up Whenever The Girls Are In Trouble

Ali has conveniently shown up in someway to the girls whenever they are in their most dire, desperate situation. She apparently dragged Emily out of a gas-filled barn. She came to see Hanna after Mona ran her down with her car. She appeared to Spencer during her time at Radley. Sure, Ali wasn't the one who put the girls in danger — but whose to say that she hasn't been pulling the strings the entire time? Mona said that Red Coat was the one in charge. We know that Cece dressed up as Red Coat — but what if it was actually Ali giving A all of the orders? Ali could easily want her friends to think that she was protecting them in order to build their trust. Ali has always been fond of games...

Ali Was A Total Bully

Is Ali 'A'? It doesn't seem like it, but she does have a history of bullying behavior. Her cruelty cut people so deep that years later they still want revenge — just look at what happened to Mona. And it wasn't just the people she hated that she acted cruel towards — she was harsh to her closest friends as well.

Ali Lies To Get Her Way

Remember when Ali told Aria that she found her father's mistresses' earring on his couch, only for Aria to realize that it was never hers? Clearly, lying to get what she wants is a piece of cake for Alison. Not only is she a master at lying, but she's also a master an manipulating people's emotions. She faked sympathy for Hanna's food issues, only to encourage her to engage in dangerous eating disordered behaviors. She played into Emily's romantic feelings towards her only to shut her down cruelly later. Ali may seem like she's terrified of someone in Rosewood, but what if she's faking that emotion, too — and she has an even bigger reason to head out of town?

She's Hiding Something From The Liars

Even if Ali isn't out to hurt the liars, she's hiding something big from them. If she's afraid of getting hurt by an ex-boyfriend (say, board shorts? Ezra?) there are plenty of ways to protect herself. This means that Ali must have something big that she's keeping from her friends. Did Ali kill someone, and now their loved ones are seeking vengeance? Whatever it is, it can't be good.

She's Involved With The N.A.T. Club (Who Keep Dying)

The N.A.T. Club used to film people around Rosewood, collecting secrets and gross videos of underage girls changing in their bedrooms. Ali dated Ian and knew about their club, and Ian was definitely filming Ali and the girls. Could Ian have filmed Alison doing something terrible and blackmailed her? After all, someone keeps murdering the N.A.T. Club members — we always assumed it was 'A', but what if 'A' just knows that Alison is behind the killings?