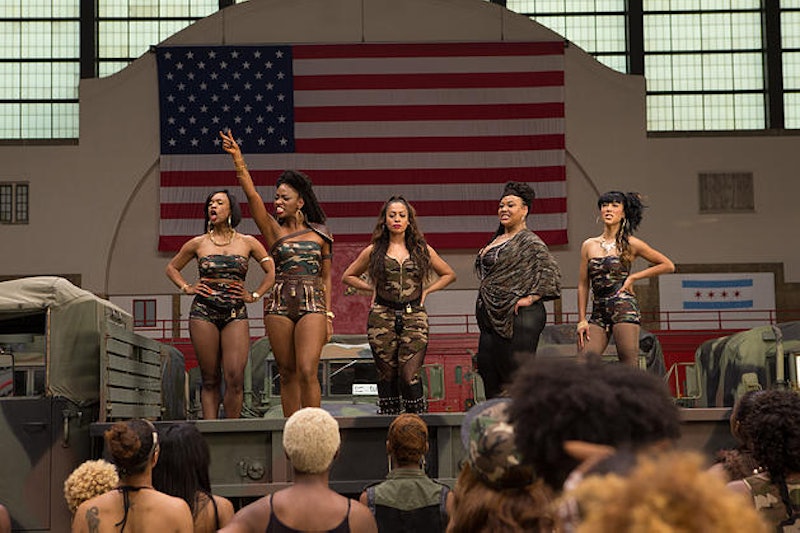 Week after week, the public is reminded of the urgency that envelops America’s flaring infection with gun violence. With every new instance of terror, the encouragement to incite conversation toward a solution grows louder. But with progress consistently out of reach, it is easy to grow tired and sore of throat. In the face of familiar tragedies and redundant rhetoric, many people are no longer aware of how to further stomach what so often feels like an act of futility. Yet while watching a movie about the issue isn't the answer, of course, it can bring some solace, and Spike Lee’s newest film Chi-Raq offers at least one suggestion for keeping footing in this all-important war.

And it does so in a very unique way. Chi-Raq has significant comedic elements, most notable in how it uses rhyme scheme to tell its story. The film expenses no rhythm in the transition from its overture (star Nick Cannon’s “Pray 4 My City” accompanied by a kinetic typography-style display of the song’s lyrics) to the compelling command of Samuel L. Jackson as the omniscient narrator Dolmedes. His harmonic account of life in contemporary South Side Chicago’s notorious neighborhood of Englewood — a realm defined by sultry romance, impassioned rap music, vibrant street corners, and a festering plague of horrible and miserable gun violence — is delivered entirely in rhyme. More unbelievably, this habit is shared by every other character to grace the screen.

But Chi-Raq doesn't diminish the severity of the city's violence with its rhymes. The blaring declaration of a state of emergency, the recitation of nightmarish statistics, and the onscreen shoot-up of a crowded dance club all insist that Chi-Raq has nothing but solemn respect for the conflict that transcends the margins of its runtime. So how, then, does Lee jump from such serious issues to absurd scenes like those in which heroine Lysistrata (Teyonah Parris) leads a household of gang-adjacent women in a pledge of abstinence, and dupes a blindfolded army general into mounting a giant canon under the guise of imminent coitus?

It's all due to balance. Chi-Raq isn't a steady descent from magnitude to madness; instead, the film varies its tones rather keenly, interweaving the likes of a sermon (as delivered by a neighborhood pastor, played by John Cusack) about the brutality that has affected the children of Chicago, with episodes of downright goofiness — notably, the systematic neutering of a uber-masculine troupe of freemasons.

In incorporating comedy and satire along with real drama and statistics, Lee sustains the palatability of the gun violence conversation, which has all but exhausted the country of its spirits and wits. This fatigue is something of which the filmmaker is keenly aware, as evidenced by the fact that even the characters in Chi-Raq that are steeped immediately in violence wrestle with the will to step toward repairing their worlds.

Fans of Lee will know that this isn’t the first time he has harmonized disparate tones to yield something of such importance. In 1989, the filmmaker released his second film and unofficial magnum opus, Do the Right Thing, which enjoys the whimsical heights of a musical Brooklyn street corner and braves the depths of racism, police brutality, and murder. Chi-Raq honors this tonal torch, becoming more of a spiritual successor to Lee's masterpiece than the so-touted Red Hook Summer ended up being. In turn, it's the director's most ingenious film in a decade.

If you take a look at what Twitter has to suggest about Chi-Raq, you’ll find a lot of language you'd expect to associate with a film that targets its energies toward castigating American gun violence. LA Times critic Amy Nicholson called Chi-Raq “angry” and “passionate,” while Rolling Stone’s David Ehrlich echoed these sentiments with similar descriptors like “clear-eyed” and “pissed as hell.” However, Nicholson and Ehrlich also called the movie “funny” and “playful," respectively, in these very same posts, suggesting that Chi-Raq’s embodiment of so many traits is more of an achievement in filmmaking than a paradox.

And comedic elements aside, Chi-Raq couldn’t possibly take the matter of gun violence more seriously. Its use of spoken rhyme, satirical plot devices, and a few diabolically silly characters and sequences don’t serve to undercut its message, but to encourage viewers' sustained attention to it. As disillusioning as every new week in America might feel these days, Chi-Raq is a reminder that we need to keep thinking, talking, and fighting, and work towards creating new solutions, suggestions, and, simply, ideas. In this department, Lee’s latest work is rich, as in in its discussion of the whys of the American gun violence epidemic and the hows of bringing it to an end, Chi-Raq does not produce easy answers. But it does offer plenty to think about.