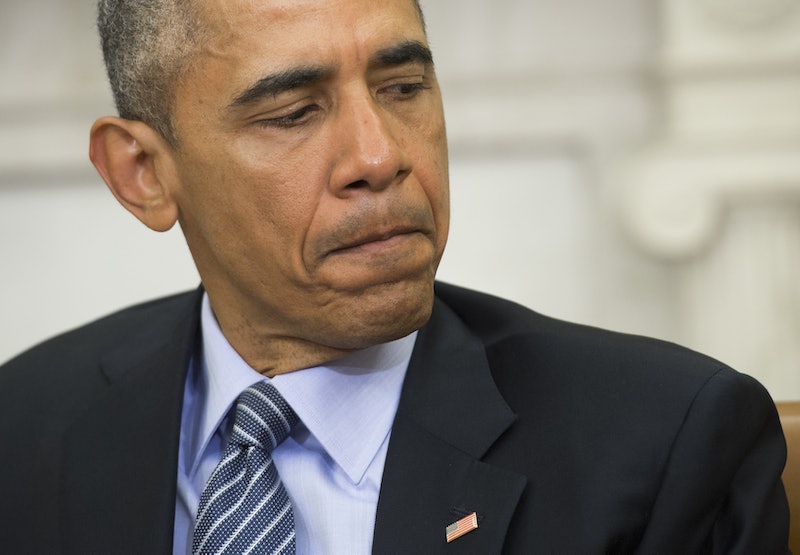 On Thursday morning, President Obama commented on the San Bernardino shooting in a statement from the Oval Office. The president offered his condolences to those who had been affected by the tragedy and vowed "we will get to the bottom of this." When addressing terrorism concerns, Obama said, "We don't know" and added that the suspects, who are now deceased, may have had "mixed motives" for the shooting, which will make the case more complicated to investigate. His main message was "We all have a part to play" in preventing mass shootings like this. After making numerous similar statements on a slew of mass shootings during his presidency, Obama was visibly weary when speaking about San Bernardino.

As law enforcement continues to investigate the shooting for possible motives, Obama reiterated, "At this stage we do not yet know why this terrible event occurred." Horrific crimes like this are already difficult enough to accept and move past, but the uncertainty of the circumstances and reasons for the San Bernardino shooting make it even harder to grasp. However, one thing is for certain: more lives have been lost because of guns.

In an interview with CBS News moments after news of the shooting broke, Obama once again addressed the need for more gun control in the U.S.

We don't yet know what the motives of the shooters are but what we do know is that there are steps we can take to make Americans safer. We should never think that this is just something that just happens in the ordinary course of events because it doesn't happen with the same frequency in other countries.

On Tuesday, just one day before the San Bernardino shooting, Obama commented on the Planned Parenthood shooting that occurred last Friday in Colorado Springs. He echoed the same sentiment then, not knowing he'd be reiterating his point just a day later:

I mean, I say this every time we go one of these mass shootings, this just doesn't happen in other countries.

On Wednesday morning, multiple gunmen entered the Inland Regional Center, a health facility for people with developmental problems, and opened fire, killing 14 people and injuring 21 more. Later that evening, law enforcement officials identified the suspects as Syed Farook and Tashfeen Malik, who several sources have confirmed were married with a baby.