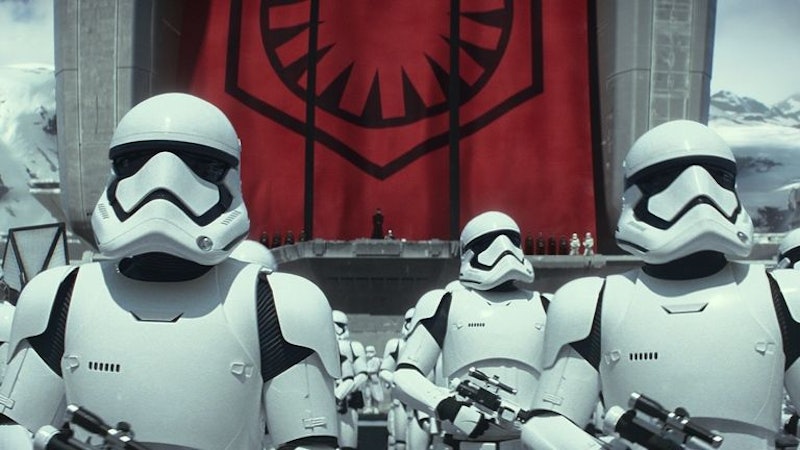 Star Wars: The Force Awakens, which opens in theaters Dec. 18, is being firmly kept under wraps. There is only so much that is currently known about the new character additions to the cast, as well as the film's storyline. The mystery surrounding the upcoming Star Wars film will no doubt push an even larger drive to the box office opening weekend, thus setting up the film to potentially break all kinds of box office records. The Force Awakens is certainly one of the biggest pop cultural events of the year, and yet, the secrecy surrounding it may very well cause the film to lose out on a few awards. With the nods being announced next week on Dec. 10, curious minds are wondering if Star Wars is eligible for Golden Globe nominations, or if it won't make the cut.

Don't start putting in your bets just yet, awards show junkies. According to The Wrap, Disney and Lucasfilm are more concerned with keeping the secret plot of The Force Awakens a secret than racking up awards this season. The film wasn't put into consideration for this year's National Board of Review's Best Film honor list, which came out Dec. 1, and it's likely it'll follow suit with the other upcoming awards.

Furthermore, the film hasn't been available for early press screenings. While such a move may be frustrating for critics and lucky audiences, it's a smart move that I personally support. It speaks volumes about preserving the excitement and freshness of seeing a film in theaters, unaffected by reviews read beforehand. Fans will be able to form their own opinions about the movie without the temptation of looking up a critic's take. This highly anticipated Star Wars film is one that is bound to stand on its own without input from anyone else. Marshall Fine, chairman of the New York Film Critics Circle, said it best, telling The Wrap:

"No one who is thinking about seeing Star Wars is waiting for the critics to weigh in on this film, whether with awards or with reviews, to decide whether to buy a ticket. This movie won’t need awards to draw a crowd."

The Force Awakens has only been teased in maddening snippets thus far. In a recent interview with director J.J. Abrams on The Howard Stern Show, Abrams gave some insight by addressing the missing Luke Skywalker issue. According to Variety, he said,

"I hate when I go and see a trailer and I feel like I’ve just seen the whole movie in an encapsulated form, it makes me nuts ... I’d rather be asking questions and feel that they’d been answered for me [by the film]."

Abrams also spoke about the nerves he felt of screening the first cut of the film to Disney executives. "It was horrifying," he said. "I’m nervous beyond words, I’m showing this movie that I know is so far from finished, there’s not an effect in it." However, he felt relieved after garnering a positive reaction from the execs — which is probably the closest fans will get to a review of The Force Awakens at this point.