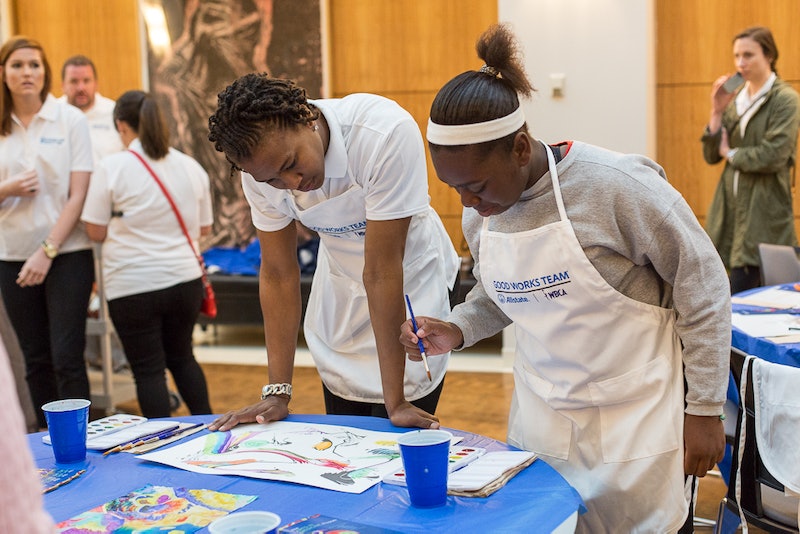 But, Catchings is also an MVP off the court. Her foundation, Catch The Stars, which helps empower youth ages 7-15 through literacy, fitness and mentoring, will be celebrating its 12th year in 2016. The Indiana Fever star is also an ambassador for Allstate’s WBCA Good Works team, which honors outstanding collegiate basketball players who excel not just on the paint, but in giving back through volunteering and civic-engagement.

In the season of giving, Catchings talked to Bustle about where her passion for giving back comes from and how sports helped give her confidence at a young age. Now she looks to deliver for the next generation.

“I got an opportunity to be involved with [Allstate] WBCA Good Works team from the beginning.” Catchings says. “For our student athletes that are still in college, it’s about shining a light, a positive light, on all the great things they’re doing.”

The final winners for the Good Works team, comprised of two 10-member teams with 5-student athletes from Division I and Division II schools will be announced in February. The winning teams will find themselves with a trip to the NCAA Final Four, but for Catchings it’s not just about the rewards, it’s all about giving-back and highlighting the positive.

"So many times we get so focused on the negative things that happen with athletes, that this was an opportunity to focus on the young women (and men) that are doing such great things off the court."

It's a mindset that was instilled in her by her parents.

“My father played in the NBA. So my mom and dad did a really good job of planting a seed of giving back and that there were a lot of people who were less fortunate than us. So at Thanksgiving passing out turkeys, handing out toys at Christmas—while we didn’t appreciate it when we were young, it was definitely a seed that was planted.”

"When sports got into the picture, it was like, if I can practice and I get really really good, if somebody made fun of me, I could say well let's go play basketball."

Finding purpose and confidence through sports is something Catchings carries through her life. But it turns out the hoops all-star wasn’t always as popular as she is today, or even the “most likely to succeed.”

“I was born with a hearing problem,” she recalls about her childhood. “I had to wear hearing aids, and I got made fun of a lot growing up. So, my support really came from my family. They made me normalize my life. And when sports got into the picture, it was like, if I can practice and I get really really good, if somebody made fun of me, I could say well let's go play basketball or let's go play tennis and that was my avenue of being able to kind of jump out of the bullying and stand out.”

But despite her own struggles, Catchings is always bringing it back to the work she’s doing with youth now through Allstate Good Works and Catch The Stars.

“My main thing is just giving back. I want to see these kids being able to reach their dreams one day. Showing these girls (and boys!), you’re doing such a great job while you’re in school and everything that you’re doing will carry over.”

When talking about women in sports nowadays, it’s difficult to not bring up the obvious talking point. Equality. Developing equal playing ground for women’s professional sports versus men’s is a topic that has been catching fire. After the U.S. Women's National Soccer Team won the World Cup this summer, there was an onslaught of news coverage about the pay gap between female players and their male soccer counterparts. The U.S. women took home $2 million dollars from FIFA for winning the cup. The German men's team took home the championship, and a whopping $35 million dollars.

For the first time in history we are seeing women like Becky Hammon, Assistant Coach of the San Antonio Spurs, take prominent positions with NBA. Yet there remains an obvious gap in exposure and pay for women's professional sports. I asked Catchings if she thought we’d ever see women and men play together in NBA, she responded with the type of trademark confidence that has highlighted her record-breaking career.

“I don’t know if thats really important anymore, to see that happen. That’s just me talking,” she laughs. "Where the NBA was when they were celebrating their 20th year—we are far beyond that that. We still have a long way to go, don’t get me wrong, but I feel like every year it’s really about continuing to get more coverage, continuing to build our game up, continuing to get new fans in the stands—and I think next year will be a critical year for year for us. We've got a lot of stuff coming up. I’m excited.”

The 20th year of the WNBA, next year, will also mark Catching’s last with the league. She’ll retire at the end of the 2015-2016 season. Leaving a big mark and big shoes to fill for the upcoming generation of women athletes who will join the league. When asked how to continue the forward momentum for women in sports, Catchings answered straight forwardly.

“I think thats the big thing there right there. Having more exposure.”

As for the next act for Tamika Catchings? She wants to continue to lead, but this time from the sidelines. “I want to be a general manager. Whether it’s in the NBA or the WNBA, I think that’s my next step.” She continues, "I’ve always been intrigued with building teams. Going back to the All State Good Works team, being able to build that team, being able to look and read about some of these inspiring young ladies and what they're doing, I love that.”

While Catchings' career will soon be in the past, her record and her impact on our youth will continue long after she hangs up her jersey.