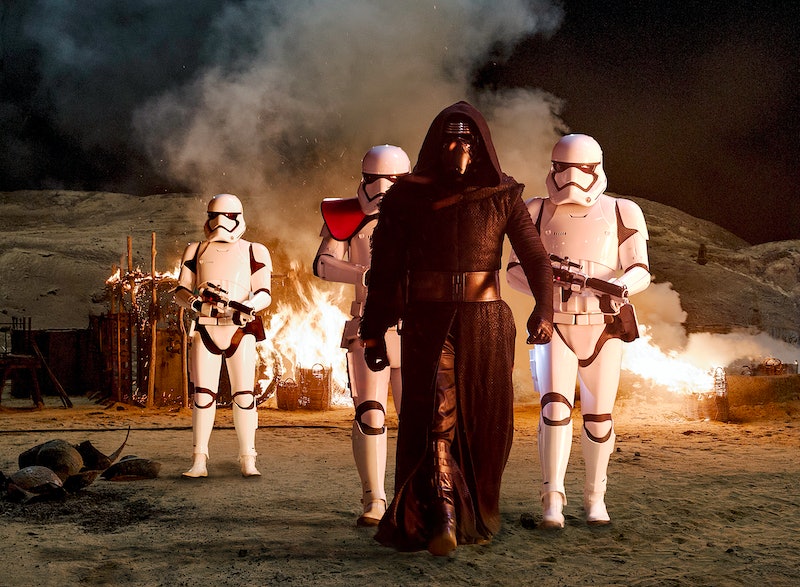 The release of The Force Awakens is right around the corner and fans are sitting at the edge of their sit with a lightsaber in hand, ready to rush the theater on Dec. 18 to be at one with "the Force" (or Dec. 17 if you were one of the lucky ones to snag an early screening ticket). Hell, I'm one of those crazy people who will be seeing it multiple times in the first three days of release. Yet what strikes me as fascinating is that people, myself included, are eagerly anticipating a movie that they barely know anything about. Director J.J. Abrams has been withholding tons of information about the movie's story, which has prompted fans to come up with some crazy Force Awakens theories — and these ideas have been running rampant on the Internet.

Perhaps it is a good thing that Abrams has been a little stingy about revealing all the details about The Force Awakens. In a world that's all about spoilers and instant gratification, it might be worth it to take a lesson on patience and let certain details remain a mystery. It all goes hand in hand with Abrams's "mystery box" theory. In 2007, Abrams gave a TED talk about a "mystery box" he received as a child. To this day, he has never opened it — and he is happy about it. The talk spoke to the fact that some things are best left to mystery, a practice the filmmaker has displayed in work like Lost and in Felicity (remember Megan's mystery box?). With Star Wars, he does the same thing — the only difference is that it won't be a mystery forever. Audiences will get to open the box on Dec. 18 and it could go either one of two ways: the waiting will pay off fantastically, or everyone will be tragically disappointed (remember The Phantom Menace?). I trust Abrams, though, and you should too.

But until then, here are some theories that have popped up on the Internet about The Force Awakens. From the possible to the insane, some of the ones that might be in Abrams' Star Wars mystery box.

1. Luke Skywalker Is The Villain

This is the number one rumor that has been floating around the Internet. Since Mark Hamill has been absent from the marketing materials, press tours, and trailers, it is clear that Luke has a crucial role in the movie. Fans are guessing that Luke has turned to the Dark Side. To make things even crazier, they think that he is Kylo Ren. I, for one, think Luke is too good to go bad. Then again, he is his father's son.

If Luke followed the paths of his mentors Obi-Wan and Yoda, then he might have just gone off the grid and done away with interacting with people. Or he may have pulled a Sixth Sense and is mentoring Jedis from beyond the grave just like Obi-Wan. I wouldn't be surprised if the latter were true.

The Star Wars franchise definitely likes keeping things in the family so it just makes sense that Rey would be related to someone from the original trilogy. It is highly likely that she is the daughter of Han and Leia, because I would be surprised if the two of them didn't have a child between Return of the Jedi and The Force Awakens. Why she is estranged is a mystery to me, though.

In the trailers, it's seen that Han runs into Rey and Finn and is helping them in some capacity. As the previous movies have shown, Han doesn't help people unless there is something in it for him or there is a strong emotional attachment. If Rey is his long lost daughter, then that would explain his attachment to her, but what about Finn? There have been theories that he is Lando's son and Lando was Han's BFF. See the connection?

7. Kylo Ren And Rey Are Brother And Sister

There was never a sibling rivalry between Luke and Leia, so maybe this theory would fill that void. If the previous theory about Rey is true, Kylo Ren would also be Han and Leia's son. This is turning out to be one twisted family affair. In any case, it would be great to see these two go head to head.

8. Kylo Ren Is Seducing Someone To The Dark Side

Well, duh. Aren't all baddies trying to get people to join the Dark Side? It's like a cult. If anyone, he's trying to get his maybe-sister to step into the bad side.

So many people have been busy trying to figure out who Finn, Rey, and Kylo Ren are that they have totally ignored Poe. Many people say that he is a Jedi, while others are saying he is the new Han Solo. I'm going with the latter.

Now this is a stretch, but people think it's possible. In the trailer, you can see Kylo Ren worshipping the mangled Vader mask, so maybe he has some Dark Side tricks to bring biggest baddie of them all back to life. I'm not counting on it, though.

I admit, this is a theory of my own. But what if Kylo Ren is just a red herring? What if Abrams was using him as a distraction from the real villain of the movie, who is in plain sight? I don't know, but sometimes that BB-8 droid looks very suspect.

Harrison Ford has talked about how he kind of wanted Han Solo to get killed in The Return of the Jedi, but luckily he survived. He just might get killed in The Force Awakens, though. Rumors have been circulating that he gets killed by Kylo Ren or — get this — Luke Skywalker. Why? I don't know. But people are saying the scene in the trailer where Rey is crying is because of his death.

13. Jar Jar Binks Is The Sith Lord Behind It All

This is probably the craziest theory of them all... but the more you read Reddit user Lumpawarroo's theory, the more it seems insanely possible. Apparently, Jar Jar was a puppet master from the very beginning in The Phantom Menace doing veiled evil deeds for Supreme Leader Snoke, a bigger baddie in The Force Awakens. If the theory is true, he is essentially the Keyser Söze of the Star Wars universe.

These theories are just the tip of the iceberg. Come Dec. 18, audiences will find out of any of them are true (I'm really hoping the Jar Jar one is true just so I can see how fans will implode on themselves).