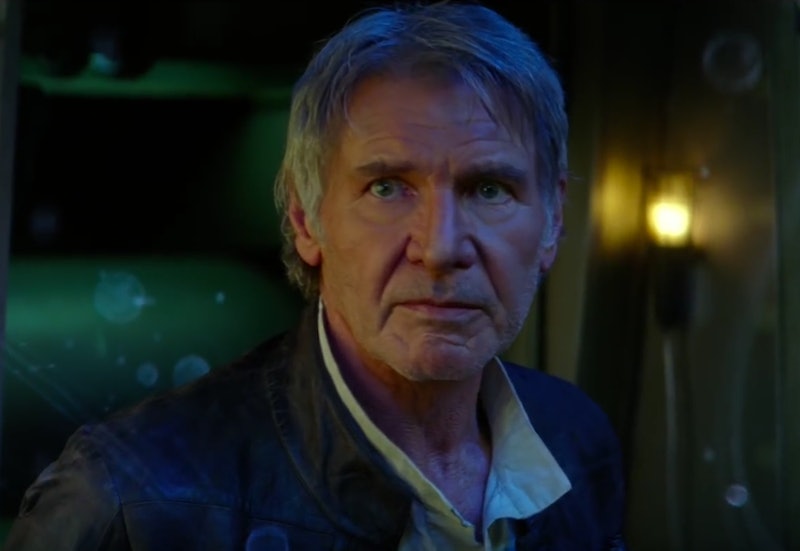 Star Wars: The Force Awakens might have the burden of pleasing the most demanding fans in pop culture history. So, it's not surprising that the newest Star Wars installment — the first since 2005's Star Wars: Revenge of the Sith — is getting a lot of pressure to include a reference to every fan's favorite moment or character from the original series. From Princess Leia's buns to a parade of Ewoks, there is no detail too small to escape the critical eyes of Star Wars fans. And, in addition to bringing back the three original heroes — Leia, Han Solo and Luke Skywalker — here are seven Star Wars references The Force Awakens must include.

The movie's director, J.J. Abrams, has assured diehard fans of George Lucas' original series that the new film will be full of references to the original trilogy. That said, he forced himself to limit the number of Star Wars references kept in the film for fear that it would become too much of a gimmick, or feel disingenuous. "That, to me, has been the constant struggle: to make sure that none of these things are treated like either they're a museum piece and we're trying to honor them or they're gratuitous and thrown in because, well, it's a Star Wars movie so you've got to put these things in. Everything has got to be essential to the characters in the film," Abrams told Vanity Fair . We'll only know which references make the cut when the movie comes out on Dec. 18. In the meantime, here are seven classic Star Wars moments I hope are revisited in The Force Awakens.

OK, full disclosure: I always thought Han was a bit of a jerk in this scene. Then again, I suppose that was always part of his charm. My personal feelings aside, this classic exchange between Star Wars' original royal couple absolutely needs to be included in The Force Awakens.

Who could forget when Han, Luke and Chewbacca infiltrated an Imperial prison to break out Leia and were forced to escape via the garbage chute? It's a classic escape plan, that, of course, goes wrong, but it feels like it should be some sort of rite of passage for the new Star Wars heroes, Finn and Rey.

It might have been emotionally scarring for fans to watch Han Solo get frozen in carbonite in The Empire Strikes Back, but even the most horrified viewers have to admit that freezing prisoners in carbonite is a pretty genius move. Evil genius, sure, but genius nonetheless. It would be interesting to see if putting your enemies in carbonite is still a practice used by the baddies of the galaxy far far away, like The Force Awakens' The First Order and Kylo Ren.

This simple special effects is somewhat of a space travel classic, and it's guaranteed to appear in The Force Awakens. Fans actually caught a glimpse of Hyperspace in the new movie's trailer, albeit with a few technological updates.

5. "These Aren't The Droids You Are Looking For"

Sure, this might be the most over-quoted line from the entire Star Wars franchise, but it would be nice if Abrams included it in The Force Awakens, if only so even a casual Star Wars viewer could feel in on the joke.

This isn't so much a reference as a fact of Star Wars life. C-3PO's constant freaking out is a staple of every Star Wars film, and there's no reason it should stop now.

We don't know much about The Force Awakens, but based on the trailer it looks like both Rey and Finn are looking for a family when they encounter Han Solo. Sounds like the perfect scenario for Han to throw in a sarcastic, "I'm not your father" quip. (I'm guessing the odds of any kind of "I am your father" reference being in The Force Awakens aren't good, but a girl can dream.)

Only a few weeks left until we all know for sure what kind of tributes the new movie pays to the classic series.

More like this
Every Horror Movie Reference In The 'PLL: Original Sin' Premiere
By Alyssa Lapid
Everything To Know About 'The Hunger Games' Prequel Movie
By Grace Wehniainen and Radhika Menon
Jennifer Coolidge Just Said The Most Controversial Thing About Legally Blonde’s “Bend & Snap”
By Maxine Harrison
A New Princess Diana Documentary Tells Her Story Like Never Been Told Before
By Frances Stewart
Get Even More From Bustle — Sign Up For The Newsletter