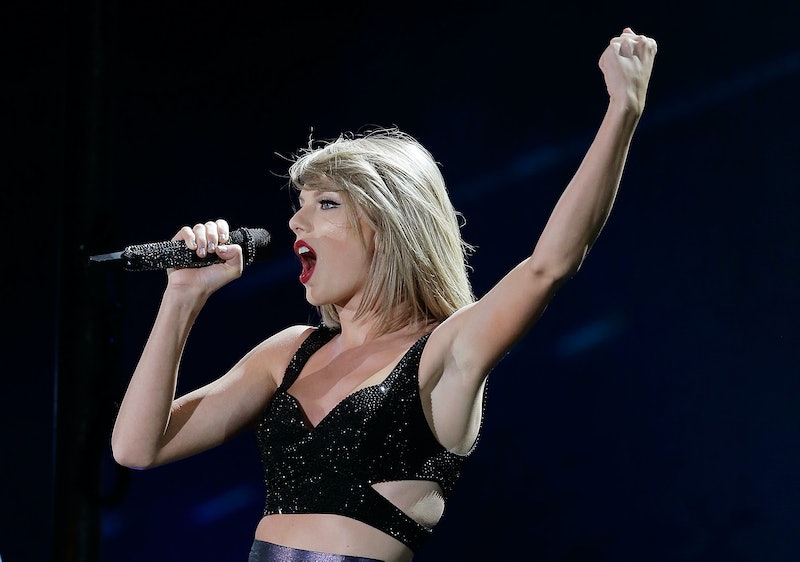 2015 has been the year of Taylor Swift's global domination. She is the reigning pop princess of the world, and we've all quietly accepted this, because, over the years, she's given us so many high-quality jams that why would we fight it? 1989 is an amazing album. It was lauded by critics and beloved by fans. She took on (and won) a fight with Apple Music and brought the entire U.S. Women's Soccer Team onstage during a concert. She had half of the modeling world in her "Bad Blood" music video. Swift has proved this year that she can accomplish anything she sets her mind on. And now it's time of the Grammy nominations, and Swift is poised to be nominated in every major category. And, honestly, Swift shouldn't sweep the Grammys this year.

There are at least five nominations (Album of the Year, Record of the Year, Song of the Year, Best Pop Vocal Album, and Best Pop Solo Album) that Swift is eligible for. Sam Smith won four out of those five awards last year, so it's not unheard of for one artist to sweep the Grammys. But, here's the thing: Taylor Swift shouldn't be one of them. I'm not diminishing the obvious greatness of 1989. I mean, it's barely a year old, and Ryan Adams already did a complete cover of it — it's clearly a triumph. However, this was a great year for music, and there was much more happening than just what Swift contributed.

There were groundbreaking albums, like Kendrick Lamar's To Pimp A Butterfly, which featured songs so powerful that they were chanted by entire crowds during the recent protests in Chicago. There was Bruno Mars and Mark Ronson's track "Uptown Funk," which became the longest running number one single on Billboard's Hot 100. Ed Sheeran's heartfelt ballad "Thinking Out Loud," is also eligible, and so is "FourFiveSeconds," the anthemic song by Rihanna, Kanye West and Paul McCartney. There's the work of Sam Hunt, Chris Stapleton, Meghan Trainor, Florence + The Machine, Fetty Wap and The Weeknd. It was a fantastic year for music, and Swift's album was only one part of it.

Taylor Swift was a big part of American (and global) culture this year. She's a great artist and a savvy pop star. She definitely deserves the nominations that she will undoubtedly receive. 1989 is a strong contender for Album of the Year, and it will probably win. But there are other artists whose work warrants a nod at the awards this year. Swift has been sharing the stage with a bevy of stars all year long; let's hope she's willing to do it one more time.