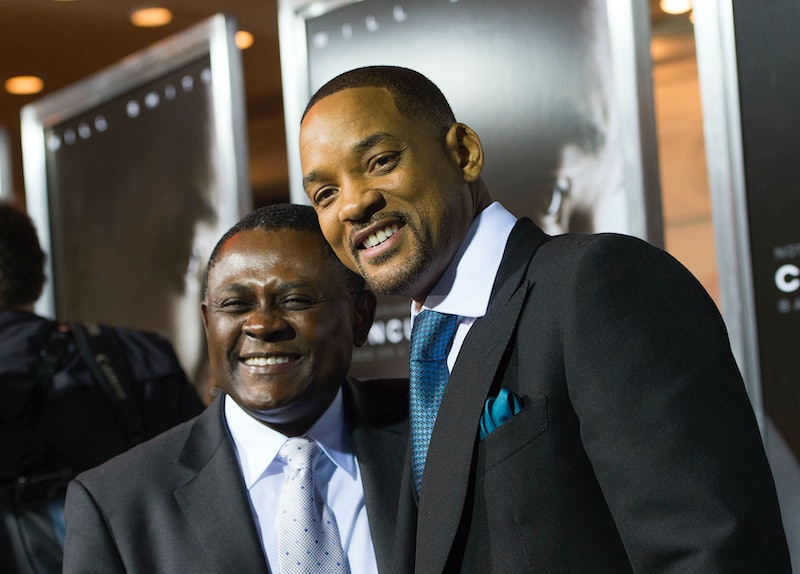 Will Smith once again demonstrates his versatility as an actor in the new drama Concussion, in which he portrays real-life neuropathologist Bennet Omalu. The Nigerian doctor made headlines after revealing the inherent risk of brain damage in NFL players due to the preponderance of head injuries in their sport. Concussion chronicles Omalu's discovery of the unsavory correlation, as well as the controversy that ensued when the NFL refused to take responsibility for players' medical issues. Since the doctor made his case by relying on pure scientific fact, one has to wonder how he feels about his story getting the Hollywood treatment. So, what does Bennet Omalu think about Concussion?

Although he acknowledges that Concussion is a dramatization of his story as opposed to a documentary, Omalu says that supports the film and has praised it wholeheartedly. The doctor described Concussion to The Hollywood Reporter as "unbelievable," and added that he was humbled by it. He also said that he believes that the film industry is a powerful influencer for change, and he views Concussion as a constitutionally American story about the search for truth. Omalu was also impressed with Will Smith's work, saying to THR that the actor did a "fantastic job" in his role. The respect is mutual, though; Will Smith told ABC that Omalu is a "beautiful man," and described how he spent time shadowing the doctor in his work as preparation for the role. However, Smith has also mentioned that he had been reluctant to take the role in the first place.

At the film's premiere, Smith revealed to BT that he was initially hesitant to accept the role of Bennet Omalu because he himself is a "football dad"; his oldest son played the sport for four years in high school. But Smith changed his mind after hearing from Omalu himself about the scientific evidence supporting the existence of a link between football and Chronic Traumatic Encephalopathy (CTE) as a result of repeated blows to the head during gameplay. Smith explained, “I didn’t know the potential results of repetitive head trauma and I felt as a parent I was uninformed so I wanted to create this for people to make informed decisions." He accepted the role.

Since promotion for Concussion has started, Omalu's work has once again come into the foreground of public awareness. He has taken advantage of this opportunity to not only spread knowledge of his findings but to generate a call to action. In a piece for the New York Times, Omalu proposed the implementation of a minimum age requirement of 18 for participation in football. The doctor believes that since the sport has an inherent risk, playing should be the individual decision of a consenting adult; not a decision that a parent makes for their child.

Is Omalu's argument compelling enough to spur sizeable change in a football-loving country? Audiences will find out when the film hits theaters Dec. 25.

More like this
Lewis Hamilton Turned Down A Role In 'Top Gun: Maverick' For This Surprising Reason
By Darshita Goyal
Harper Teasing David Beckham’s Dad Dancing Is Beyond Adorable
By Frances Stewart
The Spice Girls & Adele Lead Girl Power Celebrations For Lionesses’ Euros Win
By Sophie McEvoy
The 12 Best US Open Tennis Outfits Of All Time
By Avery Matera and Dominique Norman
Get Even More From Bustle — Sign Up For The Newsletter