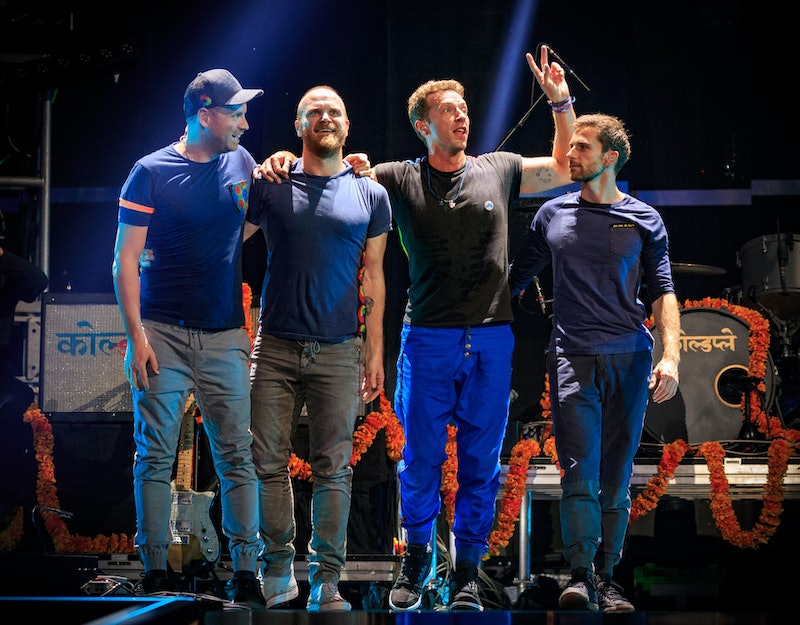 Sit down right now. Yes, right now. I have news. Huge, life altering news: According to US Weekly, Coldplay will be the 2016 Super Bowl Halftime headliner! Look at them! Viva-ing their la vidas! Or something like that. The iconic British band — composed of Chris Martin, Guy Berryman, Jonny Buckland, and Will Champion — will perform for the Super Bowl's 50th anniversary, so this is like, kind of a big deal. (If you hadn't gathered that already.)

It's also pretty much perfect timing for an announcement like this, because the band's seventh album, A Head Full of Dreams, comes out this Friday, December 4. They will already be on the tip of everyone's tongues/speakers of everyone's earphones, and this recent buzz will only add to that. Kudos to you, Coldplay!

Apparently, Bruno Mars (who performed at the sporting event in 2013) will also be somehow involved, reports US Weekly, as well as "friends of the group." (Which makes me think that Gwyneth Paltrow could be there, but I might be wrong?) As in such, we can conclude that Maroon 5 and Taylor Swift — who were rumored to be possible performers — will not be part of the show. But after Beyonce's recent collaboration with Coldplay for the song "Hymn for the Weekend," maybe we can deduce that Queen Bey will make an impromptu appearance?