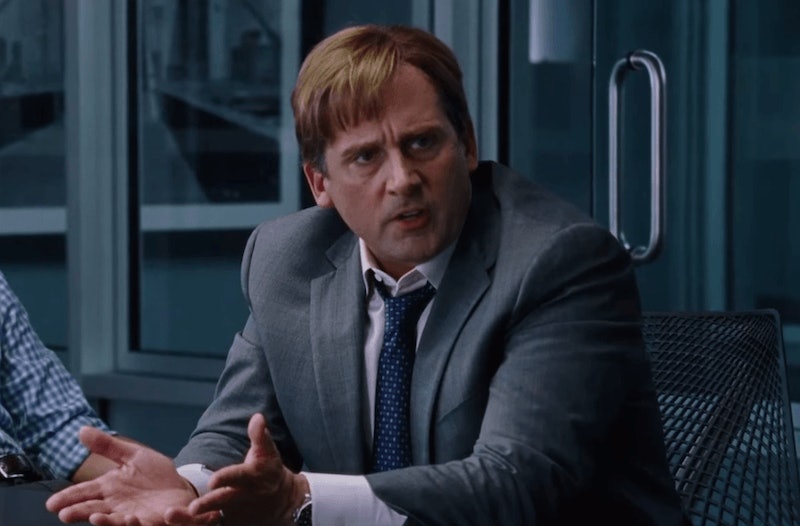 In The Big Short, Steve Carell plays the outspoken Mark Baum, one of four main characters based on real-life men who worked in finance during the late-2000s financial crisis. It's a time that everyone will hate to relive, but in the hands of Anchorman director Adam McKay, the situation turns into a whip-smart comedy that's hard not to enjoy. The film is based on the book of the same name by Michael Lewis, about four outsiders in the financial sector who predicted the mortgage crisis long before it happened. Many are dying to know what the real-life players think of the movie — specifically, what the real Mark Baum thinks of The Big Short and his role in the film.

Well, if you try to look up Baum, you won't find him, because he doesn't exist. In fact, Steve Eisman is the name you should be looking for, because he is the guy whom Baum is based on. Eisman hasn't said too much about the movie, but he was a major player in Lewis' book. To boot, Eisman was on set to give his two cents to Carell regarding his portrayal of the character, according to an interview Carell gave to Vulture.

Mark Baum isn't the only character in the movie whose name was changed from their real-life counterpart. Ryan Gosling's character, Jared Vannett, is based on Greg Lippman, a Deutsche Bank trader. Brad Pitt's character, Ben Rickert, is based on Ben Hockett, a partner at Cornwall Capital partners. In fact, the only main character in the movie bearing their real-life name is Christian Bale's Michael Burry, a hedge fund manager.But changed name or not, the role of Mark is a doozy, thanks in large part to Carell. The actor isn't a stranger to playing real figures in award season movies. Last year, he received his first Oscar nomination for his work as the quiet yet unsettling John du Pont in Foxcatcher. Baum is very different from du Pont, but Carell knows that playing characters based on real people requires extra care. “It’s a strange thing to talk to someone who you are going to portray,” Carell told the New York Daily News recently. “Because it’s creepy. You don’t want them to think that you’re just exploiting them.”

In the film, Mark Baum is fearless and unapologetic, if not exactly someone to root for, considering his role in the meltdown. While on set, Eisman gave Carell and the other actors advice; Carell told the Daily News that Eisman posted up next to McKay, and was giving notes to the director and the actors for certain scenes. One sequence in particular follows the group to a convention in Vegas, during which Baum finds out how corrupt the CDO market is.

"I was playing this one part a little brooding, and he said, 'Oh, I’d be much happier at this point than you are,'" Carell told Vulture. "He was like, 'At this point, I was joyful because we had these guys on the ropes, and this was just going to be fun for me.' Which I thought was interesting. Again, what I am doing, what anybody is doing, is an approximation. But it was important to me to gain a sense of how he fit into that world, and what his motives were as he did what he did."

In the interview, Carell talks about Eisman's motives, and how some people think he and the other three men weren't heroes — that they were trying to get rich off of the financial collapse. "I think he sees himself as a defender of justice and righteousness, while at the same time being conflicted. As I think they all were, about benefiting from the downfall of an economy. I really think he saw himself as a soldier on the good guys’ side. He’s very opinionated about bank fraud, and what they were up to, and I think he was and is very angry — you know, he’s an angry guy. Because he saw so much fraud around him."

Carell continued to say that "the more he [Eisman] learned, the more incomprehensible it was to him. And that he felt very alone in that regard. I think he felt like he was one of very few people who saw what was bad about the industry, and I think that helped define him." Regardless of the truth, there's no question that The Big Short succeeds in making the complexities of Eisman's story, and those of the other men, resonate on the big screen.

More like this
What’s New On Netflix: Ana De Armas’ 'Blonde' & A Nick Kroll Special
By Arya Roshanian
These 25 International Horror Movies On Netflix Prove Fear Is A Universal Language
By Bustle Editors
12 ’90s Movie References You Missed In 'Do Revenge'
By Radhika Menon
Twitter Has So Many Thoughts About ‘Don’t Worry Darling’ After Its Release
By Stephanie Topacio Long
Get Even More From Bustle — Sign Up For The Newsletter