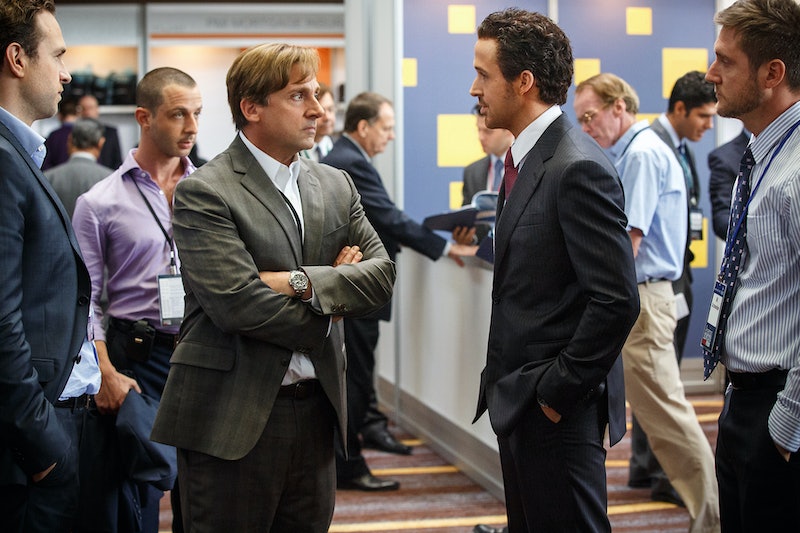 Director Adam McKay is responsible for giving audiences some of the funniest movies in the past 10 years. Without him, we wouldn't be incessantly quoting any of the Anchorman movies, or have witnessed the comedic prowess of Will Ferrell in movies like Step Brothers and The Other Guys. McKay is also one of the geniuses behind Funny Or Die, and he even helped craft the joke-filled screenplay for Ant-Man. Needless to say, he has brought a lot of funny into our lives, so when I heard he was doing a movie that sounded pretty serious, I was pretty surprised. Still, one only has to hear the true story behind The Big Short to realize why McKay was drawn to the new film.

Starring the Oscar-bait cast of Christian Bale, Steve Carell, Ryan Gosling and Brad Pitt, The Big Short brings audiences back to the days of the financial crisis that happened between 2007 and 2011— specifically, when a group of real-life finance workers realized that a mortgage crisis and the collapse of the economy was imminent. The story is based on nonfiction book of the same name written by Michael Lewis, who also wrote Moneyball and The Blind Side. Based on his track record, it's clear he knows his stuff when it comes to giving the facts the big-screen treatment, when it comes to movies based on his books.

And, of course, the most important thing about telling true stories are the players leading audiences through the facts. The Big Short follows Bale, Carell, Gosling and Pitt's characters as they get neck deep into the greedy and shady world of modern banking. The story may follow the true events, but several of the characters in the film have different names than their real-life counterparts. Here are the core four players, and the real-life people they're based on.

Burry is an American hedge fund manager and was one of the first to realize that the economy was going to implode based on the mortgage crisis. Lewis profiled him in the book, and his real name is one of the only ones used in the movie.

The character of Mark Baum is based on the outspoken hedge fund manager Steve Eisman, who was also profiled in Lewis's book. He was known for short-selling subprime home mortgages, and being hugely successful.

Jared Vannett is based on Greg Lippman, a Deutshe Bank trader. According to Bloomberg, he "offset losses on mortgage investments with wagers against subprime debt that made $1.5 billion." Got that?

Mr. Pitt dons a beard and glasses as Ben Rickert, a character based on Ben Hockett, a partner at Cornwall Capital partners who profited from predicting the housing market collapse.

Adam McKay is probably the only person who could make a movie about the biggest mortgage and financial crisis in history remotely entertaining. If anything, it's way more interesting than sitting through a finance class, right?

More like this
'Inside Man' Was Inspired By 'Sherlock' In The Most Unexpected Way
By Catharina Cheung and Maxine Harrison
'The Distant Echo' Provides All The Clues To Solve 'Karen Pirie’s Case
By Catharina Cheung
These 25 International Horror Movies On Netflix Prove Fear Is A Universal Language
By Bustle Editors
The Most Anticipated Books Of October 2022
By K.W. Colyard
Get Even More From Bustle — Sign Up For The Newsletter