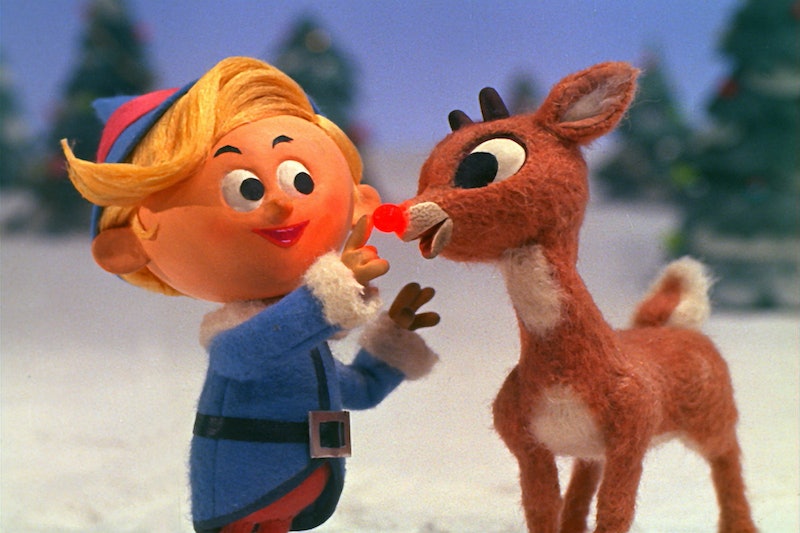 Quick question! Who doesn't love the claymation classic Rudolph The Red-Nosed Reindeer ? Besides maybe the Grinch, pre-heart transformation, or anyone who has a strange phobia of claymation, the color red, or reindeer in general...OK, I'm losing my point. You’d be hard pressed to find an authentic Christmas movie-lover that doesn’t have Rudolph The Red-Nosed Reindeer in their top five holiday film favorites. Maybe that’s because the 1964 stop-motion classic was full of so much joy and so much Christmas merriment that it’s hard not to become obsessed with it in some capacity.

I'm sure you're aware of the Rudolph legend: A reindeer is born into the world with a very specific genetic mutation (a red nose that glows), gets left out of reindeer games, and ultimately saves Christmas. But the claymation film is so much more than that. There's Hermey, the aspiring elf dentist, Yukon Cornelius, the prospector, an Abominable Snowman, and a whole island of misfit toys!

The best part about Rudolph The Red-Nosed Reindeer is that it never gets old. Seriously. You can — and probably have — watched the movie on repeat each time the Christmas season roles around. That’s why you’ll totally relate to these 15 things only people obsessed with Rudolph The Red-Nose Reindeer understand.

1. You Know Claymation Movies Are The Highest Form of Art

2. Johnny Marks Is A Musical King

Marks wrote the entire (glorious) soundtrack to the film.

3. Sam is the Only Anthropomorphized Snowman You Care For

4. You Wish Sam Could Narrate Your Whole Life

His voice. So soothing. So wise.

5. You Refer to The North Pole As Christmas Town

Because that's what Sam called it, and Sam knows everything.

6. Somehow "Santa" Sounds Cuter When Said By A Reindeer With A Cap On His Nose

7. The Whistling Sound of Rudolph's Nose Makes You Happy

Is it a flute? A horn? Or just simply music to your ears?

8. Rudolph Reacting To Being Told He's Cute Is The Actual Cutest

9. You Understand Hermey's Struggle, Every Monday At Work

10. You Also Definitely Wish Your Dentist Was Hermey The Elf

I mean your dentist sounds great, but Dr. Hermey? With his tiny elf stature, he could really get to those back teeth.

11. You Know The Abominable Snowman (aka Bumble) Is Sorely Misunderstood

He's not a bad guy, really.

12. You Look Up To Yukon Cornelius' Bravery (And Mustache)

The name's Yukon Cornelius! The greatest prospector in the North!

13. You Would Totally Own All of The Misfit Toys

Charlie in a box? A swimming bird? A cowboy that rides an ostrich? Those sound like great toys to me.

14. In Fact, You Secretly Wish You Could Visit The Island

Forget beaches! The Island of Misfit Toys sounds like a solid vacation destination.

15. You Feel Validated When Rudolph Finally Saves The Day

You knew he had it in him this whole time.

One thing's for certain. Rudolph The Red-Nosed Reindeer will go down in history... as the best Christmas film ever.