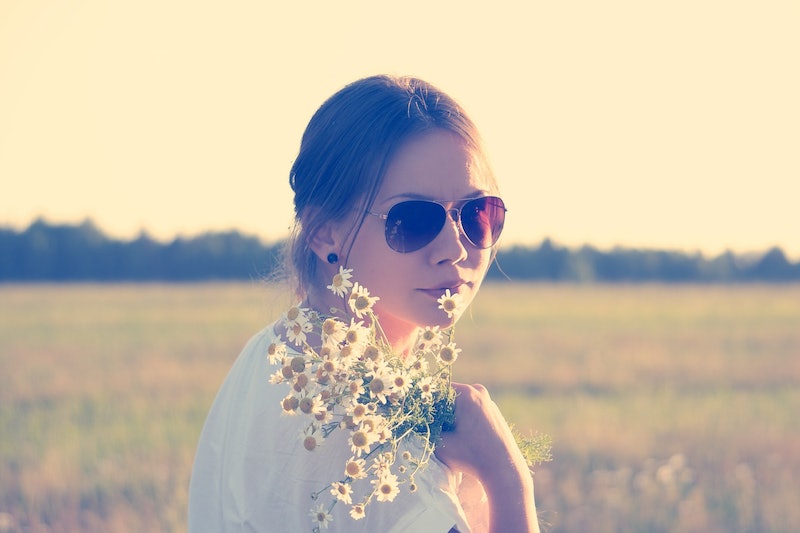 It's no secret that, despite the many gains we've made over the past century, sexism is still a major problem in our society. On average, women earn 77 cents for every dollar a man makes, our reproductive rights are consistently under siege, and according to the Rape, Abuse & Incest National Network, one out of every six women will be sexually assaulted during her lifetime. Of course, I recognize that I am infinitely more fortunate than many women in the world — I benefit from the work of countless feminist trailblazers who dedicated their lives to ensuring that women have the right to vote, attend college, and pursue countless amazing opportunities. Plus, I was raised by a woman who instilled in me the importance of independence, and taught me to prioritize my education and to never simply follow a guy's lead. (Shout-out to my mom, who is definitely reading this.) There's no denying that women have made a lot of progress in this country, and that's something to be grateful for. But it doesn't mean our work is done, by any stretch of the imagination.

Like every woman, I've dealt with countless instances of blatant sexism, which never ceases to infuriate me. But gender inequality is so deeply woven into society that most women regularly experience subtle sexism, too — and we don't always recognize it. And even when we do, we sometimes simply brush it off because we have bigger battles to fight, or because others pressure us to "not make a big deal out of it." However, confronting subtle sexism can be really important — because when we do so, we're asserting that we always deserve to be treated with respect no matter where we are or what we're doing.

Here are seven types of subtle sexism that you don't need to put up with:

The word "feminist" has so many negative connotations for so many people that lots of women are hesitant to use it to describe themselves — even if they wholeheartedly support equal rights. Feminists are often viewed as aggressive, bitter women who hate men, and despite the increasing social visibility of feminists and feminism, this inaccurate stereotype will just not go away. There's also a school of thought that says that feminism is no longer necessary — though a quick look at statistics about gender-related wage inequality should show that that is not true.

We still need feminism, and feminists deserve respect — so know that you don't have to put up with ignorant, disrespectful, and otherwise derogatory comments about your beliefs.

2. Unequal Expectations About Marriage And Children

When guys are single, it's assumed that they're living the dream, having fun, and enjoying their freedom. When a woman is single, she's often pitied and assumed to be feel incredibly lonely — and people want to rush to her rescue by setting her up with a nice guy. This is often done with the best of intentions — but as someone who decidedly prefers to remain single at this point in my life, it's gotten really tiresome to explain that I'm definitely not looking for a relationship and I'm not lonely.

At family and social gatherings, I've observed that women are questioned about their dating life far more often than men. Getting married is still viewed as a huge achievement for a woman — and there's silent (or not-so-silent) judgement when a woman is still single at a certain age. Again, this standard doesn't typically apply to men, which is why it's sexist. It sends the message that women can't live fulfilling, complete lives without a partner — and this is false. It also sends the message that men don't ever feel lonely or desire relationships, a myth that is a source of a lot of pain and confusion for people of all genders.

So know that people — especially people you don't know well — don't have the right to ask about your dating, marriage, or child-bearing plans, and you don't have to give anyone answers about why you're single.

3. Being Expected To Do Work Unrelated To Our Actual Jobs

Research has shown that women do more "office housework" in the workplace than their male counterparts; this means that administrative tasks such as fetching coffee, note-taking, and planning holiday parties often fall on female employees — even when they have seniority over certain male colleagues.

The common thread among these activities is that they are time-consuming and, since they are typically not tied to our actual job duties, they do absolutely nothing to advance our careers. Additionally, they take time out of our day — while we're on the phone booking a venue for the office holiday shindig, for example, we could be working on projects that actually look good on our resumes. And yet, we're expected to do them — and punished if we don't. According to an NYU study cited in The New York Times, when subjects were asked to rate employees based on whether or not they agreed to stay late and help at work, "a man was rated 14 percent more favorably than a woman [if they both agreed to stay late]. When both declined, a woman was rated 12 percent lower than a man."

And as Sheryl Sandberg and Adam Grant pointed out in a New York Times editorial on women and work, "the person taking diligent notes in the meeting almost never makes the killer point." I was the resident note-taker at my previous job, and I can definitely vouch for this — many opportunities are missed when you're expected to be seen rather than heard. So if you feel that you're being asked to take on duties that have nothing to do with your job, just because you're a woman, know that that is not OK — and know that you can speak up about it.

4. Being Interrupted While Talking

Extensive research has shown that women are interrupted more frequently than men, both in the workplace and during personal conversations. The studies have shown that men are, in general, more likely to interrupt others — but they are more likely to cut off a woman in conversation than another man. A 2015 study conducted by a George Washington University linguist tracking interruptions among conversational partners found that "[i]f a man’s conversational partner was female, he logged an average of 2.1 interruptions over the course of a three-minute dialogue; if his counterpart was male, however, that number dropped to 1.8. Women, too, were less likely to interrupt men than to cut off other women."

Since this behavior is so common and ingrained into so many of our social interactions, it reinforces the message that women don't deserve to be heard and our opinions are less important than those of our male colleagues and acquaintances. So the next time a guy completely steamrolls over a point you were trying to make, know that it's not just rude — it's also sexist, and you don't have to just politely shrug it off.

5. Being Mocked For Expressing Emotions

In August, the journal Law and Human Behavior published research that showed women are taken less seriously when they express anger during a group deliberation, while men who express anger gain respect for displaying this emotion. This is extremely concerning, because it means we potentially have less impact during jury trials and group decisions in the workplace.

And as Emily Nussbaum of The New Yorker observed in the above tweet, Bernie Sanders is often viewed as charming and passionate when he expresses his frustration about the current state of our country. However, if Hillary Clinton conducted herself in this manner, I'd venture a guess that she would be crucified by pundits — and her emotions would likely be chalked up to hormones. (Luckily, Clinton has no trouble maintaining a calm and collected demeanor, no matter what gets thrown at her.)

Women's emotions are frequently ridiculed — when we express strong feelings, we're often dismissed as being "hysterical" and "too upset to be taken seriously," no matter how we're expressing ourselves or what feelings we're expressing. And don't even get me started about how often a woman's mood is immediately attributed to PMS, any time we're not the personification of happiness on a particular day. So the next time someone tells you to "just calm down," think about whether they'd say the same to a man who was acting the same way you are.

Our vocabularies are filled with words and phrases that many of us use without thinking, but which are actually inherently misogynistic. Using the word "p*ssy" as slang for coward implies that women are weak and spineless (while in reality, as many people have repeatedly pointed out, the vagina is actually incredibly tough, strong, and physically resilient). Phrases like "man up" and "grow a pair" send the message that men are stronger and more resilient than women, and that we need to be more like men in order to get a tough job done or push through a rough patch.

When discussing high-powered or prestigious professions, it's common to hear the word "female" added to a job title, like "female CEO" or "female senator," while men are simply referred to by their job title.

And, I'll just state the obvious that there are no true male equivalents for words like "slut," "whore," and "prude" — because women are constantly expected to answer for their sexual choices, while men are generally not. So know that you're not being "uptight" if you object to these words.

Every single day, women are forced to deal with safety concerns that don't affect most men. Although the White House reports that women are less likely to be victims of violent crimes than men overall, women are more likely to be stalked and often feel vulnerable to violent crimes due to being alone — and since it's difficult to go a single day without reading a news story about a woman who became the victim of a violent crime in a public space, it's not hard to understand why.

Women live with a set of systems created to ensure our safety that many men could never imagine. When we're coming home late at night, we may ask cab drivers to kindly wait until we've unlocked our front doors before they drive away. When we're walking to our own cars late at night, many of us carry our keys in our hands like a weapon. After an evening out, women frequently text one another to ensure that everyone got home safely. These safety concerns and precautions are so deeply instilled in us that they have become habit. And, unfortunately, they're often necessary. Once, riding public transportation at 3 a.m., a man on the subway platform grabbed my chest and called me a slut. (No one in the vicinity said anything, nor did they appear remotely alarmed.)

I encourage all women to take reasonable precautions and always put their safety first — but I will always hate the fact that we live in a world where women are never as safe as men. Instead of having society take steps to ensure women's safety, we're instead told that it's our own responsibility, and if we do fall victim to a violent crime, that it is our own fault.

When we call out this kind of sexism, we're not being over-sensitive — we're saying that there's no such thing as an "acceptable" level of sexism.