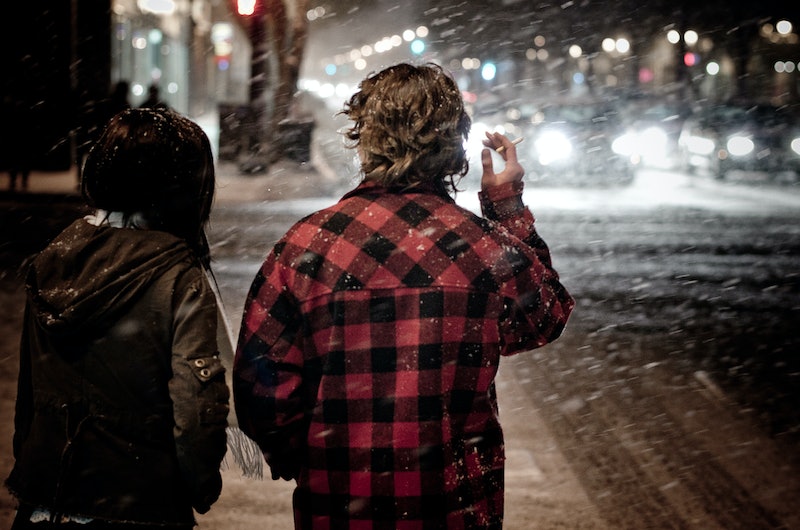 Anyone who has been simultaneously feminist and single knows that the struggle is real: It's hard to spot sexists when you're dating. Online dating has made this task a bit easier — OKCupid questions like, "Do you think women have the obligation to keep their legs shaved?" are designed to weed out misogynists — but sometimes, even if your profile screams out "I AM AN INTERSECTIONAL QUEER FEMINIST WHO ABHORS THE GENDER BINARY," you may still find yourself on a date with someone whose actions don't reflect this philosophy. (Not to mention that your inbox will likely fill with messages from people who have no clue what those words mean but somehow don't even care.)

While this problem disproportionately affects women who date men, since more women than men are feminists, it's definitely applicable to people of all genders and sexual orientations. Either way, though, since most sexists aren't going around with signs on their foreheads reading "Warning: misogyny ahead" or shouting "women should not have rights!" on their dates, identifying them may require attunement to a few subtle cues. If you notice any of these signs on a date, I would advise you to reconsider your next date with the person exhibiting them.

1. They Act Surprised When You Defy Stereotypes

A guy I was dating once asked me how I pictured my wedding when I was little. When I told him I had given literally no thought to tablecloths, centerpieces, or bridesmaid dresses, he responded, "Really? I thought girls dreamed about that stuff." It became clear to me that he had a different idea of what being a girl meant than I did. In another conversation, he confided that he had problems in his last relationship because he had a higher sex drive than his partner, and when I told him I'd been in his position as well, he repeatedly asked me if I misspoke and meant that I'd been in her position. His inability to see past stereotypes was creating a communication barrier between us. Assumptions of any sort prevent people from getting to know who you actually are.

2. They Praise Women Or Insult Men Based On Stereotypes

It may seem nice for a guy to say that he respects women because of their moral superiority, but as the Dalai Lama's recent comments demonstrated, benevolent sexism (the kind behind claims like “the female biologically [has] more potential to show affection") can be linked to less benevolent statements. And if a man believes that men, on the other hand, are aggressive or unable to control their sexual urges, there's a good chance he considers himself in that category and views that behavior as excusable.

3. They Compliment You By Contrasting You With Other Women

Compliments like, "You're not like most girls" or "You're not the typical girl" aren't really compliments. There's a slight chance that it could just mean you're a character and they've never met anyone like you, but if they view being unlike most girls as a compliment, they probably don't have a high opinion of most girls.

4. They Act Entitled To Women

I once met a guy on OKCupid who went on a rant on our second date about how women on the site weren't responding to his messages. This was "unjust," he said. I was particularly shocked because I, too, get frustrated by a lack of responses to my OKCupid messages, but I had never even thought to turn that frustration back on the people who decided not to message me with their own free will. This sense of entitlement — whether to messages, dates, or sex — is often a sign of Nice Guy Syndrome, (usually) a man's belief that women owe him something in exchange for his supposed kindness. Someone who feels it is "unjust" for women to say "no" to them may not respect when you say "no" to something they want.

5. They Buy Into Pickup Artistry

Pickup artistry is the absolute worst. To begin with, pickup artists try to manipulate women into sleeping with or dating them at the expense of these women's self-esteem and well-being. Secondly, they usually subscribe to stereotypes that men are sexually predatory and women are prey to be caught. Thirdly, they are not trying to form genuine connections; they're usually just trying to feel better about themselves by adding notches to their bedposts. Pickup lines are not your friend — unless, maybe, your date is joking about how ridiculous they are.

6. They Undercut Your Statements About Sexism With Rebuttals About How Hard Men Have It

Men do have it hard in some ways, but that doesn't undercut the fact that women are systematically viewed as inferior and the "other" in our society. There is room to talk about the challenges faced by each gender without making it a competition. Anyone who responds to your lived experiences of sexism without compassion lacks, well, compassion.

7. They Deny That Sexism Even Exists

A lot of people still love to debate proven facts, like that one in three to five women are sexually assaulted in college and that women who work full-time make 77 percent of what men make. Some people also like to deny that women undergo experiences like the ones Laci Green discusses in the video above. If someone denies that women experience sexism or views conversations about sexism as intellectual challenges that present the opportunity to play the devil's advocate, their ability to empathize (or, as the Dalai Lama would say, "potential to show affection") is probably not great.

8. They Complain About Political Correctness

Complaining about political correctness is putting your right to hurt someone's feelings above their feelings. Someone who sees political correctness as an affront to their freedom of speech is likely to care more about their ability to make rape jokes than your comfort and unlikely to listen when you're uncomfortable.

9. They Say Something Racist, Homophobic, Or Otherwise Bigoted

Breaking news: People who don't respect certain kinds of people also don't respect other kinds of people! Someone who is not interested in examining their privilege and figuring out how they can be more sensitive to perspectives other than their own is not likely to be a champion for women's rights.

I'm not just talking about someone who tries to sexually assault you (though that is also definitely a sign that you should run in the opposite direction!). There are also subtler signs, like touching your foot with theirs from across the table after you've already moved yours back to keep your distance, trying to kiss you when you've said you're not ready for that, or calling you a tease for not wanting to go as far as they do. People who do these kinds of things don't respect your boundaries and don't have a good understanding of consent, which could make them capable of something worse later on.

11. They Talk About Women's Looks

I once had a date complain to me that some of the girls he met online misrepresented themselves in their profile photos, even comparing one date's body to a vegetable. If someone talks about women they know or celebrities in a sexualized way, that's really another side of the same coin. It's not appropriate to comment on other people's looks (unless the conversation is on a relevant topic like, say, celebrity crushes), and feeling licensed to comment reflects a feeling of ownership over women's bodies.

It's widely known that women are more often interrupted — and that this can make women less likely to speak up in the first place. A considerate person will keep this in mind when talking to a woman and try to counteract it by asking questions and waiting until she is done to start talking. You should feel as if what you have to say is as important as what your date says.

If you want to know, on the other hand, if your date is a feminist, try bringing up current events that relate to women's issues (a distaste for Donald Trump is a good sign; a distaste for Planned Parenthood is not) or describing your own feminism and seeing how they react. Sometimes you've got to kiss a few sexist frogs before you find a feminist prince, but they're out there.

More like this
The Top Mistakes Scorpios Make In Relationships (& How To Avoid Them)
By Nina Kahn
Beyoncé & Madonna’s “Break My Soul” Remix Honors A Group Of Black Icons
By Stephanie Topacio Long
Hinge's New NFAQ Feature Is Demystifying Queer Dating
By Emma Carey
The Best Time To Date After A Breakup, According To Experts
By Bustle Editors
Get Even More From Bustle — Sign Up For The Newsletter