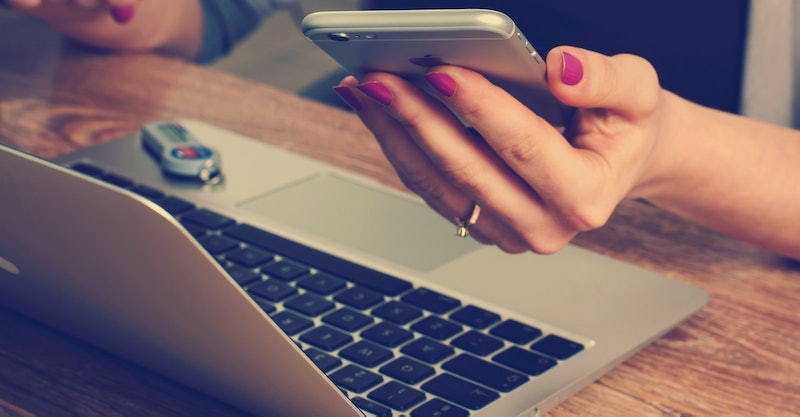 I am, for various reasons, not particularly open about the state of my mental health on social media, even though I write about it freely on Bustle. Reasons abound: I don't want to “be a bother”; I’m concerned about gaining a reputation as unreliable or erratic; my condition (severe depression) is slow and long and boring, rather than anything dramatic; I’ve been rejected harshly because of my illness before; and it feels curiously attention-seeking. I tend to sit on pain and only share it openly face-to-face, rather than blathering on anonymous screens. However, lately, things have been bad, and out of the blue I decided I’d open up. In a Facebook post. In front of everybody.

Largely, I wanted to be practical. People needed to know I wasn’t going to be functioning properly, which meant that social engagements and coffees might be difficult, and that even meeting in the street would be strained. I wanted to give context in case something serious, like a hospitalization, was necessary in the future. And I wanted to be assured that I could count on people.

The results were both heartening and strange. Social media is very rarely seen as complex: It's either stopping us from connecting properly, or the savior of modern communication in an international, time-poor landscape. Because I am a member of the original Facebook generation, it's the main way in which I keep in contact with distant friends, snatching moments on Chat or exchanging ridiculous comments on pictures. It is, in my human relationships, important, and it's stacked with genuine friends. Here's how they responded to my admission:

I Found That One Explanation Is Rarely Enough

I made my first post as explicit as possible about my emotions and what I wanted to happen, without talking about why. I kept things simple with a post that said: "Heads up: I am Not Doing Well. Perhaps publicly admitting it will make it easier. If you see me, give me a hug. It you can't, send good wishes."

The reaction was immediate, heartfelt, and positive. (It helped, I think, that it was accompanied by an eye-catching image by the artist Narelle Autio, a deliberate choice, as I wanted this to be visible.) However, I quickly noticed a pattern: The comments were full of simple expressions of solidarity and love, but several people supplemented their sympathy with an extra private message, asking what was happening. I was struck by this response: that the idea of sharing an emotion also implied that you should share why you were feeling this way. It made complete sense, and yet I just couldn't do it.

The reality is, of course, that talking about particularly nasty and difficult things can be extremely complicated and can, in some cases, make things worse. Other people are involved, for one, and for another, I already have a therapist.

I Became An "Event"

Social media is a unique kind of peer pressure. The comments building up on my Facebook post made me slightly uncomfortable because, after a certain point, I was sure they were coming in as people saw the momentum of the post build, not because their own feelings lent towards sympathy. They'd look like jerks if they didn't add a heart symbol to the pile, too.

This was a completely unintentional but kind of obvious side effect: I put a push for sympathy into the world, and that act exerted pressure on people to respond. I thought it would feel more sophisticated than the juvenile "OMG so sad I'm crying :-(" posts we all put up when we're 14, begging for somebody to ask us what's wrong. But even though I wasn't fishing for attention, it left me feeling guilty in the same way. Who was I to demand this from other people, and how could I guarantee that any of their sympathy was genuine? Social media earnestness is a real mindf*ck.

Here's the bit where I get grateful. Completely "together" people, with their their happiness evident, reached out to me privately and were like, "I have been there, what can I do?" That mattered. If anything, the messages and texts that came in after the Facebook post — the secondary events — were the real emotional event for me. Even though some of the comments made me feel insanely guilty in their tone of horror or concern, the real meat of their sympathy often made an impact, as did their choice to reveal hidden parts of themselves.

The guilt I felt was greatest among people who don't know me well, but reached out anyway, often with confusion ("I don't know what's going on, but..."). I felt invasive and greedy, and very exposed. I'd confused and scared people who barely knew me. This is the choice you make with suffering in general: Openness about issues creates concern and sometimes terror, and it can be as hard to live with as the suffering itself.

There Were Diminishing Returns

The first Facebook post I put up was specific in some ways, but very vague in others. After the feedback in which people asked for reasons, I held a second experiment: I put up a second Facebook post in which I recounted a particularly horrible thing that had happened that day, part of an ongoing situation that was definitely contributing to me not doing well.

The result? The second post got barely any attention on the surface (one comment), and only very close friends and family messaged me or texted me about it. I felt as if I'd discovered a nasty truth: You can reveal your struggles on social media, but after a certain point people feel helpless and confronted rather than able to reach out. And I was left with the feeling that being specific (giving a "reason") made people uncomfortably upset in a way that vagueness didn't. It seemed I'd gone too far. I deleted the second post.

I Became Hyper-Aware Of My Social Media "Mood"

The big question after being open about my depression on social media was: What do I do afterwards? I had opened myself up to scrutiny, and was left with an unusual dilemma. If I looked too "OK" too soon afterwards, people might not take me seriously. If I kept harping on about it, it would lose its impact. Essentially, I realized I was curating my own emotional appearance, and it had nothing to do with how I was actually feeling. It was a strange and unpleasant feeling.

I eventually settled for a few days of silence, then a short status update thanking people and giving them a picture of my cat. (She is very cute and features on my FB a lot.) But I'm left with the residual feeling that I need to continue to "perform" my depression, to "live up to" the admission I'd made, but not in a way that made people even more upset. (My third post seemed to reassure people; it got 19 likes. Though that's likely mostly because of the cat.)

So what did I discover? I won't be posting about my mental illness again, unless I am in very serious trouble. My Facebook post opened up a can of worms that I was, unsurprisingly, unable to fully anticipate or deal with; sympathy came with scrutiny, expectation, puzzlement, and distress in others, and that was yet another burden on top of what I was already experiencing. In my case, I found that social media openness about depression may be more trouble than a simple status update is worth.