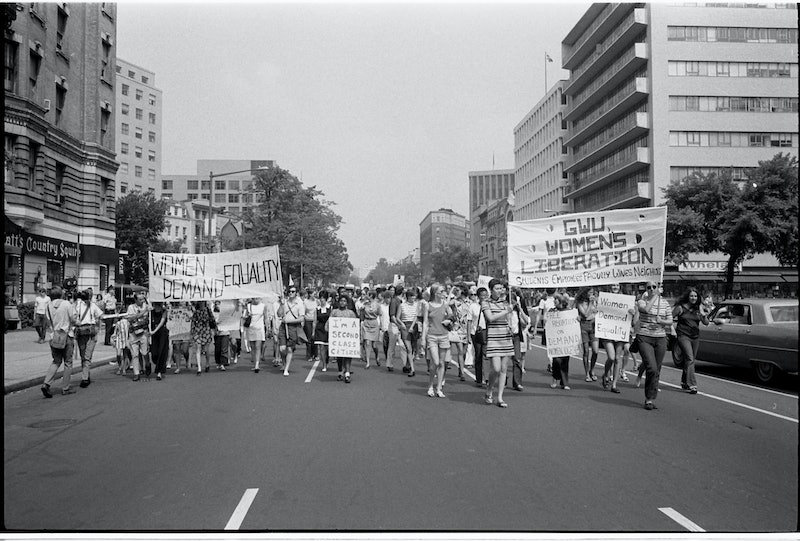 Who needs feminism when equal rights have clearly been a thing in this country since the beginning of time, amirite? Wait — I apologize — that is not right. I must have confused women with white men. When you look at all the things women couldn't do until recently and all the things we still can't do, it becomes very clear that feminism is, in fact, necessary.

Women's rights may be an old concept, with some ancient civilizations doing better than us on many fronts, but in recent United States history, gender equality is actually relatively new. Let's not forget that women couldn't vote 100 years ago, which means many Millennials' great grandmothers reached legal voting age without that right. In addition, married women could not be prescribed birth control until 1965, and that's just one more example of rights denied to women in recent history.

To delve into even more recent history, here are some things women couldn't do less than half a century ago in 1970. I repeat, 1970, when many Millennials' parents were growing up or entering adulthood. If you grew up with these rights and don't believe me, just ask your mom. She may not have had them.

1. Women Could Not Report Rape At The Hands Of Their Husbands

The first conviction of spousal rape in the United States took place in 1979, but marital exemptions were not eliminated from all states' rape laws until 1993. Even today, eight states currently have loopholes that often let marital rape slide by, so I'd say this battle is not over even today.

2. Women Could Not Report Workplace Discrimination On The Basis Of Pregnancy

Until the Pregnancy Discrimination Act of 1978 was passed as an amendment to the Civil Rights Act of 1964, pregnant women were not among the groups protected from workplace discrimination, which meant it was acceptable to fire a woman because she was pregnant in 1970.

3. Women Could Not Own Credit Cards Under Their Own Names

Just ask Hillary Clinton, whose bank denied her a credit card and told her to use her husband's. Before the Equal Credit Opportunity Act was passed in 1974, banks often denied women credit cards or asked for their husbands' signatures. Clinton's credit card denial actually came later, which is not too surprising, since (as we can see with spousal rape) laws can take a while to enact change in the societies under them.

4. Women Could Not Attend Military Academies

The first classes of women were admitted into military academies in 1976, even though women had been participating in non-combat roles since the Revolutionary War. Women weren't allowed in all combat roles, however — and yesterday, that rule finally changed, which is a big win for gender equality.

5. Women Could Not Get Abortions Throughout The Country

The famous case Roe v. Wade, which prohibited state bans on abortions, actually began in 1970, when a woman known as "Jane Roe" was prohibited from getting an abortion by Texas law. Dallas Country District Attorney Henry Wade appealed to the Supreme Court, which released its 7-2 decision in favor of Roe in 1973.

6. Women Could Not Serve On Juries In All States

That's right, folks. Until 1975, all you had to do to get out of jury duty in some states was be a woman. The Supreme Court declared that women could not be excluded from juries in the case Taylor v. Louisiana, which had an all-male jury. Louisiana, like Florida, only let women on juries if they declared their desire to serve in writing in advance. “It is no longer tenable to hold that women as a class may be excluded or given automatic exemptions based solely on sex if the consequence is that criminal jury venires [panels] are almost totally male," the decision declared at last.

More like this
25 Inspiring Quotes From Black Women To Celebrate Black History Month
By Kyli Rodriguez-Cayro and JR Thorpe
24 History-Making Black Women You Probably Didn't Learn About In School
By Ayana Lage and JR Thorpe
Twitter Is Identifying With Sally Field & Jane Fonda’s Friendship In New Viral Video
By Jake Viswanath
15 Black-Owned Liquor & Wine Brands To Add To Your Bar Cart
By Alexis Morillo
Get Even More From Bustle — Sign Up For The Newsletter
From hair trends to relationship advice, our daily newsletter has everything you need to sound like a person who’s on TikTok, even if you aren’t.