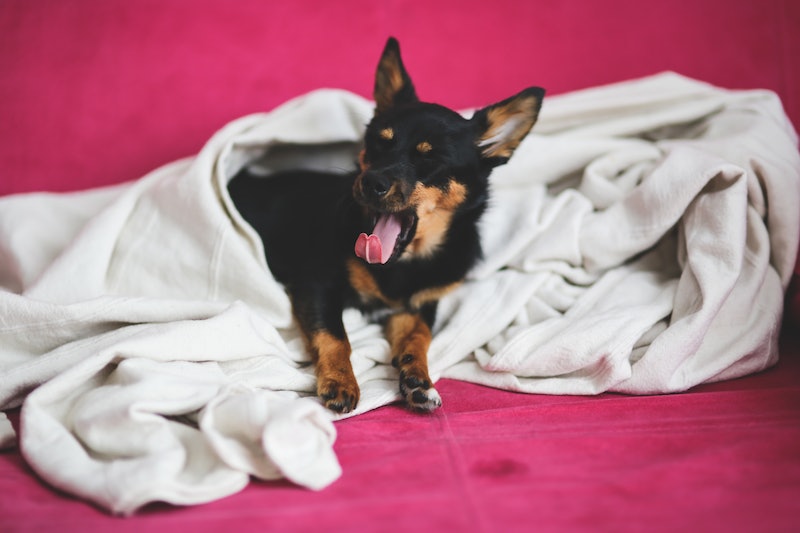 Whether you're a chronic insomniac or usually sleep like a baby, we've all experienced the excruciating feeling of not being able to sleep at some point in our lives. That's why Drew Ackerman created a podcast to help bore people to sleep. Because lying awake, unable to drift off is the worst.

Drew Ackerman started his "Sleep With Me" podcast in 2014, and today it routinely ranks among iTunes current top 50 podcasts. It's also often number one among health podcasts. Ackerman typically puts out three episodes a week, each one consisting of a long, winding story about something very mundane recounted in a drowsy, slightly slurred voice, as though the easily distracted narrator is also on the verge of falling asleep. Titles include things like "A Day At the Dickens Fair" or "Would You Ask A Goat A Rhetorical Question," and they are all full of unfinished sentences and unimportant tangents — the exact sort of boring story that makes you want to head for the hills during designated waking hours. You certainly wouldn't want to put up with it for over an hour, which is a common length for most episodes.

But of course, for falling asleep, they're perfect. They get your mind off of whatever else is bothering you, but don't provide anything else interesting enough to be worth staying awake for. Which is, of course, by design. Ackerman himself has suffered from insomnia and knows just how unpleasant it can be. “It was horrible,” Ackerman told Science of Us about his experience with worsening insomnia. “Even when I think about it now, it was a really isolating feeling. You start overthinking, your mind’s racing.”

But now, thanks to his podcast, hopefully fewer people have to deal with the problem. And if you're trying to drift off to dreamland, here are a few other weird tricks for getting a good night's rest.

According to science, lower temperatures might be the key to falling asleep. When you're falling a sleep, your body temperature drops slightly, which researchers speculate might be what helps you drift off. Lowering the temperature of the room helps speed that process along.

2. Listen to Audio Books You Don't Care About

There are thousands of audio books out there, and odds are you're going to find a lot of them boring. So pick a subject you aren't interested in — economics, linguistics, philosophy, something that many people find fascinating but to you sounds like watching paint dry — and find the driest, most, technical book you can on the subject on audio book. Or as an actual book — reading a print version works just fine, too, if you don't mind the lights being on. Just don't pull it up on a screen — science says looking at a screen just before bed disrupts your sleep rhythm.

If you want something soothing and peaceful, I recommend the site that lets you listen to Wikipedia. The site makes different chimes for everything that is changed on Wikipedia, providing a serene backdrop that never repeats. Plus, I find it very comforting to know that you're listening to knowledge being added to the world.

4. Try To Force Yourself To Stay Awake

Trying to make yourself fall asleep never works, as most of us are well aware of by the time it's two o'clock in the morning on a weeknight and we haven't been able to sleep a wink. But trying to force yourself to stay awake on the other hand? Don't try to distract yourself with something interesting, but just lie in bed trying to keep your eyes open, and often times, that'll be enough.

If you pick the right pieces, classical music can be a great tool for helping you drift off — just don't go with Beethoven's Fifth Symphony. Science recommends music that's 60 to 80 beats per minute.