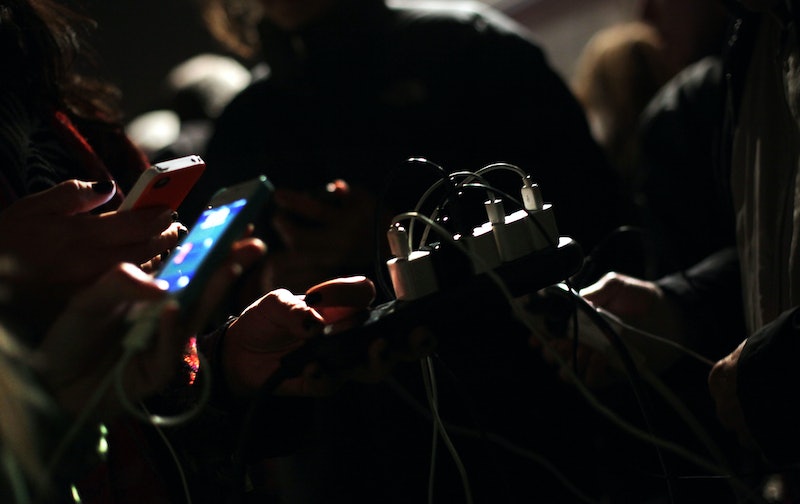 As crazy as the whole thing seems, it actually does make sense. The key is the blue glow your phone maintains while charging. According to scientists at the University of Granada in Spain, the light that phones, tablets, and other electronic devices messes with your body's production of melatonin, a hormone that helps regulate sleep. Although any ambient light can disrupt melatonin, science suggests that short-wavelength blue light — the kind that phones tend to give off — can actually be the most disruptive.

This in and of itself is not new information; science has been noting the ways our glowing screens mess with our brains for a while now. But the researchers in Spain took things a step further and looked at what other effects melatonin production might have. And based on their studies with rats, they found that melatonin, which not only regulates sleep but also metabolism, plays a significant role in weight gain. In fact, increased amount so the hormone can even help combat Type II diabetes in rats. And the researchers believe that the same sorts of effects would hold true for humans as well.

The whole thing seems like a but of a stretch — after all, rats are not the same thing as humans, and the rats in question weren't even exposed to cellphone-like light; they were just given different levels of hormone. Still, the basic logic behind these findings makes sense. Cell phone light when you're trying to sleep means less melatonin; melatonin helps regulate your metabolism and fight obesity; ergo leaving your cell phone charging all night, filling up your bedroom with blue light, might contribute to weight gain.

Though really, turning the screen off, putting your phone face-down, or covering it with something takes care of the problem pretty easily. So it's not like this is a super gigantic issue that no one will ever solve. Or better yet, just don't charge your phone in your bedroom, and you'll be fine.

So what do you say, science? Any other weird studies for us? Never mind, I'm sorry I asked.