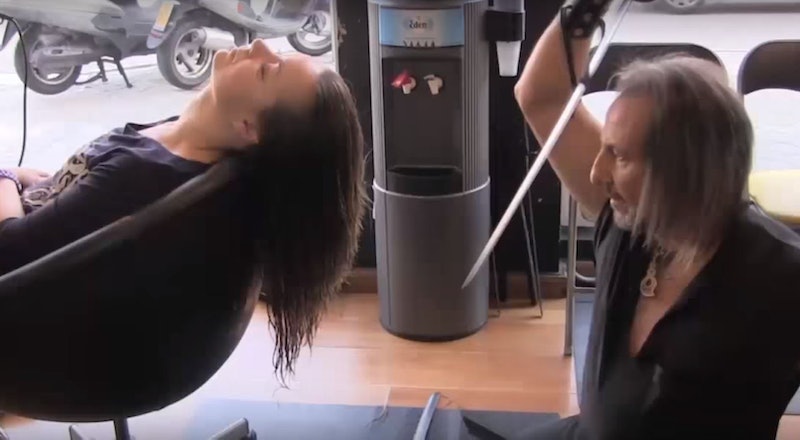 Just as with any career, hair stylists will eventually experience burnout if they stick to the same techniques. While most stylists seek out continuing education at this point, some go off the deep end and start cutting hair with swords and fire, Fashionista reports. Yes, you read that right. Video has surfaced of Madrid-based stylist Alberto Olmedo practicing his unusual techniques on what I hope are very well-compensated models.

Originally posted to AJ+ on Facebook, Olmedo's self-described medieval techniques have gained an audience of over 100 million views. In defense of his methods, Olmedo claims that the only way to get a "mathematically" symmetrical haircut is to cut both sides of the hair simultaneously, and so naturally rather than reach for another pair of shears, he went for samurai swords. And the blow torch? It prevents split ends and helps the hair to grow faster, he claims. Olmedo isn't the first to tout fire as the solution to split ends — remember the Brazilian candle trend a few years ago? — and he isn't the first to cut hair with samurai swords either, but he is the first to gain notoriety for combining both of these techniques and more into what is probably a very expensive haircut.

Watching Olmedo work is as suspenseful as the confrontation scene between Starling and Buffalo Bill in Silence of the Lambs. Here are the most tense moments in the video, ranked from simply unnerving to downright terrifying.

1. When He Describes His Technique

2. When He Pulls Out The Swords

While this is a man holding two four foot long, sharpened swords, at least he's not slinging them all over the place.

3. When He Pulls Out The Claws... The First Time

4. When He Wields Four Pairs of Shears

Unless you're seriously ambidextrous, there is no reason to use one (let alone two) pairs of shears in your non-dominant hand. But this is seriously impressive.

5. When He Sets A Woman On Fire

Is this how Gisele Bundchen gets her hair cut?

6. When He Goes Wild With Metal Clawed Hands

Talk about an extreme trip to the salon.

7. When You See He's Not The Only One Doing It

Oh my gosh, don't let this become the next Big Thing.

Want more beauty? Check out the video below, and be sure to subscribe to Bustle’s YouTube page for more hacks and tricks!

More like this
The Best Beauty Looks From The 2022 BET Awards
By Audrey Noble
Why Sarah Jessica Parker Wanted Fans To Stop Calling Her Hair Choice “Brave”
By Brad Witter
How To Protect Your Scalp From The Sun, According To Derms
By Paris Giles
15 Summer Hairstyle Trends That'll Inspire Your Next Chop
By Paris Giles
Get Even More From Bustle — Sign Up For The Newsletter