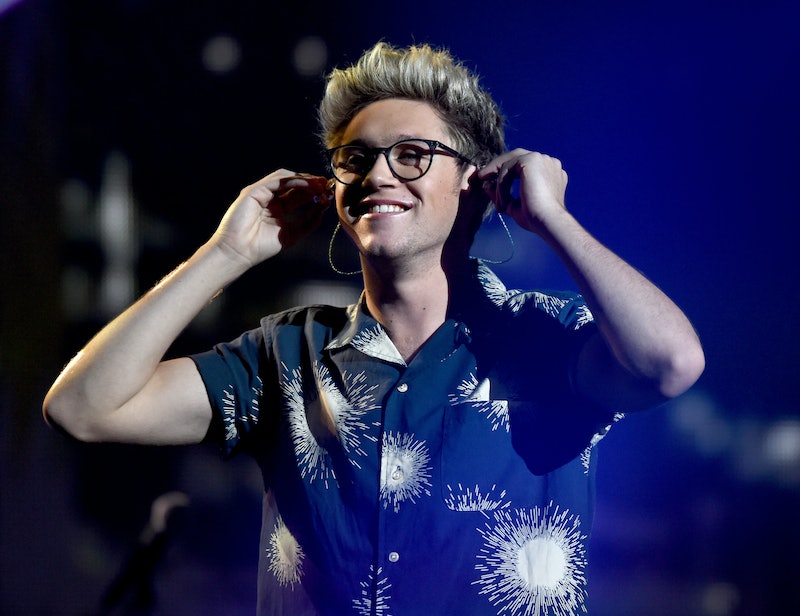 When James Corden convinced the guys of One Direction to play a terrifying game of tattoo roulette on Thursday night, it was Harry Styles who wound up getting tatted on TV. Of course, Styles (sporting a dimpled smile that could melt all the circles of hell) took it like a total champ, inking "late late" on his arm with the type of breezy nonchalance reserved for things like putting on your socks. Niall Horan, on the other hand, was pretty much quaking with fear about the thought of getting the tattoo instead. With the rest of his bandmates rocking ink all over their bodies, it should be noted that 1D's sole Irishman is entirely tattoo-free. Why doesn't Niall Horan have any tattoos?

Simply put: Dude is not one for the needle and the idea of getting a tattoo freaks him out. Plus, he just doesn't "feel the need" to get inked. And just in case you don't believe the 1D singer when he's said in the past that he's "just too scared to do it," you really have to look no further than his adorably frightened face throughout all of Corden's tattoo roulette game. He's basically the embodiment of the first verse of Eminem's "Lose Yourself" — you know, "palms are sweaty, knees weak, arms are heavy" and all of that. Corden himself even points out how much Horan is sweating and shaking. He literally covers his eyes like a kid before Styles opens his box to see if he'll be inked.

So, imagine his relief upon finding out that Styles was the one going under the needle. Horan practically threw a party with excitement, jumping up and down so feverishly that his shirt rode up and fans could see his boxers peeking out from the top of his jeans. (I realize this sounds super creepy, but it's in the video and you know fans took notice.) And considering the rest of the guys have enough ink for an entire boy band plus 10, it's not exactly necessary that Horan get inked anyway.

"Niall goes through stages," Louis Tomlinson once told Teen Vogue about his bandmate's stance on getting a tat. "Sometimes he's like, 'Aw yeah, I might get one!' Then sometimes he's like 'I don't know.' I would be surprised if he did it."

Since Styles and Tomlinson blatantly told Corden during the show that they regret some of their tattoos — with Tomlinson calling some of his "stupid" and Styles laughing about the time he got the word "big" done on his big toe — it's not hard to see why Horan would be so hesitant. Maybe he's just learning from his bandmates' own mistakes.

Plus, never forget the time that he got a temporary tattoo of Corden's face on his ass — a legit thing that happened once that Corden made sure to remind Horan about this time around. Obviously, that tattoo alone is worth more than any of Liam Payne's chevron stripes or Tomlinson's "oops!" tat or Styles' naked mermaid ink combined.