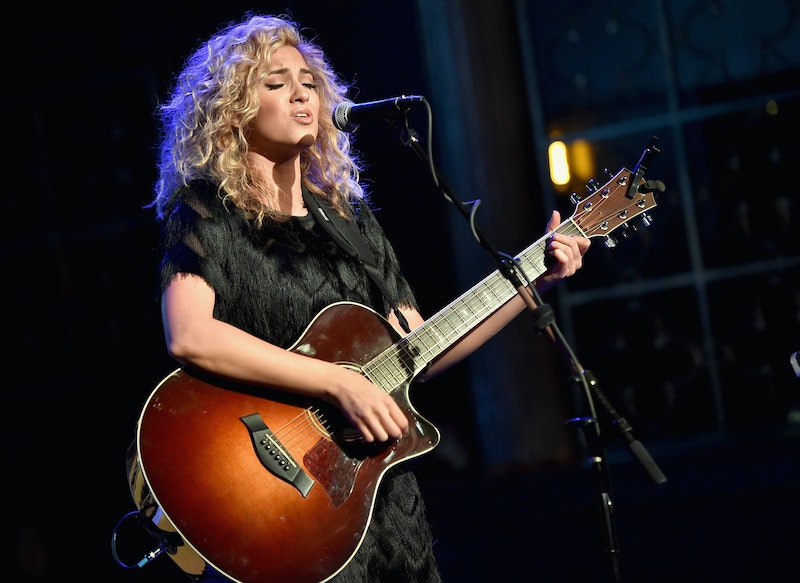 It's a big day for the music industry: The 2016 Grammy nominations were revealed on Monday morning — and some of the nominees caused our jaws to drop. It wouldn't be the Grammy Awards without a bunch of major snubs and surprises, now would it? I mean, just take a look at a few of the curveballs the Recording Academy threw us in 2014: Miley Cyrus' Bangerz was nominated for Best Pop Vocal Album, Meghan Trainor's "All About That Bass" squeaked into both the Record of the Year and Song of the Year races (and Beyoncé and Jay-Z's "Drunk In Love" somehow didn't?), and Idina Menzel's "Let It Go" was completely frozen out of the main categories (pun intended). Yes, the Grammy nominations are notoriously unpredictable — but that's what makes nomination morning so exciting!

There are definitely artists who have become "Grammy darlings" over the years, but generally speaking, I think predicting the Grammy nominations is pretty challenging. Of course, there were a couple of nods we saw coming: Taylor Swift, Ed Sheeran, and the Weeknd all snagged nominations in key categories, for example. However, there were a number of gasp-inducing shockers, too.

Below are the biggest 2016 Grammy nominations surprises:

Chris Stapleton's Traveller Nominated For Album Of The Year

Many Grammys prognosticators (myself included) were expecting the Foo Fighters' latest release, Sonic Highways, to be in the 2016 Album of the Year race; however, country singer Chris Stapleton's chart-topping LP, Traveller, made the cut instead. Traveller did recently win Album of the Year at the 2015 Country Music Association Awards, but country albums have had a tough time getting recognized in this category in the last few years, so this nomination is definitely a surprise.

I was not expecting Tori Kelly's name to pop up in the Best New Artist category this morning — but I'm so glad it did! The 22-year-old singer is extremely talented — and she's delivered a few wow-worthy award show performances this year — but she hasn't had much commercial success yet. Consequently, I was expecting her to be overlooked. Thankfully, Grammy voters took notice.

R&B singer D'Angelo's comeback album, Black Messiah, was met with universal praise when it premiered in December 2014, but the Record of the Year category tends to favor songs that were big hits, and "Really Love" was a moderate hit, at best. Clearly, Grammy voters care about recognizing quality music and not just mainstream pop songs.

Tori Kelly wasn't Monday morning's only surprise Best New Artist nominee: Australian singer-songwriter Courtney Barnett unexpectedly made the cut, too! The 28-year-old artist's debut album, Sometimes I Sit and Think, and Sometimes I Just Sit, was a major critical success, but she isn't a household name just yet. Hopefully, this honor will bring her more attention in 2016.

I just told you that Record of the Year tends to favor songs that were big hits. So, how did Wiz Khalifa and Charlie Puth's "See You Again," a song that topped by the Billboard Hot 100 chart for 12 non-consecutive weeks in 2015, miss out on a nomination? Your guess is as good as mine. Fortunately for Khalifa and newcomer Puth, "See You Again" did manage to snag a Song of the Year nod.

Kelly Clarkson has one of the best voices in the music industry today, but her latest album, Piece By Piece, is probably one of her weakest efforts to date. (It also failed to launch a top 10 hit.) Needless to say, I wasn't expecting the 33-year-old singer to get much love today, but she proved me wrong: Piece By Piece earned a surprise nomination for Best Pop Vocal Album. (The LP's lead single, "Heartbeat Song," also scooped up a nomination for Best Pop Solo Performance.) I guess Clarkson is one of those "Grammy darlings" I mentioned earlier!

Mark Ronson and Bruno Mars' mega-hit, "Uptown Funk," is a front-runner to win Record of the Year, but it was shut out of the Song of the Year race. Why? I can't say for certain, but I suspect it has something to do with track's legal issues. After a copyright claim at the beginning of the year, "Uptown Funk" gained five new co-writers, bringing its grand total to 11. I have a hunch Grammy voters wanted to steer clear of any controversy.