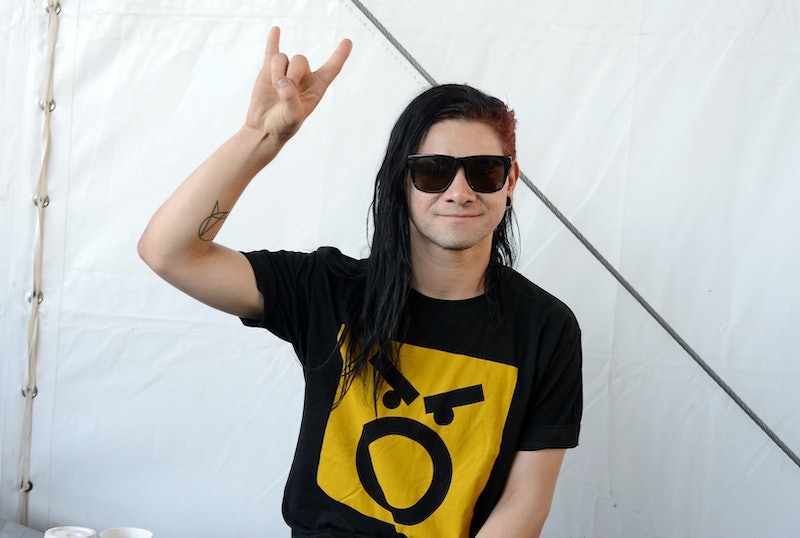 If anyone was still unsure about Skrillex's musical abilities, his hit collaboration with Diplo and Justin Bieber, Where Are Ü Now, convinced them. It came as no surprise when the song garnered the trio an American Music Award for collaboration of the year last month, but Skrillex was making bangers long before he started working with the Biebs. The punk rocker turned EDM superstar has been making music for more than a decade — and he's got the awards to prove it, six Grammys to be precise. And Skrillex deserves another Grammy Award at the 2016 ceremony.

At only 27, Skrillex is basically an EDM wunderkind. In addition to his array of Grammys, Skrillex has also won two MTV Video Music Awards and even won an Annie Award (a prize given for achievement in animated film) for his work on the Disney film Wreck-It-Ralph. Though you wouldn't know it, because he seems like a pretty humble guy, Skrillex has quickly become one the most awarded DJs around. Thus, that Skrillex (with Diplo and Bieber by his side) could be accepting his seventh or even eighth Grammy award come February. The trio was nominated for Best Dance Recording for "Where Are Ü Now," and Skrillex and Diplo were nominated for Best Electronic/Dance Album for their collaborative album Skrillex and Diplo Present Jack Ü.

Here's a few of the reasons that Skrillex should win at this year's Grammys.

A few years ago, it would've been hard to imagine Skrillex teaming up with Justin Bieber. He was a DJ with a punky vibe and Bieber's career was in flux after a series of bad behaviors. The collaboration is evidence of how much each of these artists has grown.

If you can believe it, "Where Are Ü Now" was originally written as a piano-heavy ballad. Skrillex and Diplo transformed it into the electronic hit that it became. He has a true sense of how to make music. It's a talent that deserves to be rewarded.

In this video with The New York Times , Skrillex talks about how the human voice is really just a synthesizer. Who thinks like that? It takes a real understanding of how sound works to make the kind of music that he makes.

Jack Ü is seriously an amazing dance album. Skrillex and Diplo are so great at what they do and it was a great idea for the two of them to collaborate on an album. They're both visionaries in their field.

5. He Made One Of The Best Songs Of The Year

Though it wasn't recognized by the Grammys as such, "Where Are Ü Now" was one of the biggest hits of the year. It's a song that will be looked back on as special to the year 2015. It was the song that prompted the world to accept Justin Bieber again. #NeverForget.

6. His Work Is Important

Skrillex has played a big part in legitimizing EDM. His work has brought EDM to the mainstream. His music has transcended genres and made its way up the charts. He's been on the cover of Rolling Stone.

Let's face it, Skrillex is an important artist, and he deserves to win another Grammy for it.