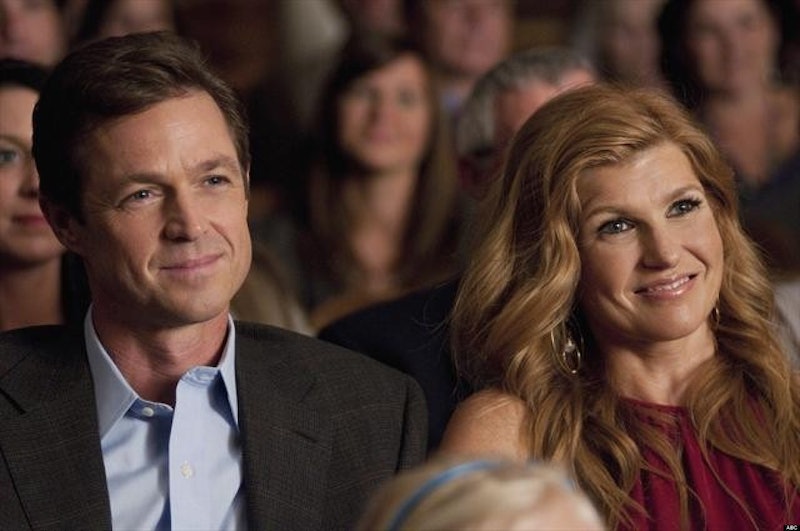 Presumably after reading my many complaints about the show’s slow pace and specific calls to “kill Peggy,” Nashville made quick work of the latter and at least humored me on the former with a winter finale in which, amazingly, stuff actually happened. Peggy’s dead (for real). Will was staring down an oncoming train, looking suicidal. Juliette professed her love for Avery, only to discover that he was still living with Scarlett. Usually Nashville would be careful to spread that kind of plotting over 8-10 episodes. So to see it in just a single 42 minute stretch was something of a wonderful holiday treat.

Now we’re back from break, and Nashville seems ready to barrel ahead with those and plenty of other new plots. Could this be the start of a true renaissance for a show that has never quite lived up to its promise? Probably still too soon to tell. Still, let’s see how everyone fared over the course of 2014’s first episode, “I’ll Keep Climbing,” and you be the judge.

Deacon is just being a little baby

Inspired by the pop-up show he played outside the Music City Music Festival he’d been so rudely ejected from, Deacon decides it’s time to start writing his own material — really making a go of his solo career. And that’s all well and good until he immediately struggles to find his muse. In the process he belittles his sweet girlfriend who just wanted to make him dinner and even goes so far as to park outside a liquor store. Thank God he doesn’t go in but Deacon — get it together.

It started with a phone call (“Kelly Clarkson wants to record our song!”) and ended with Scarlett walking out of their audition, saying she “thought I could make it work but… I can’t.” And why is that, do you think? Could it be because she still has feelings for Gunnar, and it absolutely breaks her heart to consider that he’s entered into a new relationship — one in which both parties just shared the L word — with that stuff still lingering? 100 percent.

Okay, so not all of the plots tonight were winners. Rayna continues her Charlie Brown descent into sad trombone territory, with seemingly nothing — personal, professional — going quite right for her. Maybe one day soon Rayna will receive an award, or find herself in a healthy relationship. But not yet. Not yet.

Scratch that — she doesn’t believe in a god… who would listen to crackpots (like the crackpot outside her Pittsburgh show baiting her with nasty comments about her dead mom)? On the heels of her scandal with that billionaire couple, the walls are coming crumbling down around Juliette. By episode’s end, former fans are burning her headshots on the news. So that’s not great.

Will’s in a real tough spot

He decided not to off himself, which is good, but the singer is still understandably distraught — by what might happen to his career were he to come out, and what kind of life he’s actually leading to stay in the closet. Gunnar tries to suggest that it’s the 21st century, and fans (and the industry) might be more tolerant than he assumes… but that’s not much help to a guy whose entire world is in the balance. If his end-of-episode interaction with Brent is any indication, Will seems to have decided on his career.

A good start! Next week promises a blacked-out Juliette and some tender moments between Rayna and Deacon, so January could really be our month.