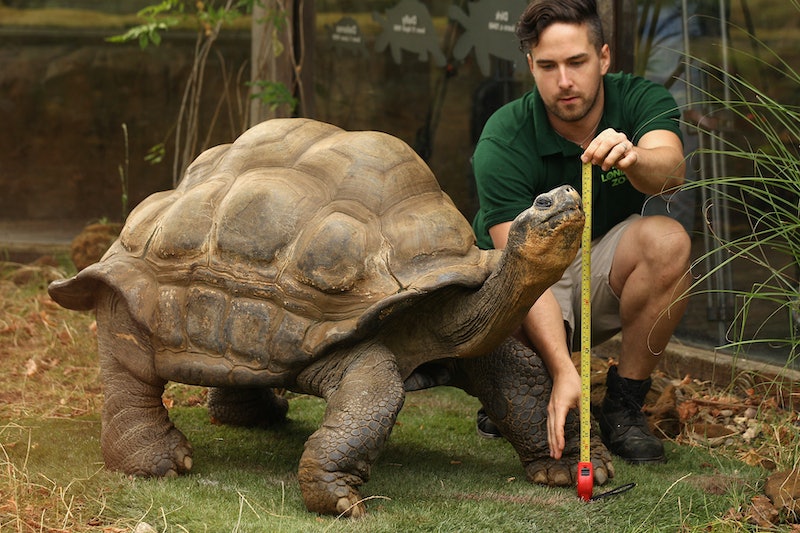 Once in our lives — once if we’re lucky — we experience a moment of clarity so intense, so overwhelming, that it sets the stage for all the learning and growth that comes afterwards. Some people are lucky enough to have that moment result from something spiritual and elegant that is not too gross to mention at dinner parties. For me, however, that moment was the time an adult male Russian tortoise snuck up and bit me on the ankle while I was having sex (sex with a person, not with a tortoise — don’t be weird).

I later realized that I learned nearly all of my most important dating lessons in the moments following that reptile attack, lessons that have helped me throughout the rest of my (blessedly tortoise-free) life. Lessons that I would like to now share with you, gentle reader, to help smooth your ride through your dating life — no sinister terrapins required.

1. Be Upfront About Your Big Issues

There were a lot of things I didn’t know about my partner as we set upon our business that fateful day. But the most important thing I didn’t know was that there was a fucking tortoise roaming the house. This ended up being a pretty good metaphor for the weird secrets we carry into new relationships. The small stuff, the complicated stuff — wait ‘til the time is right to talk about it. But the huge issues — the things that are going to affect the burgeoning relationship in the very near future, whether you cop to them or not — just admit them, so that your partner can decide what precautions to take. Let people know about the tortoise in the house, so to speak. Also, literally let people know if there is a tortoise walking around your house.

2. Be Upfront About Your Goals

While I did not know about the literal or metaphorical tortoises running around this guy’s house, I had my own secret: I really liked him. I thought that being honest about that would ruin our tentative relationship. Not true, of course — conflicting goals are what actually ruin relationships, not honesty. And no matter how much you delude yourself, you can’t actually make a relationship where one person wants something serious and the other wants something casual succeed by just not admitting to them. They’re going to bubble up, if not through words, then through actions — after the biting, I was embarrassed because I thought I had been humiliated in the middle of auditioning to be this dude’s girlfriend; he was just bemused, because some girl he was casually boning was making a huge deal about being very lightly bitten by a reptile.

3. A Humiliating Incident is a Great Way to Tell If Someone is Long-Term Relationship Material

Unsurprisingly, after this all went down, I looked to the dude for comfort and he just kind of chuckled. I should have realized then that we didn’t have any serious relationship potential. Being close to someone means constantly bearing witness to their embarrassing moments, from weird farty noises during sex, to accidentally referring to a restaurant hostess as “Mom.” A good partner is a rock in the storm of non-stop humiliation that is life — someone we can turn to for comfort when the world’s tortoise bites are getting us down.

4. Reptile Ownership is a Big Responsibility

Reptile ownership combines all the responsibilities of caring for a more traditional pet with the added requirement of sharing your home with a terrifying prehistoric monster. Gauge your own maturity carefully before making such a commitment.

5. “Friends With Benefits” Should Act Friendly

About that bemused, hands-off reaction to the bite: many people get so overwhelmed by the intricacies of non-dating dating, that they err on the side of caution by acting like they don’t care about their casual partner’s well-being. This is considered inoculation against the other partner getting “too serious” and “hurt” when they realize you don’t reciprocate those serious feelings — but it leads to your partner getting hurt anyway, the same way anyone gets hurt when people are inconsiderate to them. You’re not leading anyone on by acting in a generally thoughtful fashion — in fact, failure to act thoughtful in a sexual situation may lead to your ex angrily writing about it on the Internet several years later.

6. Close Your Bedroom Firmly When Performing Any and All Sex Acts

I know I covered this in #1, but it is really just good sense.

7. Pretending That Something Didn’t Happen Doesn’t Make It So

In the moments after the tortoise incident, as I struggled to make sense of what had just happened, I decided to just pretend that nothing had happened--because I was upset at the way my reaction and the dude’s reactions clashed, and didn’t want to admit it. It didn’t work then, because it never works—denial doesn’t make you immune to whatever feelings you are having, it just makes dealing with them feel taboo.

8. If You Have a Pet That Just Kind of Poops Wherever, Maybe Build Some Kind of Habitat or Special Space for It

You know. Maybe. Just a thought.

9. Whatever Your Horrible Humiliating Secret Is, It Is Totally Normal

All the humiliating personal secrets that we think make us absolute freaks — they’ve happened before, to more people than you could imagine. That sense of humiliation is a powerful tool of repression — it keeps us too embarrassed to learn the very real lessons hiding in all of our romantic humiliations, lessons that would vastly improve our lives in general. A lot of people have a lot invested in convincing us that the embarrassing shit that happens in our dating and sex lives makes us less than, and that we’re best served by just shoving it down the memory hole. Don’t buy it. Own your embarrassing stories, and learn from them. After that happens, you stop feeling embarrassed by them.

10. Try to Leave the Lights On

It'll give you a jump on whatever is coming at you (tortoises, underwear belonging to other women, that girl from The Ring) and thus make you more able to defend yourself, your heart, and your tender, tender ankles.

More like this
Are Quality Time & Gift-Receiving Love Languages Compatible?
By Lexi Inks
The 19 Best Tweets & Memes About Bisexual Awareness Week
By Lexi Inks
Breeding Kinks Have Been On The Rise Since Roe V. Wade Got Overturned
By Lexi Inks
6 Dating App Tips To Try If You're Looking For A Serious Relationship
By Lexi Inks
Get Even More From Bustle — Sign Up For The Newsletter