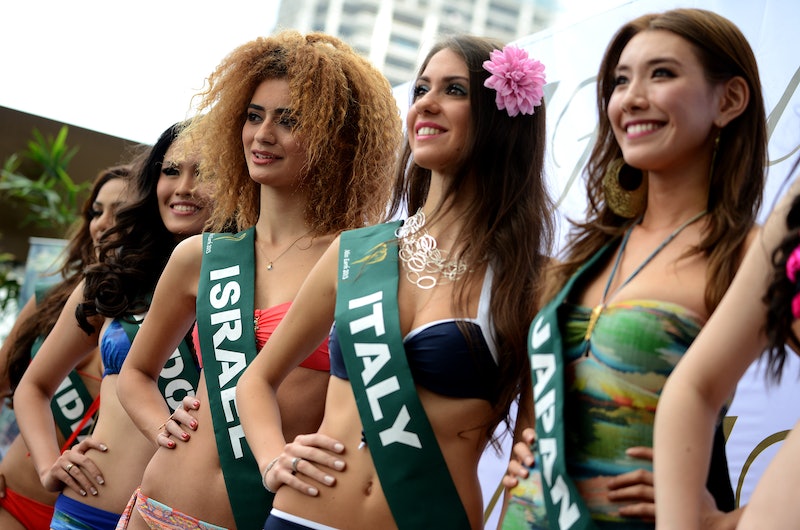 After Angelia Ong won the crown of Miss Earth this weekend, there were just two questions on everyone's minds: Firstly, what is the Miss Earth pageant? Secondly, and more importantly, how does Ong get her hair so ridiculously shiny? Inquiring minds would like to know. Tragically, I don't have an answer for the latter, but I'm here today to tell you all you've ever wanted to know about the Miss Earth pageant. In fact, it's probably way more information on the subject than you'll ever need to know, but who knows? It might come in handy if you're ever kidnapped by aliens who demand information regarding environmentally-friendly beauty pageants in exchange for your life. Stranger things have happened.

Before we begin, let's talk about the gorgeous, poised elephant in the room: The sexism inherent in beauty pageants. Some argue that beauty pageants are a relic of the past, when women were overtly prized solely for their appearances (rather than the modern day, where the objectification is a little more subtle). Pageants have roots stretching back to the 1920s, and admittedly, not much has changed since then. Although supporters point to the interview and talent portions as examples of pageants' search for a well-rounded woman, the fact remains that virtually every pageant places just as much emphasis on the contestants' outer beauty as they do inner beauty. Swimsuit competitions don't exactly show off contestants' intellect.

Considering how narrow such definitions of beauty are in the first place — contestants are virtually all thin, toned, and able-bodied — it's not hard to see why pageants are seen as a perpetuation of sexism and objectification. However, others claim that beauty pageants are a chance for women to assert their agency, especially in parts of the world where such agency is hard to come by. How you feel about the subject, of course, is up to you, but it's something to keep in mind.

That being said, debating pageants' sexism is unlikely to help when those alien captors demand to know Miss Earth's history before they return you to Earth. Let's take a look at how the pageant got to where it is today.

The Miss Earth Pageant, which calls itself an "International Environmental Event," began in 2001 with the mission of "channeling the beauty pageant entertainment industry as an effective tool to promote environmental awareness." (Keep in mind, kiddos, that this was before An Inconvenient Truth , so Miss Earth was looking out for the environment before Al Gore made it cool again. Kudos to them.) Now in its 15th year, between 80 and 90 Miss Earth contestants compete in different cities every year for a crown created by Florida-based designer Ramona Haar.

Miss Earth's tagline, "Beauties for a Cause," is no joke. According to the pageant's website, Miss Earth requires contestants to be knowledgeable about environmental matters, and winners are expected to advocate for and become involved with environmental protection through activities like tree plantings, eco-fashion shows, and coastal clean-ups.

Miss Earth has garnered international attention more often than you'd think. Miss Afghanistan, aka Vida Samadzai, made headlines all around the world in 2003 for wearing a bikini onstage in a move that was simultaneously denounced in her home country and celebrated by feminists worldwide. The pageant has also made waves in the past for featuring contestants from countries that typically frown upon beauty contests, such as Miss Pakistan (Naomi Zaman) and Miss Tibet (Tsering Chungtak).

This year's winner, the aforementioned Angelia Ong, made headlines in this year's contest, which took place in Vienna, Austria, for being the second winner in a row from the Philippines. She's also notable for being super freakin' adorable, an advocate for reforestation, and totally cool with marriage equality. If that's not the sign of someone totally worthy of the title Miss Earth, I don't know what is.

More like this
Scotland's First Period Dignity Officer Has Sparked Backlash
By Darshita Goyal
Beyoncé & Madonna’s “Break My Soul” Remix Honors A Group Of Black Icons
By Stephanie Topacio Long
Brad Pitt Is A Huge Fan Of This British TV Show
By El Hunt
It’s Official: 'The Bachelorette' Is No Longer A Fairy Tale
By Samantha Allen
Get Even More From Bustle — Sign Up For The Newsletter