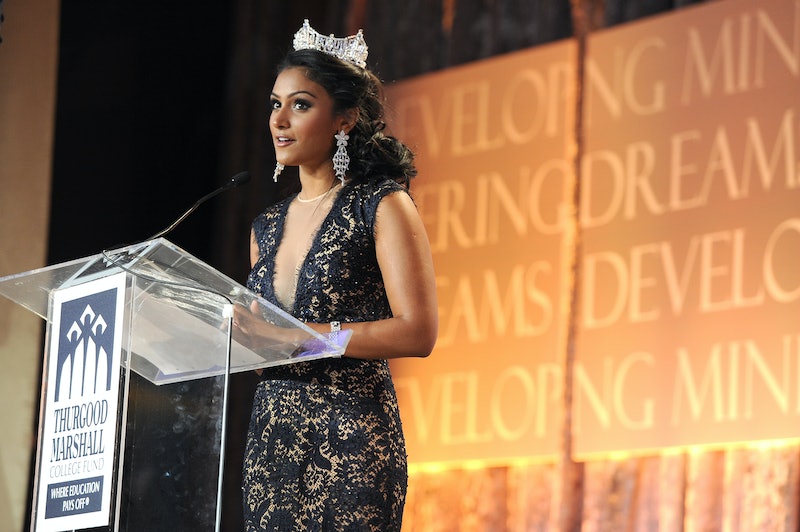 There she is, Miss Symbol of Conventional Gender Mores — ahem, I mean Miss America. The pageant has a long heritage in the U.S., with roots heralding back to the 1920s, but it has been mired in controversy for about just as long. It's not a new question, but the question itself remains: Are beauty pageants like Miss America inherently sexist? Well, it depends on where you are in the world.

First, some background. The Miss America pageant, though grounded in pedigree, gained enough ire to inspire a spin-off. The Miss USA pageant (which, in turn, is the event that selects America's entry into Miss Universe) was created only because, in 1951, Miss America winner Yolande Betbeze decided she didn't want to pose in a swimsuit for a publicity photo. Thus an off-shoot event was born when Catalina Swimwear saw an opportunity and pulled their sponsorship in favor of creating a new pageant. For Betbeze, her motivations were purely feminist. She entered to win the scholarship money then established, "I'm an opera singer, not a pin-up."

While it's exciting to delve into history of prominent feminists who have graced the pageant world (even Diane Sawyer has competed for and won a title), it's easy to see that the modern incarnation of beauty pageants is less about strength of character and public speaking skills, and more meat market. Even Miss USA, now owned by Donald Trump, which was inspired by refusing to conform to pageant conventions features the familiar saunter of the swimsuit competition.

It's clear to many progressives here in the states that beauty pageants might do more harm than good— love Honey Boo Boo though we might, child pageants are perhaps the creepiest manifestation of the whole industry. However, what about parts of the world where women have less agency over their day-to-day lives? An exceptional documentary on Netflix that you must add to your queue immediately, The World Before Her explores the story of two Indias: the hyper conservative Hindu extremists who indoctrinate young women with tradition and curb their dreams, and the beauty industry, which gives women one of their few outlets of financial independence.

The film presents with grim reality what pageants mean to women in a terrifying world where extremists have been known to drag women from bars and physically assault them on the street (trigger warning for explicit violence). In a world like that, being able to say "my body my choice" and strut on a national and sometimes international stage is liberating. It's a world of women, in an industry primarily by them and for them to consume. However, the documentary doesn't skimp on the icky parts. Just like in the states, the pressure for a certain kind of beauty prevails, and the openness of body modification can be a little shocking, like when a female pageant director takes the women on a field trip to get Botox.

Flash back to the United States, and you can see pageants still have sociocultural significance at home as well. Nina Davuluri's Miss America win last year was an exciting moment in pageant history, and a telling one for American race relations. We finally had a winner representing first and second generation Americans, and someone who didn't look like they were spit out of a plastic beauty queen factory. For every girl who grew up thinking her weird ethnic nose or skin tone wasn't beautiful or worthy, Davuluri's win said, "Yes, you are."

It's less that Miss America is sexist and more that it has a responsibility to bring itself into the modern age. Pageants are a powerful medium to reach a huge audience and also champion the success of excellent women in a world where "being pretty" means you get talked down to or thought of as promiscuous or stupid. I won't get into the "but what about real women?" thing, because all women are real women, and pageant queens are people, too. (Plus, that rhetoric totally eliminates trans women from the scene, which we need to stop doing.) What really rubs is more of an American concern over a gender one: We've come, as a nation, to value pretty, shallow things. We get the pageant we deserve, and in an era of Teen Mom sex tapes, I'm guessing pageants just care less about finding the next Diane Sawyer.

Of course, this is not to say the current Miss America is anything but accomplished: Davuluri is pursuing an MBA in international relations with her sweet, sweet prize money, which the pageant organization still awards to winners. I can only hope that this year, and in years following, the Miss America pageant continues expanding with the times, reevaluating gender, and holding its applicants to the highest skills standards in addition to looking pretty in a gown and showing the world that how you look on the outside doesn't determine who you are on the inside.