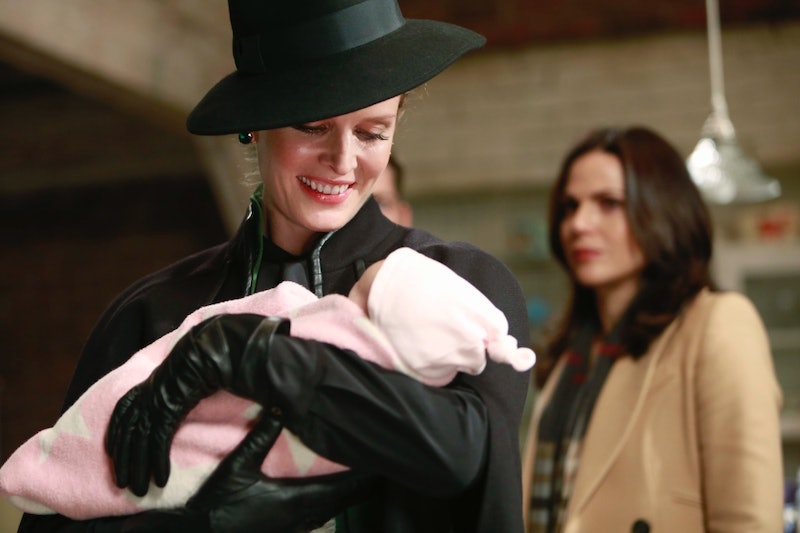 Ding dong, could the Wicked Witch be dead? OK, not dead, but certainly gone again from Once Upon A Time. In a big, giant green tornado, she's sucked away from Storybrooke, away to her destination, Oz. This is not the first time we've said goodbye to Zelena, so will we ever see her return again on OUAT?

Ever since showing back up middle of last season, Zelena has been a green thorn in everyone's side. She tricked Robin into sleeping with her, had his baby, and is now out to ruin everyone else. She also doesn't care who she leaves behind in her wake. The only thing that matters to her is her new baby.

Unfortunately for her, all that really matters to Regina and Robin is Robin and Zelena's new baby. Robin is pretty clear in saying that he won't let Zelena take the little one away. Zelena is completely unfazed by this, because she thinks everyone will be dead by midnight (because the Dark Ones are coming, and are going to suck everyone into the Underworld, and then she'll be free to run away with her new daughter, and raise her quite "wicked").

The only way to get rid of a half-sister who now has a baby with your boyfriend is via tornado. So, Regina conjures up a green one, and it sucks Zelena back to Oz. Feels like we've seen this set up before.

Before she's sucked away, Zelena yells that this isn't the last we've seen of her. But — sorry, Zelena — I hope this is the last we've seen of her, for at least like, two seasons. Does anyone really want to make that trip back to Oz? Didn't think so. It sounds like that where she's going to be stuck for a while, but she's not dead. And Regina and Rumple have her baby. Eventually she'll come back through Storybrooke.

But for right now I'm happy to keep singing about the fact that she's gone.

More like this
Everything We Know About When To Expect The Rest Of The Upshaws Season 2
By Kadin Burnett
Everything We Know About When To Expect Money Heist: Korea Part 2
By Kadin Burnett
These 2 Tragic ‘Stranger Things’ Finale Moments Were Improvised By The Actors
By Grace Wehniainen
Jesse Tyler Ferguson Had A Funny Run-In With A Fellow ‘Modern Family’ Alum
By Grace Wehniainen
Get Even More From Bustle — Sign Up For The Newsletter