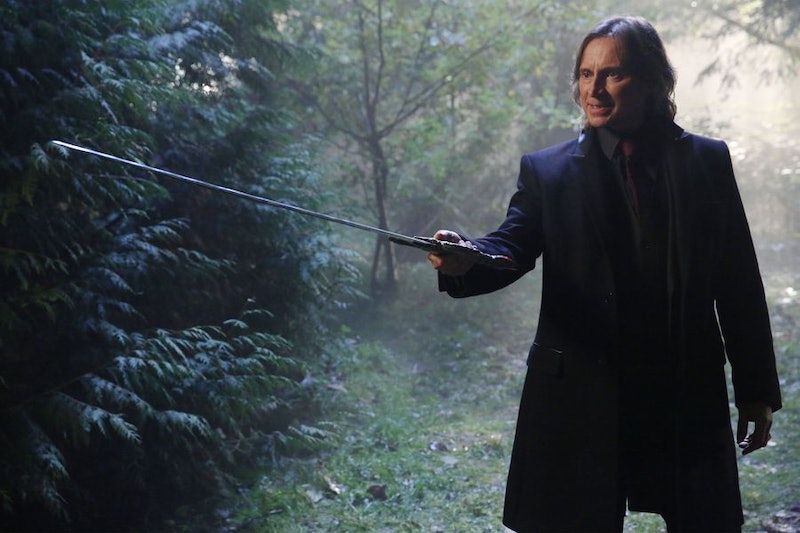 If you're feeling a little bit of Once Upon A Time déjà vu, you're not alone. It seems like everything has returned back to normal, and that includes the fact that Rumple is once again the Dark One. Yes, again. Yes, this is exactly right back where we started from in the beginning. After Hook loses his Dark One powers, and Emma loses her Dark One powers, everything transfers back to Rumple. But, it shouldn't actually be the case.

With Hook as the Dark One, the only way for Emma to stop him is to kill him. If she doesn't kill him, she has to consume the darkness herself, and both of them go through a handful of internal conflicts over the course of the episode, "Swan Song." In the end, Emma kills Hook, he dies, and the Black Darkness Smoke Monster disappears into Excalibur, which then disappears itself.

Or, does it? See, before handing over Excalibur to Emma, Rumple enchanted it. He put some sort of spell on it so when all the darkness disappeared, it really revered back to him, its last owner. Just because Excalibur is no more doesn't mean that the Dark One's dagger is gone, too. Emma knows it's still around, because she can hear it. That's not weird or anything.

Rumple confesses to Emma that he's got all his former power back, these two are at odds again, and Belle has no idea about any of this. Just like old times. But things already seem a tad bit different, because Rumple is actually willing to help Emma out with minimal arm twisting. With his dagger and his powers, he agrees to take Emma to the Underworld to retrieve Hook.

Maybe for the first time ever, having Rumple as the Dark One won't actually mean death and destruction for everyone. The Underworld sounds fun, doesn't it? Maybe while he's there, Rumple might happen to stumble upon his dead son — who only got one shout out during the episode, but it's enough for me. Maybe Rumple as the Dark One will be a good thing for once. Maybe.