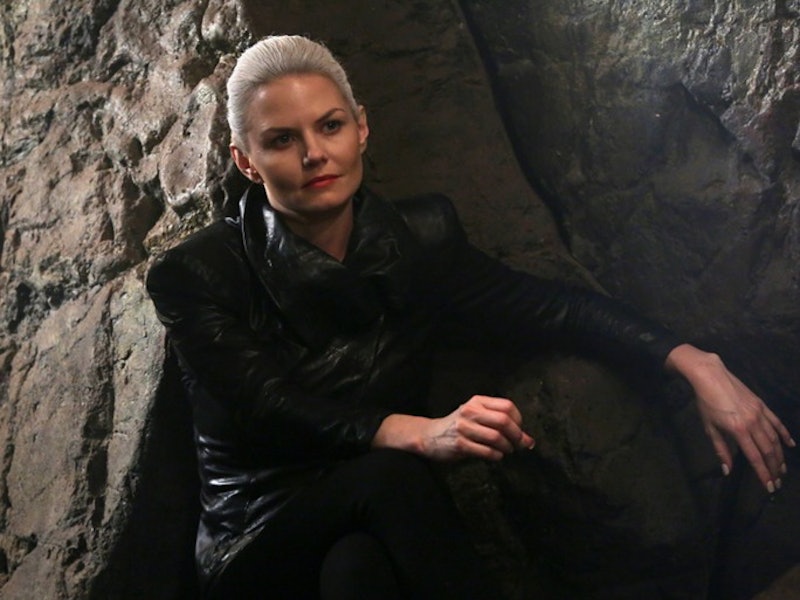 I know it's a bit early on in Once Upon A Time Season 5 to be wondering what's going to happen at the end of the season, considering we're only about three episodes in. After all, we fans have enough problems on our hands with Emma having gone dark and the entire town of Storybrooke (and Camelot, for that matter) under a curse the former Savior cast which conveniently removed their memory of their six weeks in the Enchanted Forest. All of that will be resolved in time, of course, but we know things are going to get a whole lot worse before they get better, and nothing proves that more than the latest tidbit. Executive producer Adam Horowitz revealed on Twitter that the mid-season finale will be called "Swan Song," and that's more than a little food for thought.

In Greek mythology, a swansong is defined as "a final gesture or performance, given before dying or retirement," which doesn't particularly bode well for at least one member of Storybrooke — although that's not at all surprising, given that we've been promised more than one death this season. The real question remains, however, who that will be, and if we're meant to take "Swan Song" as a literal title or if we should dig a little deeper for the hidden meaning. After all, sure, it's a great pun, what with Emma Swan being the Dark One and all, but there has to be more behind it, right?

The legend of the swan song stems from the belief (a false belief, I should add) that swans are silent throughout their lives, only to burst out into a beautiful song of sorts just before dying. It's very majestic-sounding and beautiful in a metaphorical way, but it's not quite true. Assuming we're making that reference for a reason when it comes to naming Once's mid-season finale, it seems to me as though quite a massive character will be experiencing a death... of sorts. Will it be Hook? (Yes, please!) Will it be Regina, who must pay "the price" (which remains unknown currently) as the Savior? Will it be Emma herself?

It's too easy to assume that a major character is just going to die and exit the series right away. Once rarely takes the easy road, for better or worse, so there's a chance that "Swan Song" could be referring to Emma taking her last action as the Dark One, or to the end of the Dark One as we know it. After all, we've got another eight episodes to find Merlin and get his help in destroying the Dark One for good and Saving Emma — we've just got to keep Emma from reuniting Excalibur with the dagger in the meantime. Yay!

On the other hand, we've got to consider the fact that Horowitz and Eddy Kitsis have promised that the second half of Season 5 will be "hell", so there's a chance we could be heading to Hades and someone is going to have to confront some serious demons (though they could make the return journey, and if it's a main character, they likely will). Only time will tell what's going to happen, but I can't wait to see how this arc plays out.