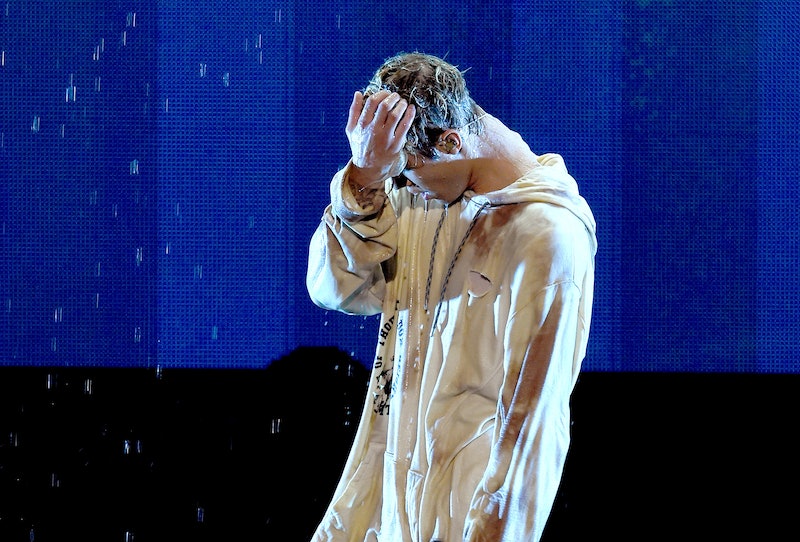 Listen, I was willing to let it go when it was only one photograph, but now Justin Bieber is purposefully trying to launch a conspiracy. Bieber posted another throwback picture of Selena Gomez on Instagram on Sunday, and the wild rumors that he just finished quelling last time have restarted with a vengeance. Unlike the last one, which was tagged "Just a throwback calm down," this throwback picture only comes with the caption "crazy throwback." They aren't even doing anything crazy in this particular photograph, so not only am I puzzled as to why Bieber is posting so many pictures of Gomez, but I'm also puzzled as to what exactly happened on the day this photograph was taken that makes him consider him crazy.

Even if I never find out the answer to the second question, I need to know the answer to the first. One picture is not noteworthy, but two or more pictures is a pattern that is indicative of something. Maybe Bieber himself doesn't know what it's indicative of yet. Maybe he's hiding something from all of us. Either way, I already have my own theories for what this sudden rash of Jelena pictures could mean. (Yes, two photographs is a rash. Shut up, and speculate with me.)

1. They're Reviving Their Friendship

2. He Wants To Get Back Together

He already said that he was open to the idea of a reunion with her, but, at the end of the day, just wanted her to be happy whether it was with him or not. Maybe these photographs of his way of putting feelers out there to indicate that he's ready and willing to try again if she is.

3. They're Collaborating On A Song

The photos haven't been ones that the singer took personally, so that might be our indication that this isn't about anything personal. Maybe the two are just working on a song together, and this is Bieber's way of doing some early, stealthy promo for it.

4. Justin Bieber Is A Giant Troll

We already knew this about him, too. SNEAKY, SNEAKY BIEBER.

5. He's Trying To Get Her Attention

Maybe Gomez hasn't been returning Bieber's calls, and this is his way of getting her attention. I mean, she might not check her phone, but surely someone is going to tell her that the recent headlines are indicating that Bieber is thinking of her?

6. He's Going Through His Phone

He has all of these photos saved on his phone, which he has been clearing out because he's reached his data limit, and what better way to clear a photo than by posting it to your Instagram? Then you can delete it from your phone and still keep it forever.

Maybe one of these is the right answer. Maybe none of them are. All I know is that Bieber is playing with my head, and he's the one who needs to answer that immortal question, "What Do You Mean?"