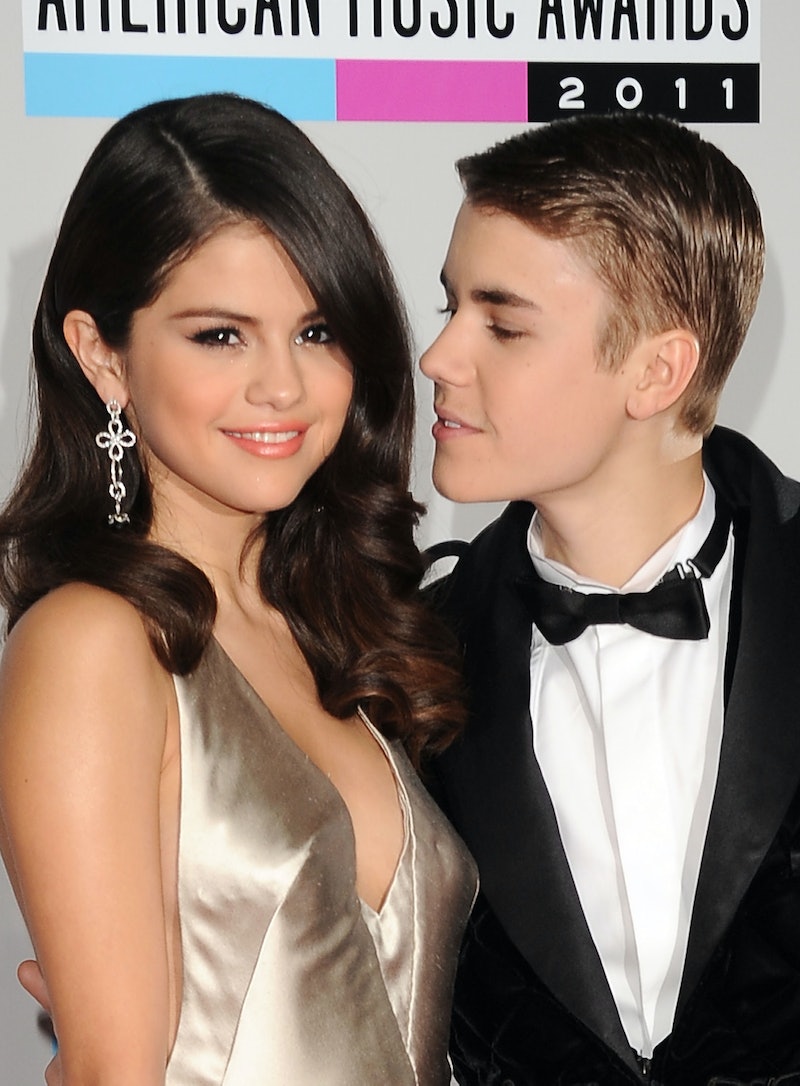 Sometimes, it's like celebrities don't even realize that we all have absolutely no lives and thus nothing better to do than to speculate about what's going on in theirs. Such was the case on Tuesday when Justin Bieber posted a throwback picture with Selena Gomez, causing his fans to launch into a confused spiral as they tried desperately to figure out if this picture was an indication that the relationship (trainwreck?) known as Jelena was back on. Even though their infamously on-off relationship may have caused a lot of frustration and eye-rolling in the general public, it's been very clear since the relationship became permanently off that the two still care about one another very deeply. Bieber has even revealed he is open to the possibility of Jelena getting back together, so it's not like it's an insane leap of logic to make.

The pop star has since added a caption to the photograph that reads, "Just a throwback calm down," so I assume the confused frenzy must have hit some sort of peak on Tuesday. But can you blame everyone, really? The picture is a paparazzi shot taking of him and Gomez from August 2014, when the pair went on a trip to Canada together and Bieber was subsequently arrested after a brawl with a paparazzo. With that context, I'm not sure if he's reflecting fondly back on his relationship with Gomez or trying to make peace with the photographer he got into a fight with or both. What exactly is he throwing back to? The world may never know.

Of course, that's hardly the first time that Gomez has made an appearance on Bieber's Instagram, and it surely won't be the last. From selfies to party pictures to this adorable shot of the pair of them at a birthday party for Ryan Butler, in which Gomez is looking at Bieber like he hung the moon, their relationship can be charted in photos that span across both singers' Instagrams and social media accounts.

But, even now, I'm still hesitant to believe that getting back together is the right thing for either of them right now. Gomez has recently released her wildly successful album Revival and been honest with the world about her lupus diagnosis, while Bieber has concluded his apology tour with the release of Purpose and has been genuinely reforming his behavior in ways that are making the world slowly warm back up to him again. They are both works in progress at transitional stages in their lives, and hitching their wagons back to each other when they had such a tumultuous history together would be wrong for them both right now. However, it's still good to see that they are still so fond of one another, even after everything. I do love me a good platonic friendship.

More like this
Selena Gomez Has Been Spotted Having Fun With A Top Film Producer
By El Hunt
Selena + Chef Season 4 Was Filmed At Hannah Montana's Old Malibu House
By Jake Viswanath
Leona Lewis & Husband Dennis Jauch Welcomed Their First Child
By Darshita Goyal
Who Is Camila Cabello Dating? She's Getting Cozy With Lox Club CEO Austin Kevitch
By Radhika Menon
Get Even More From Bustle — Sign Up For The Newsletter