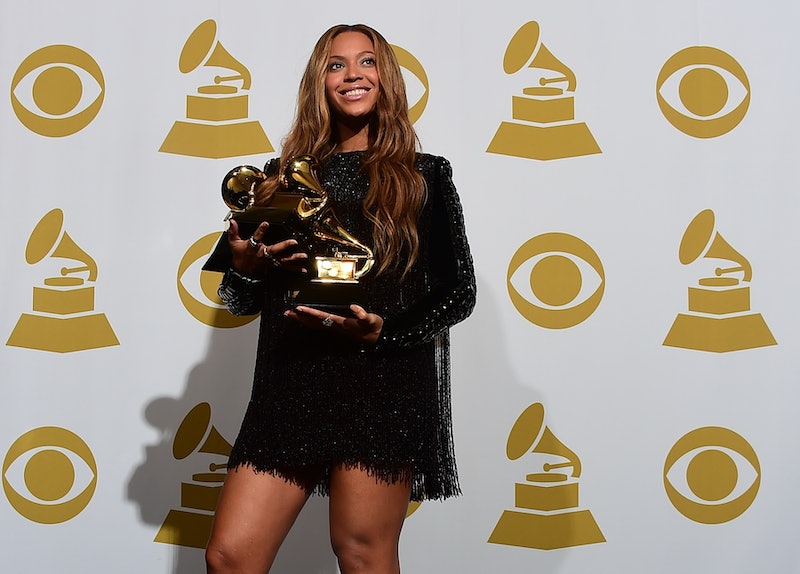 Hey, don't take this the wrong way, but do the Grammys actually matter anymore? There are so many award shows these days that you really have to do a lot to stand out, and, even though we're still calling the Grammy's "music's biggest night," I'm not sure it actually lives up to that designation anymore. For me, part of it is the fact that it seems like pretty much every big name in music has a Grammy, and many people have a bunch of them; it isn't like the Oscars, say, or the Emmys, where winning one becomes a career-defining moment. Instead, it feels more like just a stamp of approval that most huge artists get, which makes it lose meaning a bit for me.

For example, Adele has 10 Grammys, Taylor Swift has seven, Alicia Keys has 15, Kanye West and Jay Z have 21 each, and Beyonce has 20, six of which she won in a single night. Just to give you a little context. With people posting up numbers like that, it's hard to make the argument that this is the coveted be-all-end-all of the industry; the photograph of artists leaving the ceremony with their awards piled in their arms is a mainstay at this point. Can you imagine anything even remotely similar with the Oscars? Meryl Streep and Jennifer Lawrence trucking their night's haul out in a wheelbarrow?

So, with the awards themselves being so ubiquitous so as not to matter as much, it becomes about the show itself, about the performance put on by the attendees. It's a concert, basically, and, in order to hold onto its importance as an awards show, the Grammys needs to be the best concert of the year. And is it? I don't know! I think honestly that the MTV Video Music Awards are sneaking in on that title, a little bit.

The big sets, the huge names, the spectacle of it all, it all pops a little more in my mind. The VMAs is the show you actually need to tune into to make sure you don't miss anything; it's where Beyonce announced her pregnancy in 2011, where Miley Cyrus and Robin Thicke shocked the world with that "Blurred Lines" performance in 2013, where Kanye West interrupted Taylor Swift's speech in 2009, and where Britney Spears gyrated with that live python in 2001.

You can check the Grammy results the next day and not miss too much, but, if you don't watch the VMAs live, you're automatically behind the times. And, in today's social media-dominated society, that ends up being what's more important. So, while a Grammy is much more impressive in theory than a Video Music Award, the great pop culture moments the VMAs have given us are what stick in my mind more than any speech by a Grammy winner — no matter how heartfelt and tearful. So watch your back, Grammys! The MTV VMAs are in town, and they're taking no prisoners.