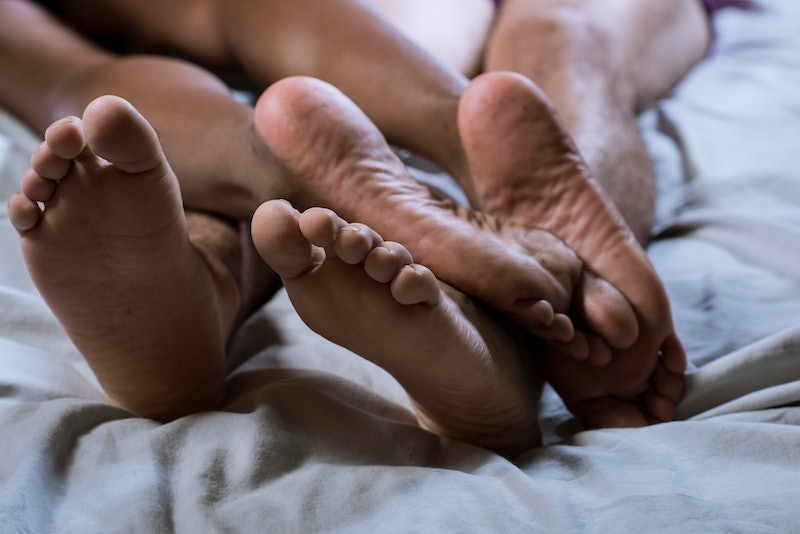 When it comes to sex, it might seem like a general rule of thumb is "the longer, the better": It's fun, so why wouldn't you want to enjoy it for as long as possible? Having sex for a prolonged period of time might have its advantages, but there are also benefits to having a partner who doesn't last long in bed.

While issues like erectile dysfunction and premature ejaculation can be extremely challenging to deal with (both for men as well as their partners), it's still possible to have a healthy, satisfying sex life. As long as both partners are open and honest and communicate about their sexual needs, there's no reason that having a partner with orgasm issues should stop you from having great sex.

Whether you're totally fine with the time it takes your partner to come or whether you're both actively working to last longer in bed, here are six unexpected benefits to having sex with someone who doesn't last long in bed.

If we're being honest here, sometimes having sex for too long straight-up hurts. When you're being penetrated continuously for a long period of time, it's natural for your vagina (or butt) to start to feel the burn, so to speak. Frankly, it can ruin sex when you start to get sore down there, because it makes it harder to focus on orgasming (or maybe you've already come multiple times and simply can't anymore). If your partner doesn't last long, you can rest assured that your genitals won't feel like mincemeat afterward.

2. You Don't Have To Get Super Creative

When you're with someone who seems able to go for ages before orgasming, chances are you'll switch positions a lot: As underrated as it is, you can't just lie in missionary for an hour straight without getting at least a little bored. While it's exciting to change things up, after a while, the both of you will probably start to run out of ideas for new, interesting positions. You can breathe a sigh of relief knowing that, with a partner who comes quickly, you'll only have time for your very favorite sex positions, and don't need to keep a copy of the kama sutra at your bedside.

If someone knows they're quick to orgasm, they're probably also self-aware enough to know that the best way to make up for a short intercourse session is by elongating foreplay. While premature ejaculation isn't necessarily a dealbreaker, what is a dealbreaker is having a selfish partner who doesn't understand the notion of mutual satisfaction. If your partner doesn't last long enough to make you come via penetration, they can make up for it in other ways, whether that's orally, manually, or with a toy.

4. You Won't Be As Exhausted

Obviously, sex is super fun, and it seems like one of those things no one would ever complain about having "too much" of. But if you're with someone who takes forever to get off, let's face it: You're going to be exhausted afterward. While that's fine if you're having sex right before you hit the hay for the evening, it pretty much eliminates the possibility of random sex throughout the day, unless you want to walk around all sweaty with the world's worst case of sex hair. Simply put: quickies have some serious benefits, and your partner not lasting long means that they're always in the cards.

No matter how much you genuinely enjoy giving blow jobs, that doesn't mean that your jaw doesn't get cramped up after a while — we're only human, after all. If you and your partner are engaging in an oral-only adventure and he doesn't last long, that could be a godsend for your mouth: You won't have to take breathers or pause to stretch out your aching jaw.

If you're dating someone who takes forever to get off, of course you can still have morning sex occasionally, most likely on a lazy Sunday where your only plans are brunch and a Christmas movie marathon. But if you're frequently horny in the morning and want to have sex before work, for example, that can be tricky when you only have a set amount of time before you have to be at the office. With a partner who doesn't last long, he can focus on your pleasure for as long as you need, and then he'll be able to finish quickly, too. You can both make it to work on time, with the satisfaction of knowing you had an orgasm to start your day — it's a win-win.