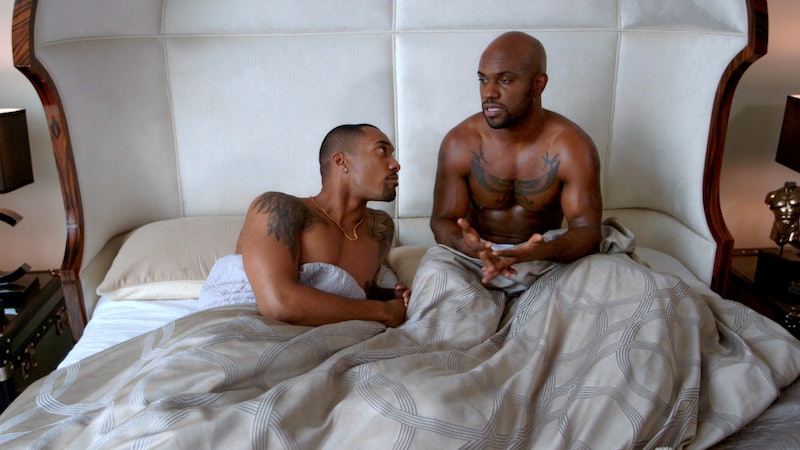 More than 3.6 million viewers tuned into the second season of VH1’s hit series Love & Hip Hop: Hollywood when it premiered in September. In Season 2, there's the usual friction between female cast members and their philandering partners. However, this season also features a groundbreaking first, as it shows the romantic relationship between rapper Miles Brock and producer Milan Christopher, two successful black men.

Miles and Milan occupy a unique space on Love & Hip Hop: Hollywood, and it isn’t due to their distinction as the first same-sex couple on the series. Executive producer Mona Scott-Young’s decision to present their relationship with tact and thoughtfulness separates the couple from their fellow cast members. Their romance isn’t sensationalized. Instead, the audience sees a real couple navigating and overcoming difficult issues.

Seeing a functional relationship between Miles and Milan on Love & Hip Hop: Hollywood is incredibly important, because there are so few same-sex relationships between black men on television, especially reality shows. “Moments like this don't happen often for black gay men, even in scripted television,” Drew-Shane Daniels, creator of Mused Magazine, a publication for modern gay black men, said to the Los Angeles Times.

Before Miles and Milan, there were few examples of black men in functional gay relationships on television. Omar Little, an unforgettable character played by Michael K. Williams on HBO’s The Wire, was homosexual. Throughout the series, Little was involved in three significant relationships. However, his crimes and street reputation were privileged over them. Noah’s Arc , a series that aired on LOGO, followed the lives of Noah, Alex, Ricky, and Chance, four gay African-American men living in Los Angeles. The ups-and-downs of their friendship and relationships were chronicled on the series. There's also Jamal Lyon, played by Jussie Smollett, on Fox's smash hit Empire. Jamal's father disapproves of his sexuality, and in a flashback is shown tossing Jamal in a trashcan as a young child because he wore a pair of heels. Similarly, Jeffrey Harrington, a character on OWN's The Haves & the Have Nots, faces harsh criticism for his sexuality. Harrington's mother refuses to accept him and often pushes him to date women, though he repeatedly tells her that he's gay.

Other than these prominent characters — three of whom are fictional — there have been extremely limited representations of black gay men on television. And when we have seen black gay men on reality television, it is usually in the capacity of the “sassy” friend who provides punchline material, according to Zeba Blay, culture writer for the Huffington Post.

“Historically, black gay men on reality shows like Love & Hip-Hop and Real Housewives have been relegated to B or C casts — they come in to make sassy jokes and play the best friend, but rarely are they ever given their own storylines that don't revolve around the straight main cast members,” Blay said. In contrast to this, Miles and Milan anchor their own plot on Love & Hip Hop: Hollywood. They’re not sidekicks to the female characters, and are never offered up for laughs.

Instead, Miles and Milan's relationship is presented with nuance and care, even though that's not common on the Love & Hip Hop franchise. For example, on Love & Hip Hop: New York , audiences were introduced to rapper and producer Peter Gunz. Gunz was living with his children's mother, Tara, for more than a decade. However, he was also secretly married to Amina Buddafly, a singer he was managing. Cheating is a common relationship problem, but this particular scenario is absurd. Yet in the case of Miles and Milan, Scott-Young prioritizes humanity, which was an intentional choice. “We’ve had same-sex relationships happening around us since the beginning of time,” the producer told the Los Angeles Times. “But somehow we tiptoe around the subject and we never want to give it the same prominence and visibility as we do heterosexual relationships. Here was an opportunity to do something that was reflective of our time.”

The introduction of Miles and Milan is definitely reflective of that, as they are first shown as a couple waking up in bed together. The twosome kiss and exchange playful banter. The decision for Love & Hip Hop to show their kiss, in particular, is actually revolutionary in and of itself. Daniels called this particular scene “thrilling” in an essay for Slate.

“A kiss might sound like a small thing, but you have to remember that moments depicting intimacy between two black men just do not happen often on screen,” he wrote.

What’s most striking about this introductory scene is its normalcy. We’re given a glimpse into how Miles and Milan navigate their relationship in the morning, and it’s no different than what most couples who live or spend the night together are accustomed to.

Yet, Miles and Milan still have a lot of stigma to overcome. One of the challenges in their relationship is Miles' fear of being outed as bisexual and losing clout in the hip hop community. He refuses to be seen in public with Milan, which causes conflict in their relationship. Milan even accuses Miles of cheating because of his hesitance to have a public relationship.

Rather than allow that fear to linger without explanation for the sake of dramatic television, however, the series' producers chose for VH1 to air Out in Hip Hop , an hour-long special that explored homophobia within the industry. A conversation between pastors and entertainers provided context for Miles' fear, especially as Pastor Jamal Bryant condemned all gay people to hell and classified homosexuality in the same category as adultery. As a result, Karamo Brown, a member of the Real World Philadelphia cast, shouted at Bryant for being homophobic. Out in Hip Hop also explored what it means to be a gay rapper.

“With hip-hop, we use disrespect as a form of power, and y’all got it bad," rapper DMC said in the special. "But in hip-hop, we disrespect the hell out of women. So what do you think they’re going to do to a gay man?”

“In this world we are a minority and [some people] don't like it,” Miles said in an interview with the Los Angeles Times. “It's hard. Being a black man, in hip hop and religious, I have so many strikes against me … all these hurdles.”

Love & Hip Hop shows how these hurdles have dominated Miles' life. Amber Hunter, his high school girlfriend, is also an integral part of his relationship with Milan. Miles and Amber are no longer dating, but they are co-parenting her daughter from a previous relationship and creating music together. Lauren has no idea Miles is bisexual or in a relationship with Milan. Secrecy is routine on reality television shows, because it provides an element of explosion when the secret is revealed. Drinks are tossed, hair is pulled, and slurs are thrown. For Love & Hip Hop: Hollywood, this is a ripe scenario for exploitation. Yet, the producers handled Miles' dilemma with shocking gentleness.

Miles tells Lauren that he’s bisexual with the assistance of a therapist. She doesn’t react well, and is inconsolable, even threatening to out Miles to his family and collapsing in the grass outside. However, instead of harping on this element of the storyline, the series' producers frame Miles as man attempting to live his truth. He continues his relationship with Milan and isn’t forced to offer apologies for being who he is.

Now that the season is over, it’s unclear what will happen next in Miles and Milan's relationship. They've since broken up, and Miles was arrested for allegedly assaulting Milan last October, according to Bossip, though Miles has denied the claims on social media. In a now deleted Instagram post, Miles claimed that Milan is "making a mockery of people that have ACTUALLY been abused" and that there is "no physical evidence, no proof, no witnesses." They’ve both also flung insults at each other on social media platforms and in radio interviews.

But regardless of what becomes of their future, Milan and Miles' past let Love & Hip Hop: Hollywood producers set an example of how reality television shows should handle gay relationships. The series provided space for two black men to have a relatable, complex relationship, and more reality shows should follow suit.