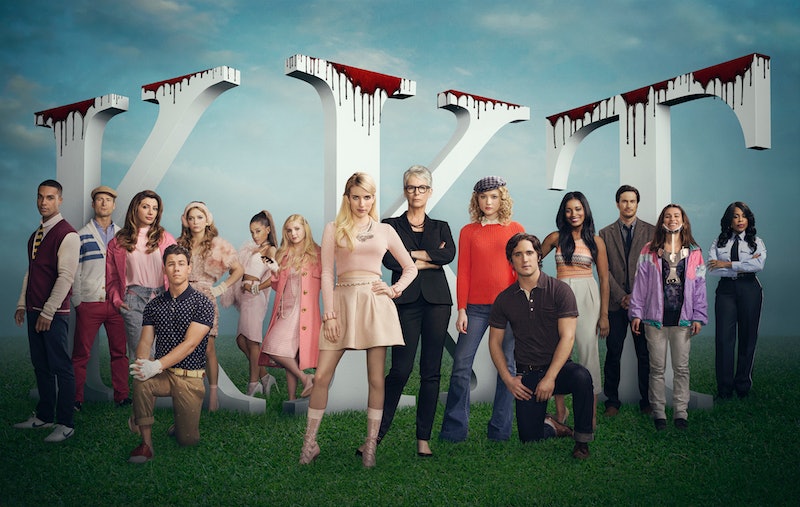 It's that time of year! Time for some TV shows to take their mid-season breaks, while others bring their seasons to an end. Scream Queens is going out with a bang that even Chanel Oberlin would be proud of: A two-hour season finale event. I'd say it's a good candidate for her third favorite holiday, after Chanel-'o-ween and Black Friday. However, we don't know if Scream Queens will return for Season 2, since Fox hasn't renewed the show yet.

The series premiered to lackluster ratings, and the numbers have declined further over the weeks, leading many to wonder if Scream Queens will have a second season at all. I know, that thought is even more terrifying that the serial killer plaguing Wallace University's campus. On the other hand, Scream Queens is a Ryan Murphy show, and he is Fox's darling — or at least, they seem to have a lot of confidence in his work.

Still, it's hard to say whether Scream Queens will come back. Even after using some investigative skills that Pete would be proud of, there's too much conflicting evidence to be sure about the show's fate. However, to keep you busy after the finale, I've put together a list of shows for those who love Scream Queens.

A little bit darker and more terrifying than Scream Queens, American Horror Story is Murphy's other horror series, following different stories each season. Chanel herself, Emma Roberts, appeared in two of the seasons (Coven and Freak Show) before going on to star in Scream Queens. American Horror Story goes more for scares than humor, so beware. The first four seasons are available on Netflix.

On the lighter side of the Murphy spectrum is his high school dramedy about a glee club. Glee stars Lea Michele (Scream Queen's Chanel No. 6, aka Hester) and features a cappella versions of popular songs and Broadway tunes perfect for any music fan. And if you want some horror, well, Sue Sylvester is certainly a terrifying villain at times. Sound good? The entire series is available to watch on Netflix.

If you watched MTV's Scream over the summer thinking it was Fox's Scream Queens, you're not alone, I promise. Of course, if you didn't — or if you gave it up when you realized it was the wrong show — it's certainly worth a watch if you're craving another compelling serial killer mystery. If you are (who isn't?), the first season is available on MTV's website.

Although it may not have the same over-the-top humor of Scream Queens, Pretty Little Liars certainly has the mystery and horror elements down. The show follows a group of girls who are terrorized by a mysterious figure after the death of their friend. The first five seasons are available to watch on Netflix. Prepare yourself for plenty of twists and turns.

This short-lived supernatural crime series follows a family that moves to a mysterious community called The Gates, which they soon learn is populated with werewolves, vampires, witches, and other supernatural beings. Before playing Grace on Scream Queens, Skyler Samuels co-starred in this show as a succubus named Andie. The show's only season is available on Netflix.

So although we may not yet know whether we'll see a Scream Queens Season 2, there's plenty to watch to keep ourselves busy after the finale.