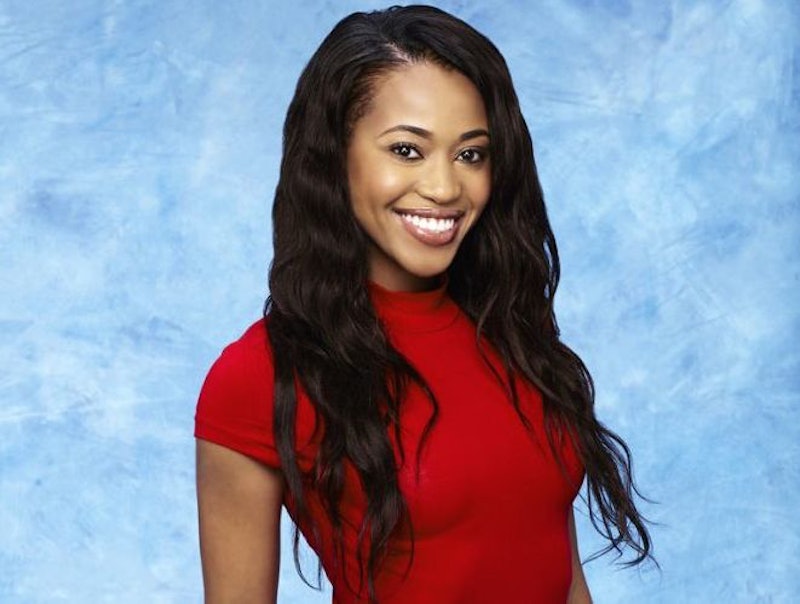 The 2016 season of The Bachelor doesn't premiere until Jan. 4, but it is never too soon for details to start emerging about the ladies who will be vying for Ben Higgins' heart. On Monday, all of the women were revealed and Bachelor contestant Jubilee Sharpe really stood out to me. From the start of Kaitlyn Bristowe's Bachelorette season Ben was a favorite to become the Bachelor, and it might have something to do with his adorable smile and sweet demeanor. Viewers love a good guy, so I think that everyone's expectations of this season's contestants will be very high.

What first struck me about Jubilee is that she has a really interesting superhero name, and that she is one of very few women of color on this season. Bachelor fans have been anxiously awaiting any tiny details about the upcoming Bachelor cast, and Harrison delivered with his selections of women to watch, which he shared with Yahoo!. Of Jubilee, he said,

She has a great name. It should be a nail polish. She was in the army and is a war veteran. She’s a very strong, bold, loyal woman. But she is also very down-to-earth and sweet. She has that attitude and strong will that fit her name. She’s the opposite of Amanda, who is quiet and demure. You get this intensity with her because she has the military background, but on the inside, she is actually very vulnerable and sensitive. She has an amazing story. She had a bit of a rough upbringing — born in Haiti, adopted by an American couple, and then served. Ben is impressed with her story as he gets to know her.

OK, Chris lost me at comparing her name to a nail polish, but I digress. It seems like there isn't a ton of information about Jubilee out there yet, which could be refreshing. Per Chris' bio, I do know that she was in the Army, and on a Bachelor fansite, she is listed as being a Private First Class at Fort Polk Garrison in Louisiana. She also is reportedly studying to be a cardiac sonographer technician.

Although Jubilee's Instagram is private, she does list South Florida as her location, as well as the fact that she is a Caribbean girl. This Twitter account and photo line up with her being the Jubilee from the next season of The Bachelor, but it has not been updated since October 2011. Scrolling though does confirm that fact that she was in the Armed Forces and stationed in Afghanistan.

The only other info I found was that a Jubilee from Miami, Florida had an account on ExploreTalent, which means she may have tried her hand at an acting or modeling career in the past. Many of the Bachelor contestants already have social media followings, so it seems like Jubilee is one of the few who is keeping it very low-key in the public.

Whatever the case, Jubilee stood out enough in this season to be mentioned by Chris Harrison, so I can't wait to see how she and Ben's relationship unfolds come Jan. 4.