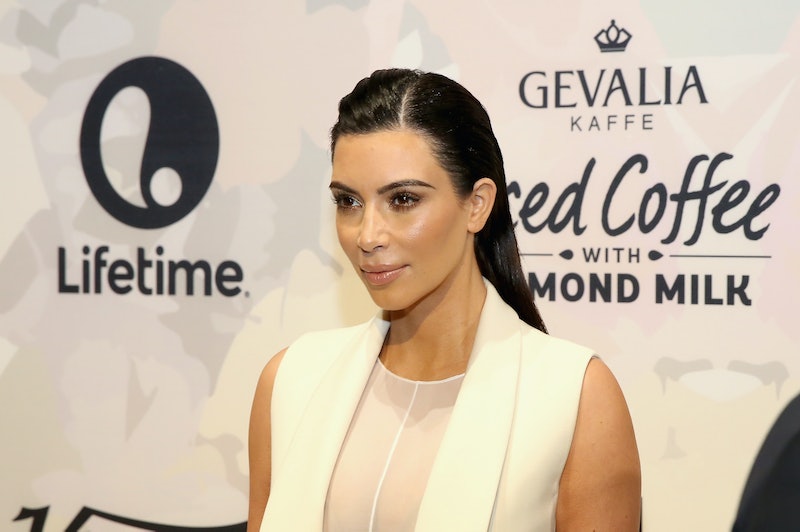 Alright, everyone, sound the alarms and prepare yourself to be attacked with cute because we now know what Kimye baby #2, North West's little brother, and future heir to the Kardashian-West throne looks like! On Saturday, proud momma Kim Kardashian shared the first photo of baby Saint West and, as expected, he is a beautiful bundle of joy. Kardashian showed off her baby boy Saint via her website, and this comes only a bit under a month after his birth on Dec. 5. Only two days after he was born, Saint West started making headlines for his epic name and with this photo, he's definitely going to take the world by storm again.

Unfortunately, the photo doesn't reveal the baby's face — that shot probably won't be released to the public for awhile, just like Kimye chose not to reveal North's face for a long time following her birth. But the photo does show Saint's adorable hand, wrapped around what looks to be big sister's North's. The new siblings' closeness is demonstrated in the shot's title, "BFFs." And on Twitter, where Kardashian posted the photo shortly after the website reveal, the star captioned it, "she said, 'he's my best friend.'" Aww!

While I wish Kardashian had chosen to share a full photo of her baby (come on, Kimye! We're waiting!), this initial shot is definitely adorable. Without further ado, here is the first photo of Saint West. He is just so cute!

More like this
Kim Kardashian’s Son Saint Had This Unique Request From The Tooth Fairy
By Alyssa Lapid
Kim Kardashian Gives “Bucket List Dream” Lecture At Harvard
By Alyssa Lapid
Kim Kardashian Buys Princess Diana’s Attallah Cross Necklace For $197,453
By Marina Watts
How Khloé Kardashian & Family Supported Tristan Thompson At His Mom's Funeral
By Brad Witter
Get Even More From Bustle — Sign Up For The Newsletter
From hair trends to relationship advice, our daily newsletter has everything you need to sound like a person who’s on TikTok, even if you aren’t.