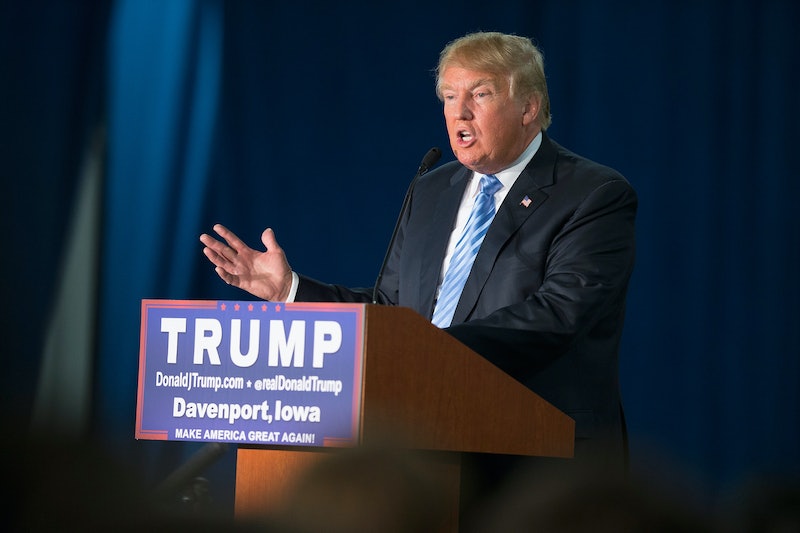 In a disturbing (yet unsurprising) development, Donald Trump has stated that he wants to ban all Muslims from entering the U.S. "Until we are able to determine and understand this problem and the dangerous threat it poses," Trump said in an official statement, "our country cannot be the victims of horrendous attacks by people that believe only in jihad, and have no sense of reason or respect for human life." To justify this racist, draconian proposal, Trump cited a poll of dubious reliability which purported to show high levels of support amongst U.S. Muslims for violence against Americans. Despite Trump's claims — and I can't believe this even needs to be said — America should not ban Muslims from entering its borders. It's an atrocious idea for several reasons; not the least of which being that it won't stop terror attacks.

Trump's latest plan pushes him substantially closer to being a literal fascist, as opposed to just a garden-variety fearmongering Republican. It also stands in stark contrast to Obama's speech from a day earlier, in which the president denounced blanket condemnations of Muslims in the name of thwarting terrorist attacks. In any event, Trump's proposal is not only anti-American and flagrantly bigoted, but it also wouldn't be an effective counter-terrorism measure. And it would likely make the fight against ISIS and other groups far more difficult than it already is.

Let's get this one out of the way immediately: Banning Muslims from entering the U.S. is not a good way to prevent terrorist attacks. For one, the vast majority of terrorism in the U.S. — over 90 percent — is committed by non-Muslims. This is an important point, so let's say it again: Muslims carry out just 6 percent of all terrorist attacks in the U.S. Jews, Latinos, and Communists (yup, they still exist) all commit more terrorism in America than Muslims. As a matter of public policy, trying to stop terrorism in the U.S. by banning Muslims is about as close as you can get to an objectively stupid idea.

Similarly, focusing on immigrants as a means of thwarting terrorism is also wrongheaded. One of the San Bernardino attackers, Syed Rizwan Farook, was born in the U.S., while many of the Paris attackers were born in France. And let's not forget people like Nidal Hasan and Robert Lewis Dear — both native-born Americans who committed terrorist attacks on U.S. soil. In short: The problem isn't immigrants, and the problem isn't Muslims.

Furthermore, banning an entire group of people from entering the U.S. based on their religion is flagrantly, patently un-American. This should also go without saying, but apparently it needs to be said. It goes directly against America's long, proud history of separating church and state — a tradition that's embedded in the First Amendment. While America does sometimes give immigrants of certain religious persuasions priority in gaining admittance to the U.S., this is usually only applied to religious minorities from countries which the U.S. is already at odds with. There's a world of a difference between that and flatly banning an entire religious group from entering the U.S., no matter where they come from.

Furthermore, Trump's proposal calls to prohibit all Muslims from entering the U.S. This means that U.S. citizens traveling abroad could not return to their home country if they were Muslim. That's shameful, unfair, potentially illegal, and has a lot more in common with Nazi Germany's treatment of Jews before World War II than anything resembling an American ideal.

It Would Be Counterproductive

In addition to not preventing terrorist attacks and tearing at America's moral fiber, banning all Muslims from entering the US would probably make America's fight against ISIS and other terrorist groups much more difficult. According to a report from George Washington University, there are around 300 ISIS sympathizers in the U.S. Blocking all Muslims from coming to America — even US citizens and refugees from war-torn countries — wouldn't stop these 300 Americans from doing anything. But it would, for reasons that hardly need stating, piss them off mightily. It would confirm, or appear to confirm, that the Muslim world is engaged in a war with West, which falls perfectly in line with ISIS's recruiting pitches to new members, as well as the group's general religious prophecy.

Banning Muslims from entering the U.S. violates America's separation of church and state. It also fails as a counterterrorism policy, and in fact could make the terrorist threat even greater. So ... let's not do it. Okay? Okay.