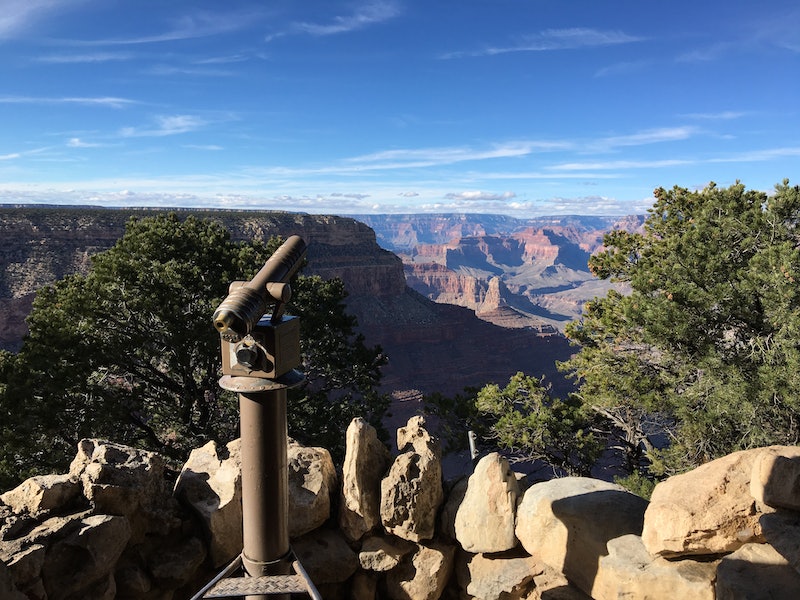 Though I first heard it years ago in middle school, Horace Greeley's classic line about Manifest Destiny — “Go west, young man!” — has always stuck with me. Perhaps it’s because I’ve spent all thirty-plus years of my life in the Northeast (the last ten in New York City), and there’s something particularly stirring to the Manhattan soul about the open terrain of the West. The true west — not the cities, but places like the Grand Canyon with great big skies and distant snow-capped mountains. The kind of west where the landscape harkens back to the era of expansion and possibility.

And after ten years doing the same thing in the same town, I’ll admit I’ve begun to feel like I’ve stopped expanding. My life up until this point has been about striving to get to New York, and then working hard to make enough money to stay. At the end of it, I realized I haven’t really gone anywhere, haven’t really done anything. Here is all I’ve been. I started to wonder what, now that I’ve been-here-done-that for a decade, is my next? What is my destiny?

For me, the Grand Canyon has always loomed in my mind as a kind of beacon. I thought that once I clamped eyes on it, this thing that’s been around for 70 million years, maybe I’d have a better sense of the world and my place in it. Great in theory, sure, but the idea of actually doing it? Going out there by myself? Scary. I worried that it felt self-indulgent, a bit ridiculous, even, planning a trip just to see a hole in the ground. Would my friends think I’m a total weirdo for not only wanting to go, but wanting to go alone?

Yet if I were to stop doing things I want to do just because I’d have to do them by myself, it’s quite possible I would never leave my apartment. Which is why I finally bought the plane ticket in a fit of carpe diem that would make John Keating proud. As I said to a friend the night before I left, “No pressure or anything, Grand Canyon but I need to have a transcending experience.”

It was sunny and 70 degrees when I touched down in Phoenix — typical early November weather for that area — and picked up my rental car. The Canyon is a four-hour drive north, and as I made my way through the mountains I kept thinking: AM I REALLY DOING THIS? Then: I’M REALLY DOING THIS!

I made a point not to listen to music or turn on the radio, and instead allowed myself quiet time alone to think — something I hadn't done in a long time. In this age of hyper-connectedness, it's been a long time since I felt truly alone. Our friends (and sometimes strangers) are just a tap or swipe away, making it easy to run the second that panicked feeling starts to settle in when we listen to our own thoughts too long. But here — eyes on the road, hands on the wheel — there was nowhere for me to go.

Less than an hour into my drive, those bright blue skies turned gray and opened up to a heavy downpour. That sucks, but okay. I'll be fine! As I drove further north, the downpour turned to freezing rain — less than okay, but I was still trying not to freak out. Then, before long, snow. And when I say snow, what I really mean is an actual, legitimate blizzard. Okay, I was finally freaking out now.

Turns out that I finally managed to do this trip on the exact day there was a literal storm of the century. Because of course. In a matter of minutes, it was a total whiteout, and I couldn’t see anything, not even the lines on the road or the car three feet in front of me. Coming from Manhattan, where I haven’t driven much in the last ten years, I was by this point talking to myself in the car (“You’ve got to be f*cking kidding me!”), and gripping the steering wheel like it was a life preserver.

When even the largest of trucks were pulling over and putting on their hazard lights, I made an executive decision to stop. I felt confident if I carried on the remaining 60 miles on the tiny two-lane road with about one percent visibility, I’d have a Donner party situation on my hands — and I wasn’t about to allow my fate, my destiny, whatever it may be, to turn out as grim as that.

Day one of my epic journey west ended with me sitting in a hotel bar in Williams, AZ (population 3,001) surrounded by a few locals who were drinking hot chocolate and schnapps, while the eleven o’clock news led with this storm and how the entire area was being shut down from record snowfall (not seen like this since 1925!). I drank as much whiskey as I could stomach in order to settle my nerves from the harrowing drive, and attempt to squash my feelings of complete and total despondency over this trip.

"I think I’ve made a huge mistake," was, I believe, my last thought before passing out.

In the morning, it took half an hour to defrost and clean off my car with a shredded snow brush borrowed from the hotel’s front desk. ONWARD! I called the Canyon lodge where I was staying.

“So is the Canyon, like, still happening?” I asked. I was worried the place was shut down from the snow and this entire trip was a total bust. They informed me the snow was already melting and people were definitely out there. My spirits were buoyed. #YesWeCanyon!

The remaining 60 mile drive in early morning sunshine was a breeze, and before long, I was at the park’s entrance. I’d already lost enough time so I made my way to the lodge, dropped my bags, laced up my sneakers, and set out.

At the South Rim, I got off the shuttle bus I shared with people from all over – I heard languages and accents from Germany, Australia, France and Russia – and then boom! There it was.

After surviving what felt like some real Oregon Trail-like adversity to get here (sans dysentery), the sight was even more amazing than I could have hoped for.

If you’ve never been, the Grand Canyon is extraordinary, and no picture can really do it justice. The scope of it alone just knocks your socks right off (good thing I remembered to pack extra socks!). There was so much sky! Like, just sky for MILES. It was endless. Coming from the city, I just forget it’s up there sometimes. I never look up, and even if I do, there’s a tall building in the way. But this. This is like a punch-you-in-the-gut kind of sky.

I spent the rest of the day walking alone along the south rim out to the western most point, Hermit’s Rest. I fell in and out of line with some groups as I walked. Families mainly, some couples (all of whom seemed to eye me curiously, as I was literally the only person walking around alone), until I out-walked them and left them behind.

I’m no Cheryl Strayed and it wasn’t the PCT. But it was pretty wonderful to have time to hike around the great outdoors, with no one to talk to and nothing to distract me. It was a special kind of peacefulness I can’t get in the city. One I imagine eludes most of us in our daily lives, no matter where we live. I didn’t know anyone, and I didn’t owe anyone anything — not a comment or an email or a reason for anything I did.

That night, guided by the stars and the flashlight on my iPhone, I made my way to dinner. In the morning, I woke at 5 a.m. and hopped back on the shuttle (this time with decidedly fewer people), to catch the sunrise at Yavapai Point.

What a thing it was to do something so simple, to simply stand in one place and just see. Days come and go over the rooftops of New York, but I don’t ever actually see it. I don’t stop and pay attention, or regard it as anything particularly special. Oh, great, another day. What a drag!

Here, however, all of us stood in silence with nowhere to be. No obligations other than to be present while this amazing and beautiful thing happened around us. People’s faces and attitudes changed. We were all freezing (it was a balmy 19 degrees), but as the first rays broke in the distance and illuminated the top of the Canyon, we all forgot about how we couldn’t feel our hands (or our ears and face), and instead just felt like we were a part of something. Something — and I’m not afraid to say it — grand.

And then I left, numb in body but not in spirit. All told, it took longer to get there than to actually see the thing, but I’ve come to find the best things in life, the most worthwhile things, never come easy (and Mother Nature is badass. Girlfriend makes you work for it).

I left the Canyon feeling like I accomplished what I set out to do. And for me, that was something. It’s easy to squash the real feelings that bubble up and attempt to complicate our lives, to yell "GO AWAY, FEELINGS! YOU’RE MESSING UP MY SAFE ROUTINE!" TBH, I can talk myself out of pretty much anything given the chance. I’ve done it when it comes to experiences, opportunities, even matters of the heart. I’ve always liked to think of myself as brave, but I’m a coward, same as anyone. Sure, I went to the Grand Canyon and drove through a snowstorm but I’m paralyzed, for example, to tell someone how I really feel.

If this had been a movie, I would have met a great guy and fallen in love (I didn’t), found some deeper meaning about life (there isn’t one), and given up on New York entirely (I haven’t). The big moments in life are a lot more nuanced than that. So, too, are the answers. What did change, what mattered (in addition to learning how to appreciate being quiet and still and detach myself from my phone), is that I went not knowing what to expect or what was going to happen. Learning to embrace the unknown ended up being much more important than the Canyon itself.

See, Horace, the thing is that our destinies, manifest or otherwise, are not already written; rather, they're shaped and built on the decisions and choices we make every moment, every day. Here at home in the East, I don’t know what to expect or what’s going to happen either, and this trip served as a reminder that if I really want something badly enough, it’s important to just do the damn thing. Not out of fearlessness, but in spite of the fear. Even, in fact, because of it. Do it and trust that, no matter what happens, odds are I’m going to survive the storm and come through the other side. Odds are I’ll be okay.

And maybe I'll even be a little better for having weathered it alone.