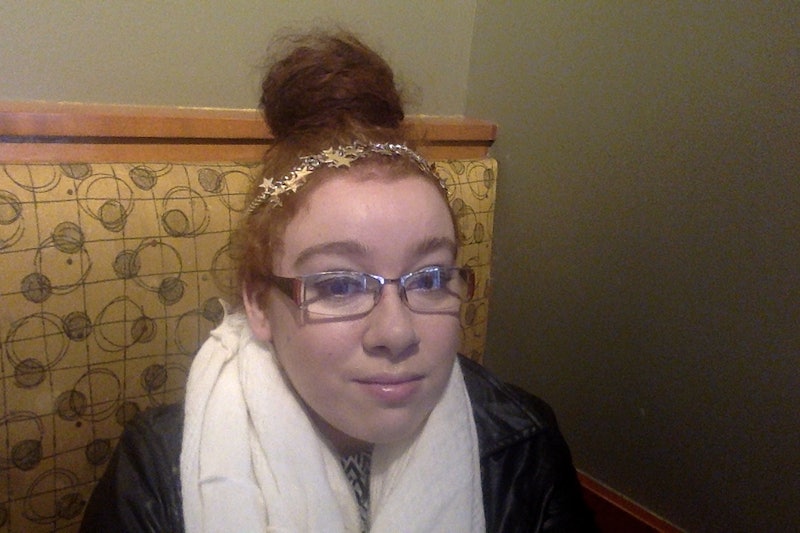 Having a strong Instagram game is what life is about these days, right? So if the thought of posting one of your most unflattering selfies makes you want to puke, then you'll be repulsed by the experiment I'm about to talk about. For one week, I shared only ugly photos on social media. Now, here's the thing about the "ugly" part. All of us can manage to look "ugly," if we're talking about how society at large defines such a word. Selfies are usually an illusion full of lighting, angles, makeup, and sometimes even retouching. So by social standards, we can all look gorgeous as fuck or ugly as sin if only we manipulate these factors. To be totally transparent, I don't actually think I'm ugly. But I wanted to post the photos I would never otherwise dream of sharing on Instagram to see what stepping outside of my constructed comfort zone would actually be like.

I am definitely guilty of posting mostly pictures in which I have a face full of makeup on and am sporting at least halfway "decent" hair online. I will occasionally share a makeup-free selfie, sure, but it's just not how I feel my best. I am a very feminine woman, and make no apologies for my love of fashion and beauty.

Nontheless, I was excited to see how this challenge might push me to appreciate my body without all of the glam. The rules were simple: All photos I posted of myself had to be ones I normally wouldn't choose. Ones I, or the so-called rules that dictate our perceptions of beauty, might even deem unattractive. Here's how my week went.

I decided to start the #uglyphotochallenge on my birthday, of all days. And I found that posting an "ugly" photo of myself with a scowl on my face and no makeup on actually made me feel like shit. It didn't really matter to me what people might say, or whether they commented at all. It just made me feel like I was putting a less than desirable version of myself out there — one I didn't gravitate toward naturally.

This put a damper on how I started the day, since I felt an overwhelming sense of melancholy that would eventually spiral into full-on self-loathing.

Interestingly, it was getting a free pastry from my favorite coffee shop that made me see the day from an entirely new perspective. I became fresh, energized, and felt free. To go from self-hating over what I had deemed an ugly selfie to feeling good about myself purely by eating a delicious piece of baked goodness reminded me that body positivity is so often in the little things.

Later that day, I posted another #uglyselfiechallenge photo and didn't even feel fazed by it. It's all in your perception, people.

It was very difficult for me to not want to post a really cute picture of myself from my birthday dinner, since my mom had taken pictures of my outfit from two different angles — one making me me look much smaller than the other. I was tempted to break down and post the one I deemed to be more "flattering," and somehow justify it by claiming it was ugly. I trekked on nontheless, and shared the photo in which I'm at an angle that makes me look larger. And I hated posting it.

As time went on, I kept fantasizing about what it would be like to take down that image and replace it with the one taken at a better angle in a few weeks. I had to confront my body image issues head-on with this one. Despite considering myself a body positive proponent, it was truly difficult to not equate my self-worth with this photo that was making me feel inadequate. Like any human, I still face a lot of struggles in learning to love and accept my body. As I've been working out more and changing my eating habits lately, I've noticed myself getting a bit smaller, and I found it hard to not say, "But I really look a lot smaller than that," when posting this.

I normally make it a point to stick my chin out (a tip I actually learned from none other than the selfie queen Kim Kardashian herself) when I'm taking a close-up selfie. But while I was riding in my Lyft, I felt the urge to smile normally and stick my chin in, so that you could see my double chin as I faced an insecurity. I actually thought I looked really cute in the photo, and found that my double chin really wasn't the "problem" I had branded it as. This is when I realized I was actually learning from this challenge, since my first major lesson was that our insecurities are often unfounded and rooted in things no one else would likely even know about or think was a "bad" thing. So much of this stuff is in our own heads.

On the fourth day of the challenge, I posted two "ugly" selfies — one of me with a very messy and off-center bun, and another that shows me frowning in what I would again deem an unflattering angle. It had been a reject from an impromptu photo shoot only a few days ago.

The topknot is my signature hairstyle, but I work hard to shape my bun to be perfectly round and symmetrical. The bun being in the exact center of my head is usually important to me too. I often fix my bun at least five or six times a day, since it can easily get messed up when changing, cooking, or even walking in the wind. Here, I was about to fix it again. But instead decided to take a picture with it messy and off-kilter just to show what my bun actually looks like when I haven't fixed it in a while.

I also tend to think I look best when I'm either showing the top row of my teeth or smiling with a closed mouth. I had an emotionally abusive partner several years ago tell me that I didn't look pretty when I smiled with my teeth. Literally every single time I smile with teeth in photos, those words play in the back of my mind. Posting the second image definitely caused me to think about this all, and made me want to push toward separating myself from his point of view, or that of anyone else for that matter.

I posted quite a few ugly pictures on this day, starting with a late-night selfie in my a T-shirt that reads "Boyfriends Are Overrated," which completely summarizes the state of my romantic life right now. You can clearly see my nipples in the image, and since I don't wear bras unless I'm working out, it felt really awkward not to hide them with another layer. But true to the challenge, I posted the photo.

I actually felt really confident in this outfit and the subsequent image. Even looking at it days later makes me smile. I was unapologetic and strong, and am proud that I posted it.

My mom and I later found ourselves both wearing these printed jackets, and she thought the twinning would make for a great picture. This is exactly the kind of image I would normally consider an "outtake," since this angle arguably makes me appear larger. But I actually think it's adorable. I'm even starting to love my smile. This challenge is seriously changing my perceptions of myself, since just the day before I felt insecure over a photo in which my toothy grin was on display.

Later still, my mother and her boyfriend decided to take me to dinner to celebrate my birthday at an awesome sushi and steakhouse place near our home. The servers gave me ice cream with this amazing lotus blossom candle that danced. It made me happy, as you can see in this picture. I looked at it and felt cute, pretty, and empowered. I had officially decided to not let that ex's comments about my smile dictate my behavior. I was free.

On this Sunday morning, I was up bright and early to head off to Miami for a relaxing vacation to celebrate my birthday (and the fact that I gotten through another year). I took this selfie in the airport at 7 AM as I awaited takeoff. As you can see, I had no makeup on and chose a really bright angle to show off my pale skin. Whenever I look at this one, I further remember that a lot of my insecurity is in my mind. Even with messy hair and zero makeup, I look good.

Later in the day, I posted this #OOTD photo, in which I originally hated the lighting and the angle that cut my legs off and reflected them back in a different part of the mirror. I do look short, and I am short, but I can obviously be fabulous at any height.

On the last day of the challenge, I thought I'd be more excited it was over. Instead, I found myself enjoying posting these "ugly" photos and how they all forced me to push my boundaries. I decided to do just that with my first picture of the day, while wearing this sexy blue one-piece. I really love this suit and was feeling myself in it, but debated whether I should do my hair and makeup before sharing it with the world. I also gave off a really big smile, and barley even thought about this characteristic that had me tripping a week ago. You can also see some nipple, but to be honest, IDGAF.

The last selfie I posted during this challenge was when wearing this lacy punk outfit, which I debated sporting in the first place due to lingering insecurities. I always get a lot of anxiety when I want to wear an outfit I know makes a statement and stands out, just because I fear people questioning me or judging me for being different. But I decided to push past the fear and do it, and I'm so glad I documented it on Instagram. Even if this lighting makes me look washed out.

So What Did I Learn About Ugliness?

I can't possibly summarize the effects of this experiment in just a couple of words. This entire process made me confront the insecurities I was (and am) still harboring, and how they hold me back. It forced me to get past internal shame and doubt, while reminding me of the importance of pushing your self-prescribed limits. It also made me question "why" I have the insecurities I have. And in doing so, it presented me with the simple truth that those insecurities are too often rooted in the opinions of others. Opinions that shouldn't matter.

Most importantly, I learned that there is no way to take an ugly photo. No one is ugly. Ugliness is a fake construct that we invented to keep people from loving themselves. Moving forward, I'm not going to put nearly as much thought into my Instagram photos or take 20 selfies before I post one. I have loved pushing myself. And the amazing internal results are even more satisfying than the photos themselves.