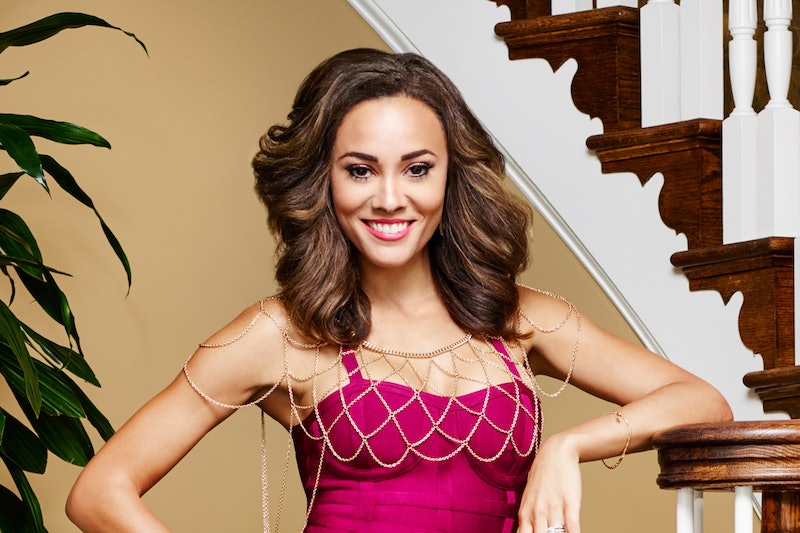 Shortly after we ring in 2016, we'll have something else to celebrate — The Real Housewives of Potomac premieres on Bravo on Jan. 17. (Not that I'm counting down the days or anything.) Sure, there are already plenty of shows in the franchise — but, personally, I can always use an extra hour of drama and scandal in my week. Of course, there are a lot of real housewives to keep track of, and they come and go so quickly that sometimes it's tough for even the most devoted fans to keep up. So, I think we should get a head start before the newest installment kicks off. I'm looking forward to meeting all the cast members — but I'm especially intrigued by Ashley Darby of Real Housewives of Potomac.

According to her bio, Ashley wasn't always wealthy and she's extremely hardworking and driven. As a teenager and college student, she worked a variety of jobs in order to support her mom and younger siblings. While bartending, she was discovered by a talent scout and went on to win the Miss District of Columbia Pageant. Shortly after winning the crown, she met Michael Darby and they tied the knot after four years of dating. Although the marriage made her a millionaire, Ashley is ambitious and eager to build a career of her own.

Here are seven things to know about Ashley before we officially "meet" her in January:

1. She Recently Opened A Restaurant

Ashley opened her restaurant, Oz, in September. Her husband is an Aussie, and the menu features modern Australian cuisine — and a killer cocktail menu. Plus, the decor is gorgeous.

2. She Has An Adorable Dog

Look out, Giggy — you have some canine competition in the Real Housewives franchise. Ashley's maltipoo, Geronimo, is super cute and I seriously hope he gets plenty of screentime.

3. She Appeared On Say Yes To The Dress

If you're a diehard fan of Say Yes to the Dress, Ashley might look familiar — she appeared on the show in January 2013 while she was planning her wedding.

Although Ashley's days of competing in beauty pageants are over, she was in Atlantic City to cheer on Miss District of Columbia in the most recent Miss America competition.

5. She's Close With Her Mom

It's clear from Ashley's social media accounts that she and her mom are inseparable — and their relationship is too sweet.

Ashley and Michael make frequent trips to Australia, and she loves spending time there — so it's really no surprise that she chose to serve Aussie cuisine at her restaurant.

Ashley climbed Kilimanjaro on her #adventurehoneymoon, and she also bikes and kayaks. So, although she's super stylish, I wouldn't be surprised if we see her rocking some athletic gear on Real Housewives of Potomac.

I can't wait to see what this ambitious, adventurous woman brings to the show. Is it January yet?