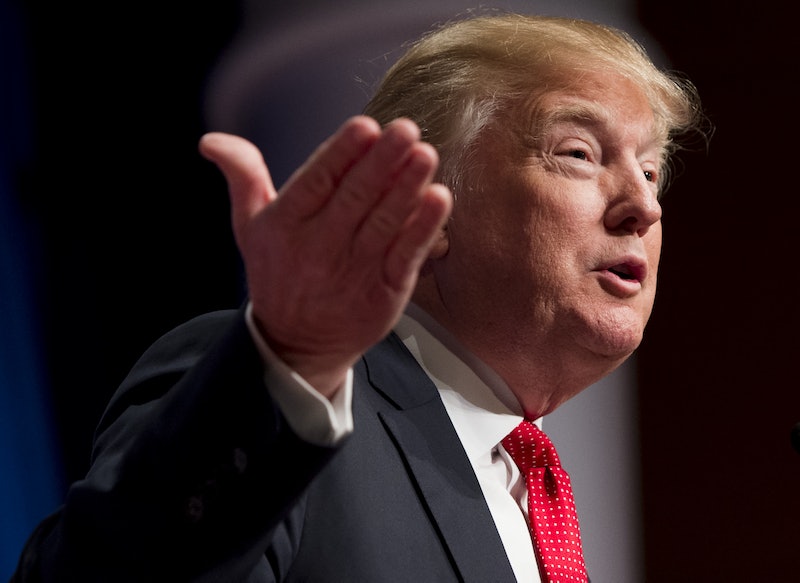 Republican presidential candidate Donald Trump has employed shock value in all of the wrong ways to garner national attention, and more than one of Donald Trump's quotes are, in short, the absolute worst. Let's just say, Larry David probably wasn't joking when he shouted "You're a racist!" at Trump from the sidelines on Saturday Night Live. Trump is basically the antichrist when it comes to political correctness, and his constant stream of offensive remarks suggest he is proud of it.

And sure, I understand why his general disregard is appealing to people who are sick of the superficial politician that makes hollow promises just to appease a constituency. It's safe to say that Trump doesn't answer to anyone — but fundamentally, that obstinacy threatens the basis of an inclusive democracy that is open to more than one train of thought. He takes his lack of concern to an extreme that is xenophobic, un-American, and all-around not OK.

At a South Carolina rally on Monday, Trump suggested that the United States ban all Muslim people from entering the country, and effectively alienated much of his own party. Even former Vice President Dick Cheney had something to say on the matter.

Well, I think this whole notion that somehow we need to say no more Muslims and just ban a whole religion goes against everything we stand for and believe in. I mean religious freedom's been a very important part of our, our history.

Shrugging off political correctness is one thing; dismissing people's humanity is another. And with another GOP presidential debate coming up, surely this won't be the last of Trump's offenses. 2015 is nearing its end, and these are the worst of Trump's horrifying quotes this year — thus far, at least.

1) Faces Matter (But His Hair Doesn't)

In a Rolling Stone magazine profile, Trump is quoted as commenting on the appeal of Carly Fiorina's face. I wonder whether he thinks his hair is fit for the presidency.

2) When In Doubt, Build A Wall

Donald Trump kicked off his campaign with this unlikely plan for solving the broken immigration system.

First things first. Trump, you're no Julius Caesar and you can't refer to yourself in the third person. More importantly, his comment, made at a South Carolina rally on Monday, exploits America's already inflated fear of Muslim migrants, encouraging cultural divides and xenophobia. Essentially, Trump "Make America Great Again" is encouraging America to violate the First Amendment.

Donald J. Trump is calling for a total and complete shutdown of Muslims entering the United States until our country's representatives can figure out what is going on.

4) Muslims Were Cheering... And Everyone Remembers?

Trump made the unfounded accusation on a Nov. 22 episode of ABC's This Week, referring to similar comments made at an Alabama rally the day prior. Again, Americans can't afford to be pitted against each other right now.

There were people that were cheering on the other side of New Jersey, where you have large Arab populations. They were cheering as the World Trade Center came down.

5) Your Kids Can Protect Themselves Against Disease

Leave it to Trump to find a way to weasel his faulty medical know-how into the first GOP debate, hosted by CNN.

You take this little beautiful baby, and you pump — I mean, it looks like just it's meant for a horse and not for a child, and we've had so many instances ... [in which] a child, a beautiful child went to have the vaccine, and came back and a week later had a tremendous fever, got very, very sick, now is autistic.

6) It Doesn't End With Mexicans And Muslims

7) Gonna Wing It When It Comes To "Winning" With China

Can't say China's ever been a contestant in The Apprentice, so I'm not sure where he gets the idea that he can "win" against other countries. During his campaign announcement in June, Trump suggested otherwise.

8) There's Already Trash So Go Ahead And Litter

Trump shrugged off climate change in a post-debate appearance on MSNBC in September. China is clearly doing wonderfully after Beijing issued a red alert due to high levels of pollution.

9) His Plan To Defeat ISIS Must Remain Secret

In a May 28 interview with Fox News' Greta Van Susteren, the Donald made some promising comments.

I'm sure everyone feels much safer now.

More like this
'The Capture' Is Finally Back – & S2 Looks Tense AF
By Sophie McEvoy and El Hunt
The Lionesses Are Calling For Equal Access To Football In Schools
By Sophie McEvoy
How Marvel’s 'She-Hulk' Changes Her Comic Book Origin Story
By Brad Witter
The 'PLL: Original Sin' Season Finale Finally Revealed A’s Identity
By Alyssa Lapid and Kadin Burnett
Get Even More From Bustle — Sign Up For The Newsletter