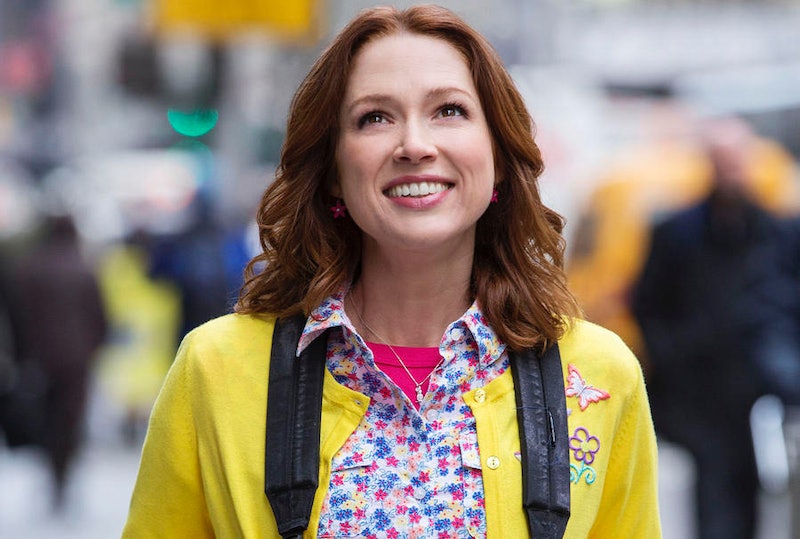 It’s no secret that the Golden Globes love to nominate the big names every year, but it also loves to award newcomers in both television and film. There were first-time winners at the 2015 Golden Globes, including Jane The Virgin's Gina Rodriguez, The Normal Heart's Matt Bomer, Eddie Redmayne The Theory of Everything, Patricia Arquette and J.K. Simmons — the latter three all ended up winning the Oscar too. Thus, when doing any list of 2016 Golden Globes nominations predictions, it's best to give due attention to those underdog actors and shows.

The awards show, which will air on Jan. 10 on NBC, is also known for shaking things up, often due to the way they break up the film categories into Drama and Comedy. Some movies that one may consider to be a drama may be competing in the comedy category, like The Martian and Jennifer Lawrence's Joy. And yes, some of these weird Golden Globes category facts will leave you scratching your head, but it does make for some interesting nominations.

So, below, I've come up with a list of safe bets and long shots that I'd like to see the Golden Globes take notice of — many for the very first time since it would be nice to see some new names and faces on the carpet. Some may seem a bit too gutsy for the awards show, bu,t as the Globes have shown, sometimes those surprise turn into sure bets on the night of the awards.

Straight Outta Compton: The film ruled the box office this summer and was taken very seriously by critics, though it may seem like a long shot, it may be right up the Hollywood Foreign Press Association's alley, allowing a bit of diversity into the category.

Creed: Ryan Coolidge found a new way to tell Rocky Balboa's story that has him dealing with his own mortality as he helps his one-time nemesis Apollo Creed's son find his own way. Like Straight Outta Compton, it's been a hit with filmgoers and critics alike, so it has a good chance of being on the HFPA's radar also. Besides, who doesn't love a comeback story?

Beasts of No Nation: Netflix showed that they were a force to be reckoned with when it came to TV, so why wouldn't they be acknowledged for their latest foray into film? A dark and serious look a child soldiers made by that guy who directed True Detective.

Inside Out: I'd love to see them recognize this Pixar film for being more than an animated feature. It's a complicated, often sad story that gets at what it's like growing up, done in a way that both parents and their kids can enjoy.

Spy: Should have been a shoo-in for the category, but, with so many films that many would call dramas being considered comedies at this year's awards, the race for this prize got a whole lot tougher. But there is no doubt this Melissa McCarthy film is a comedy, and should be a natural choice to make the cut.

Tangerine: This small indie comedy-drama, filmed on an iPhone, nonetheless, is a comedy in the style of Thelma and Louise, that looks at two trans sex-workers (both played by trans actors) who are trying to get back at the pimp who has been stealing their money. It would mark the first time a movie starring transgender actors that has been nominated in this category, and, for an award's show that praised Transparent, it doesn't seem like an out of character move.

Me and Earl and the Dying Girl: Voters may have forgotten this bittersweet comedy about a high school boy who befriends a girl with leukemia, but we're hoping they don't, since director Alfonso Gomez-Rejon showed us shades of Wes Anderson with his quirky cinematography, a director the Golden Globes has taken a liking too. Awarding Anderson with this same prize last year for The Grand Budapest Hotel.

Best Actress in a Drama

Charliize Theron, Mad Max: Fury Road: She's the best example of a feminist action hero, who is only interested in saving the lives rather than finding a boyfriend. And does so with few words, letting her actions do all the talking.

Kitana "Kiki" Rodriguez, Tangerine: A breakout at this year's Sundance, the American transgender actress' first role showed she could handle comedy, drama and revenge and could earn her a nomination.

Best Actor in a Drama

Michael B. Jordan, Creed: Jordan showed he had the right stuff in this film that called for someone to not only act like a boxer, but learn how to box. The fight scenes are some of the best put to film and a lot of that has to do with Jordan's dedication. Besides, the Globes owe him for not nominating his performance in 2013's Fruitvale Station.

O'Shea Jackson, Straight Out Of Compton: It's not easy to play a real person onscreen, even tougher when that person is your dad, but the son of Ice Cube perfectly portrays his dad in the N.W.A. biopic and should be acknowledged for doing so.

Abraham Attah, Beasts of No Nation: Just call him the Quvenzhané Wallis of 2015, who stole our hearts in another Beasts movie, Beasts Of The Southern Wild, by making acting look easy. This was the Ghanian's first role and boy was it a doozy. But he is the heart of the movie as the young child solider who is enlisted into a war he is too young to understand.

Best Actress in a Comedy or Musical

Bel Powley, The Diary of a Teenage Girl: The British actress should earn her first nomination for a role that had her playing a child, but acting like an adult.

Amy Poehler, Inside Out: Could you imagine anyone else voicing the rambunctiously happy Joy in the Pixar film? Us either. If that doesn't earn someone a nomination, we don't know what will.

Best Actor in a Comedy or Musical

Bill Hader, Trainwreck: He was Amy Schumer's partner in comedy in her first feature film, showing that he wasn't only funny, but could be a leading man.

Adam Scott, The Overnight: This small indie film that looks at two couples spending a wild night together is funny and weird in the best way. And somehow Scott manages to play it straight the whole time.

Paul Dano, Love & Mercy: To represent the musical element of this category consider Dano's portrayal of Brian Wilson in his younger years.

UnREAL, Lifetime: It's not often a show on Lifetime gets critical buzz, but this satire of those dating competitions like The Bachelor and The Bachelorette was funny, dramatic and as good as any drama on TV.

Mr. Robot, USA: This suspenseful look at a delusional hacker's life had a shocking reveal that made it one of the best shows of the year.

Outlander, Starz: This steamy fantasy series was snubbed by the Emmys, we imagine the Globes won't dare do the same.

Better Call Saul, AMC: After sleeping on Breaking Bad, the HFPA will probably want to right their wrong and nominate this on its first go.

Best Actor in a Television Drama

Rami Malek, Mr. Robot: The most untrustworthy narrator on TV kept us questioning what is real and what is fake. But Malek's talent is never in question.

Sam Heughan, Outlander: That hair alone should earn him a nomination, but since this is an acting category it helps that he's also great at that too.

Kyle Chandler, Bloodline: Coach Taylor was never honored by the HFPA, so what better way to make it up to him than recognizing how good he is on this Netflix series.

Best Actress in a Television Drama

Viola Davis, How To Get Away With MurderTaraji P. Henson, EmpireRobin Wright, House of CardsKeri Russell, The AmericansRuth Wilson in The Affair

Tatiana Maslany, Orphan Black: Let's be honest, this is Taraji's award to lose and, if she does, it will most likely be to recent Emmy winner Davis, but how can you ignore the skill of an actress who can play multiple characters who are often acting opposite each other? The truth is, you can't. She won in 2014 and we wouldn't count her out for 2016.

Caitriona Balfe, Outlander: She's hard to ignore on the time-traveling series that she somehow manages to keep grounded in real life.

Shiri Appleby, UnReal: She's a woman who sees like she's always on the verge of a mental breakdown, but she also realizes that makes for good TV. Appleby seems to understand that too.

Priyanka Chopra, Quantico: A complete newcomer, marking her American debut with this crime show that has her playing it tough and could earn her a first time win at the Globes.

Unbreakable Kimmy Schmidt, Netflix: The Globes have always been fans of Tina Fey and with her latest comedy for Netflix she showed females were strong as hell and just as funny.

Master Of None, Netflix: Aziz Ansari's series is one of the most talked about of the year and because this is a group of journalists voting, it's likely that will bode well for the brand new show.

Broad City, Comedy Central: Snubbed by the Emmys, the Globes may choose to right that other awards show wrong. If not, we can at least expect a great tweet from one of the broads, Abbi Jacobson.

Best Actor in a Television Comedy

Aziz Ansari, Master Of None: The Parks and Recreation actor showed he was more than a supporting player and taught everyone a little bit about diversity

Anthony Anderson, black-ish: He's the answer to all those fans who miss Cliff Huxtable.

Rob Lowe, The Grinder: Lowe plays it silly on this new comedy that has people talking, and more importantly, watching.

Best Actress in a Television Comedy

Contance Wu, Fresh Off the Boat: She shows that any stereotype you had about tiger moms aren't really true, while also providing us with tons of comedy.

Tracee Ellis-Ross, black-ish: If Anthony Anderson is the answer to Cliff Huxtable, than she is our Clair.

Of course, we won't really know who will get a chance to make a first-time appearance at the Golden Globes until December 10, when the nominations are officially announced. But, until then, consider me excited.