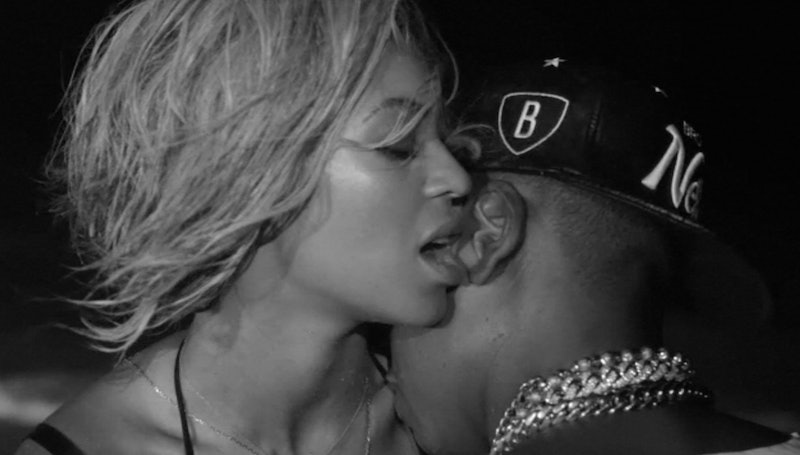 One thing is particularly clear from Beyoncé’s fifth and latest album: she and Jay-Z have phenomenal sex. So phenomenal, in fact, that commoners like you and I may have trouble even understanding all of the sexual euphemisms Beyoncé employs throughout the album. What’s a “surfboard”? What are the precise logistics of “tip me under where you can feel my river flow”? Beyoncé is a dance album. Beyoncé is a pop album. But today, I’m approaching Beyoncé not as an album but as a practical guide to re-invigorating your sex life.

I’m especially drawn to the bathtub idea. Bathtub sex is notoriously uncomfortable, as water can cause undesirable friction, and the bath’s tight, slippery quarters complicate basic logistics like maintaining balance. The key, Beyoncé enlightens us, is filling it up halfway so that all the crucial, erm, parts are above water. For tub relations, Cosmo suggests placing a bath pillow behind your partner’s back, to maximize stability, leaving you to surf and swerve “on that big body,” à la Beyoncé.

Lesson learned: Sometimes it’s okay to objectify your sexual partner and treat him like a surfboard. Bathtub sex can be amazing — try getting on top.

A running theme of the album is that sex can and should be enjoyed in all sorts of places and scenarios: in limos, in the kitchen, on the beach, in the bath, for breakfast. Sometimes, switching up where you have sex can add a wonderful sense of urgency, transgression, passion. In “Drunk in Love,” Jay-Z raps of desire so urgent that he “slid the panties right to the side,” because he didn’t have the “time to take drawers off.”

“Blow,” the most overtly sexual track on the album, is the simplest for me to decode. As you may have guessed, it's about oral sex. The metaphors at play here are candy, flavor, and taste: “Can you eat my Skittles / It’s the sweetest in the middle / Pink is the flavor / Solve the riddle.” First of all, I respect the shout-out to Riddles Skittles, the ultimate Skittles varietal and the candy where The Colors Don’t Match the Flavor.

Candy preferences aside, I’m going to go out on a limb and suggest that “pink-flavored” Skittles represent the clitoris, which is, indeed, an unsolvable riddle for many men. As Beyoncé “leans back” and tells her partner (presumably Jay) to make sure he “cleans that,” the metaphor is clear: lick me until I come.

The song isn’t groundbreaking for its explicit and abundant sexual metaphors; it’s groundbreaking because she’s singing about ladies receiving (and requesting!) oral sex. In fact, she's insisting on it, and thinks you should, too. She’s addressing us when she sings, “This is for all my grown women out there.” And with the lyric, “Don’t worry it’s nothing major,” she attempts to normalize the act, moving us one step closer to a utopia in which women and men receive the same amount of oral. That’s right — Beyoncé is reasserting a woman’s right to life, liberty, and the pursuit of oral sex.

Leaving aside the politics of sex, I’ll conclude this rigorous scholarly analysis of Beyoncé with the issue of pleasure, the most basic element of satisfying sex. Clearly, Beyoncé and Jay-Z have absurd sexual chemistry, and there are no tips or tricks for forcing chemistry. There are, however, simple ways of enhancing pleasure, and the key, Beyoncé tells us, is moisture.

Even after we get out of the bathtub, metaphors of wetness, of wells and waterfalls and rivers, appear throughout the album, most often to represent orgasm. Yet during sex but before orgasm, Beyoncé clearly knows that moisture is crucial; in “Blow,” she croons, “You like it wet and so do I.” As delightful as urgent, unexpected sex can be, sometimes it pays to take it slow, to extend foreplay, or as Bey sings in “Rocket,” to “slow it down / go around / You rock hard / I rock steady.” Varying tempo is key, here.

Lesson learned: Foreplay will increase moisture, and thusly, pleasure. Vary your tempo and take it slow. “Rock it ‘till the water falls.”

Beyoncé exudes sex. And while we may not be able to sing like Beyoncé, writhe in the sand like Beyoncé, or birth the world’s cutest (and most fortunate) baby like Beyoncé, we can dream. And we can let her latest album inspire us to take control of our sex lives.