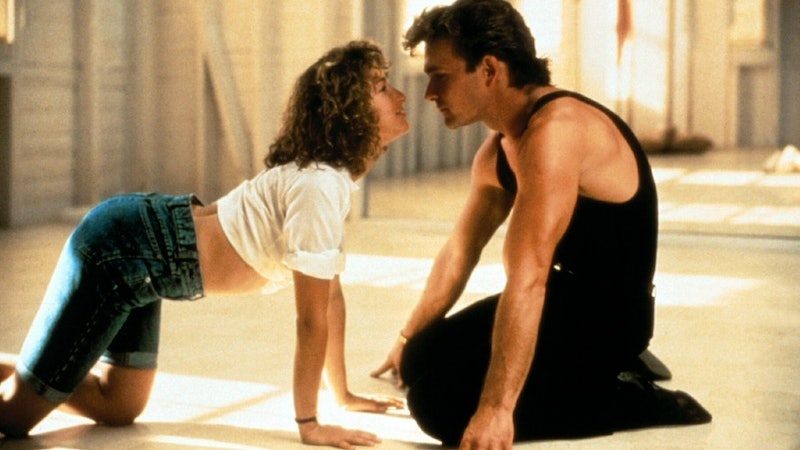 Amazing news for fans of dancing, Scream Queens star Abigail Breslin, and all things ‘80s: A Dirty Dancing movie musical is in the works with ABC, and it was announced on Tuesday that Abigail Breslin will play the lead role of Baby Houseman. The musical will be based on the fan favorite 1987 film that we all know and love, and the news has me all kinds of excited. Namely because there is nothing that I love more than Dirty Dancing, which means this entire venture has all of my dreams coming true. I absolutely cannot wait.

But when I heard the news, I also thought of some questions I have about this adaptation. While I am excited for it, I'm concerned that it could overlook many of the things that made the original film so great — so I have a lot of questions about just how the production team plans on making this movie musical a reality for so many fans, because this Dirty Dancing remake starring Breslin as Baby could be amazing.

So, without further ado, here are all of the questions I have about the new Dirty Dancing movie, whenever it's released:

1. Will The Movie Still Be A Period Piece?

And, if so, what period? It’s easy to forget that this fabulous '80s movie was actually set in the ‘60s, mainly because the hair and makeup is so painfully ‘80s. Will the production team capitalize on that crossover or just go for a more classic '60s look?

2. Where Will They Film The Movie?

All-inclusive resorts are a total thing of the past. Those hotels up in the Catskills are barely managing to stay alive, and the ones that aren’t have fallen into disrepair. I’m sure there are one or two still lurking up in those mountain towns, but they better get to filming fast before the last of them shut down for good.

3. Who Will Play Johnny Castle?

He better be someone who is big and beautiful enough to pull off that lift.

4. How Will They Handle The Abortion Topic?

It’s a totally different world these days, and with a woman running for President, reproductive rights are on the tip of everyone’s tongue. Will the writers make the bit about Penny having a botched abortion a bigger deal, so the reality of what happens when abortion is illegal in society is communicated more directly to modern audiences? The feminist in me is crossing her fingers for a much bigger message from that moment.

5. Will They Use The Same Music?

You know, the soundtrack that you played on repeat on your Walkman from 1990 until approximately 1993? I seriously hope they can get all those musical rights.

7. Will The Dancing Be Even Dirtier?

Modern audiences won’t be nearly as scandalized by the hip shaking as audiences were back in 1987. I wonder if the choreographers will turn it up a notch to make the dancing more relevant.

8. Will Baby Still Carry A Watermelon?

I will honestly stop watching if that line isn’t featured in the movie musical. And prominently.

9. Will They Make The Economic Divide More Obvious?

When I watch Dirty Dancing these days, the only way I know that Johnny is poor is because he tells Baby that. I wonder how the production team will make the cultural divide between Johnny and Baby more obvious to a modern audience, especially an audience that has lived through a terrible recession and an ever-widening economic divide.

10. Will Jennifer Grey Make An Appearance?

Cast her as Mrs. Houseman, for crying out loud!

11. Will Baby’s Virginity Be A Bigger Deal?

Ever notice how they kind of breeze right by this in the 1987 movie? I’m hoping that the modern retelling of this movie won’t fall prey to making this issue way too prominent.

12. Will There Be More Tension Between Baby And Penny?

Because that one three-person dance number didn’t seem like nearly enough to me.

13. Will They Use The Same Dance Moves?

If that final number isn’t move-for-move identical, I am not going to be happy about it.

I guess I’m going to have to wait to find out all of the answers to these questions until the movie premieres on ABC. In the meantime, I’ll be marathoning the original movie on repeat until then. You know where you can find me.