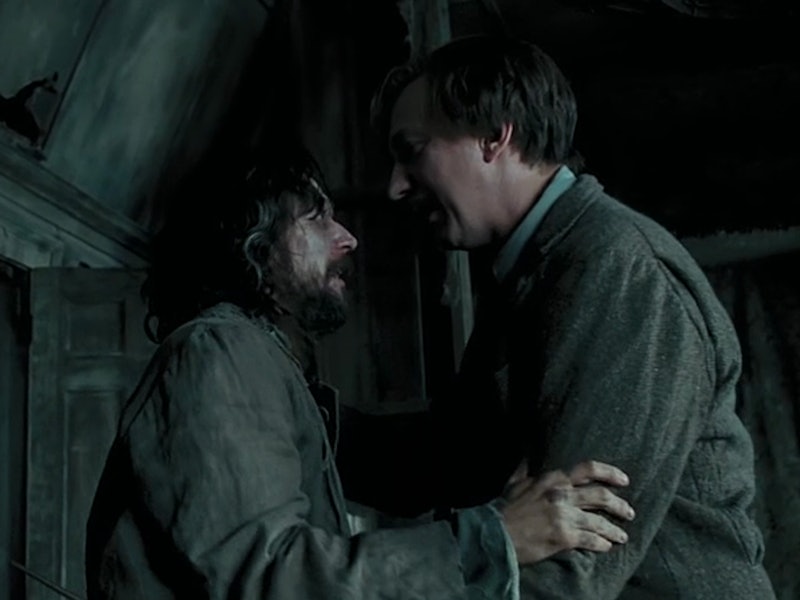 Another day, another Harry Potter theory, but you're going to need a diagram for this one. If it blew your mind to learn that Sirius and Lupin died (at least, on the inside) the night Harry's parents were killed, then it will floor you to hear a theory that's appeared on the Harry Potter Fan Theories Tumblr: Remus Lupin was actually James Potter in disguise. Cue the fireworks emojis.

I know what you're thinking, because when I first read this theory, I though it seemed far-fetched, too. Of all the crazy Harry Potter theories out there — and there are a lot out there — this one seems like one of the craziest. But, like any true (and OK, maybe obsessive) Potterhead, I had to find out more, even if the thought of Lupin being James in disguise seemed unlikely.

First of all, how did this theory even come to be? If we go back to the books — and the fan theory Tumblr page — there are a few clues that point to this seemingly improbable secret. In many ways, Lupin acts fatherly toward Harry, giving him advice when he needs it, and even, as Harry points out in the book, almost reading his mind at times. If it were really James disguised as Lupin, then that special bond would be natural in a father-and-son relationship. And could it be that it was so easy for Lupin to guide Harry based on what he thought James would do because he in fact was James and thus knew exactly what he would want his son to do?

James being alive inside Lupin's body could also explain why, in Harry Potter and the Prisoner of Azkaban, Lupin "positively fled" when Professor Trelawney tried to gaze into a crystal for him. It wasn't out of fear of anyone uncovering the fact he was a werewolf, which the staff already knew, but out terror that his true identity, that of James Potter, would be revealed to all.

Even some of Lupin's more subtle behaviors could point to his true identity of James Potter. At times, he avoided making direct contact with Harry, and "thought better of it" when he almost touched him. Could it have been too painful and too emotional to reach out to a son who can't know his father's true identity? James or Lupin, the body was still a werewolf, and whoever was inside had to keep their emotions in check, for safety's sake.

Despite the theory's merits, this Harry Potter fan still has her doubts. In a world where love is the most powerful magic of all, how can James, even disguised as Lupin, find another true love besides Harry's mother? If you believe that Snape and Lily were really meant to be, then you might believe James and Lily weren't truly in love, but does that mean that James' true love was really Tonks in the end? If you accept this theory as true, than you must also accept that Lupin and Tonks weren't each other's true loves, and let's be honest, they are everyone's #relationshipgoals.

And, if it's James inside of Lupin's body, the body that helped make a baby with Tonks, does that make Harry not only Teddy's godfather, but also his half brother? Things can get a little crazy if we keep going down this rabbit hole.

Aside from my disbelief that the couples in Harry Potter weren't the true loves we were lead to believe, a lot of this theory's evidence can be explained away, or can't actually be explained at all. If Lupin really was James in disguise, why wouldn't he eventually reveal himself to Harry? With Voldemort off radar and Sirius's name cleared, where was the threat? And doesn't it make sense that Lupin, who spent seven years with James at Hogwarts and then some, would know what James would wish for Harry? Of course he would be there for a father-less Harry, that is what friends are for. Lastly, if James was really Lupin, and Lupin was really James, how did they do it? A Switching Spell is mentioned throughout the series, including in Professor McGonagall's Transfiguration class, but even that answer leads to more questions, like why Voldemort didn't think to use the spell ages ago?

Though this theory that James Potter was alive and disguised as Lupin seems to be shaky, we will never truly know until the Queen of Hogwarts chimes (or more likely tweets) in.