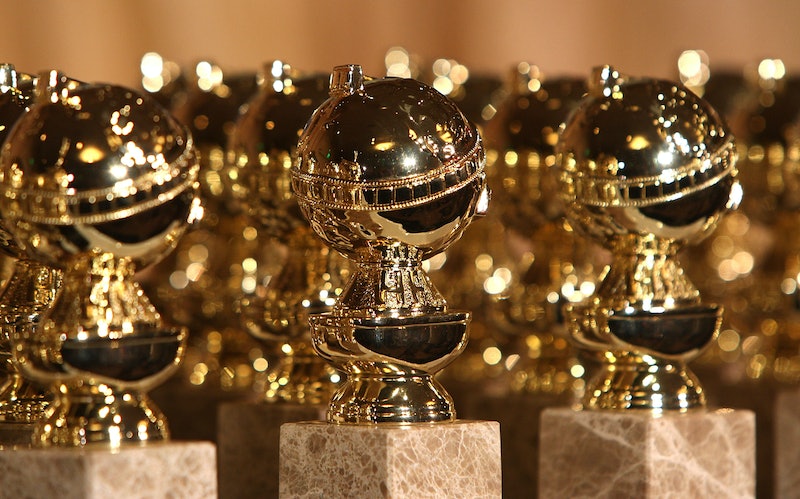 It's the most wonderful time of the year. No, not the holiday season, though that's also nice if you're into cheer. But, for someone who covers pop culture, the end-of-year time signals the start of awards season. First out the gate? The Golden Globes nominations, airing on Dec. 10, when the Hollywood Foreign Press Association (HFPA) will honor what it deems as the best television shows and movies from the past year. So, if you're really into the awards horse-race (and who wouldn't be?), how can you tune in to see the nominees as soon as they're announced, aka what channel are the Golden Globes nominations on? As usual, NBC will broadcast the Golden Globe nominations during the Today show.

It makes sense that NBC would air the nominations, since that network is also broadcasting the 2016 Golden Globes awards ceremony when it airs on Jan. 10. You can also livestream the nominations through the Golden Globes website. Either way, if you're interested, you're going to have to wake up early: The announcement comes at 8:15 a.m. on the East Coast (or a blistering 5:15 a.m. PT). That's a big ask, but here's why it may be worth it to pay attention to this year's crop of nominees.

To See The Presenter

The HFPA hasn't announced who will be the one to actually read the nominations. It could be a regular ol' HFPA member — or we could get a preview of what's to come with an appearance from the award-ceremony host, Ricky Gervais. If it's the latter, you won't want to miss it.

To Get Cracking On Your Oscar Pool

The Golden Globes aren't actually predictors of the Oscars (and they're decided by a smaller number of people than you'd think), but the nominations are still a good way of seeing which movies and performances are drawing awards heat. If you're in a cutthroat Oscar pool like, ahem, some culture writers, you'll want the intel ASAP.

After presents and breakfast, my family always goes to the movies on Christmas Day (and then I use the rest of the vacation to catch up on other movies I've missed out on). But, deciding what to see takes some... negotiation. This year is especially hard, since heavy hitters like Joy, The Revenant, and The Hateful Eight all come out on Christmas. Seeing which of these films are up for awards might help set some priorities.

The Oscars May Be Around The Corner, But Emmy Nominations Don't Come Out Until Summer

Sure, it seems like all of the film awards are all bunched up together, but the television awards are more spread out. If you want to find out what critics have deemed the must-watch tv shows are, the Golden Globes are all you've got until the Emmy nominations come out in July.

To Prepare For The Reign Of Corinne Foxx

The crowning of a Miss Golden Globes is one of Hollywood's weirdest traditions, and yet I'm oddly into it. This year, the honor goes to Corinne Foxx, daughter of Jamie Foxx. She might not put in an appearance at the nominations, but I'm sure she'll say something about the nominees on her Instagram, which you can start obsessively checking now.